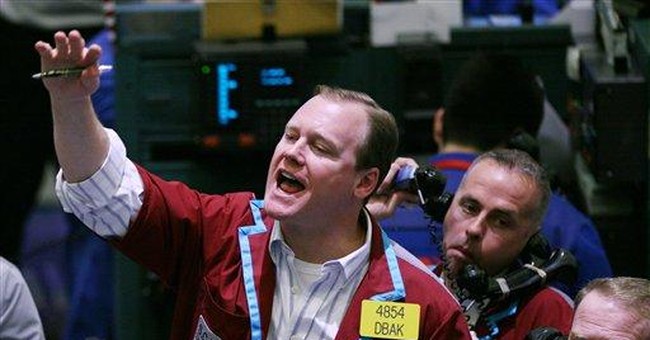 They come with metronomic regularity, these media stories about "soaring" gasoline prices and the causes thereof, news stories which always identify the same two culprits, supply and demand. The stories always give various reasons why supplies are tight -- more often, why prices include a risk premium based on fears that supplies might become tight -- or why demand is higher than it is "should" be, given supposedly high prices.

Today, as the price of a gallon of regular ($2.70 nationally on Monday) "soars" almost to where it was (measured in constant dollars) in 1982, the "news" is: "Drivers Offer a Collective Ho-Hum as Gasoline Prices Soar'' (The New York Times, last Friday). People are not changing their behavior because the real, inflation-adjusted cost of that behavior has not changed significantly, and neither has the cost of the commodity in question, relative to disposable income.

The next wave of stories about "soaring" gas prices will predictably trigger some politicians' indignation about oil companies' profits. The day after Exxon Mobil's announcement that it earned $39.5 billion in 2006, Hillary Clinton said: "I want to take those profits, and I want to put them into a strategic energy fund that will begin to fund alternative smart energy, alternatives and technologies that will begin to actually move us toward the direction of independence."

Clinton's "take" reveals her confiscatory itch. Her clunky ``toward the direction of'' suggests that she actually knows that independence is as chimeric a goal as Soviet grain production goals were.

President Bush proposes reducing gasoline usage 20 percent in 10 years. Perhaps: After the oil shocks of the late 1970s, gasoline consumption fell 12 percent and did not again reach 1978 levels until 1993. This decline was produced by an abrupt and substantial increase in the price of gasoline, which no politician, least of all the president, is proposing. And we actually could get lower prices because the president and various presidential candidates have become such enthusiasts for federal subsidies for ethanol and other alternative fuels. If these fuels threaten seriously to dampen demand for oil, the Saudis might increase production enough to drive down oil prices, in order to make investments -- investors beware -- in alternative fuels even more uneconomic than they already are.

In the 20 years from 1987 to 2006, Exxon Mobil invested more ($279 billion) than it earned ($266 billion). Five weeks after the company announced its 2006 earnings, it said it will invest $60 billion in oil and gas projects over the next three years. It will, unless a President Clinton and a Democratic-controlled Congress ``take'' Big Oil's profits, which are much smaller than Big Government's revenue from gasoline consumption.

Oil companies make about 13 cents on a gallon of gas. Government makes much more. The federal tax is 18.4 cents per gallon. Mrs. Clinton's New York collects 42.4 cents a gallon. Forty-nine states -- all but Alaska -- make more than the oil companies do on every gallon.

In 1979 President Jimmy Carter, an early practitioner of the Oh, Woe! School of Planetary Analysis (today Al Gore is the dean of that school), said that oil wells were ``drying up all over the world.'' Not exactly.

In 1971, according to M.A. Adelman, an MIT economist, non-OPEC countries had remaining proven reserves of 200 billion barrels. After the next 33 years of global economic growth, Adelman says, those countries had produced 460 billion barrels and had 209 billion remaining. As for OPEC countries, in 1971 they had 412 billion in proven reserves; by 2004 they had produced 307 billion and had 819 billion remaining.

Note the adjective "proven." In 1930, U.S. proven reserves were 13 billion barrels. Then we fought a global war, fueled the largest, most sustained economic expansion in human history, and achieved today's electricity-powered ``information economy.'' Today, America's proven reserves are about 30 billion barrels -- not counting the perhaps 15 billion in the field discovered last year in deep water 175 miles off Louisiana's coast.

America produces about one-quarter of the 20.6 million barrels of oil it uses a day. Unfortunately, just as liberals love employees but not employers, they want energy independence but do not want to drill in the "pristine" (read: desolate) Arctic National Wildlife Refuge (potential yield: 10.4 billion barrels) and are reluctant to countenance drilling offshore.

Well, then, what can be done immediately about the gasoline "crisis" du jour? Americans could save 1.2 billion of the 130 billion gallons of gasoline they use a year if they would properly inflate their tires. And they might do that if ever "soaring" prices actually make gasoline unusually expensive.