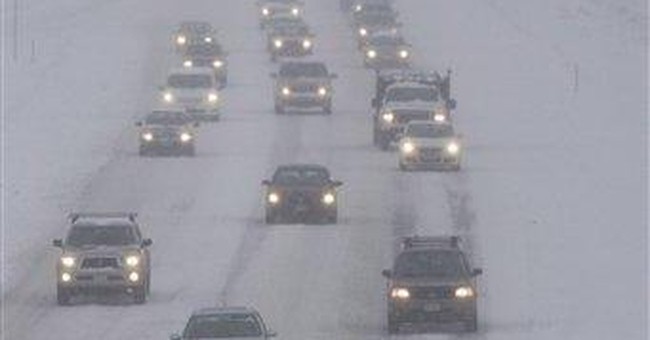 WASHINGTON -- It is peculiar: The secretary of transportation is not a household name. But Mary Peters -- now you know -- is more important than most public officials to improving America's economic dynamism and reducing the aggravation of everyday life.

Traffic congestion is even worse than you think, according to Peters, a fourth-generation Arizonan and a grandmother whose preferred mode of transportation is her Harley-Davidson. In the last 20 years, congestion in the 85 largest cities has caused the number of hours lost each year by the average driver in rush hours to increase from 16 to 47. In the 13 largest cities, drivers are stuck in traffic the equivalent of nearly eight work days. Congestion's immediate and indirect economic costs -- not including lost serenity, family time and civic engagement -- just begin with fuel and wear and tear on vehicles.

In 2009, Peters says, the highway trust fund, largely filled by the federal gasoline tax (18.4 cents per gallon), will go into deficit. Because inertia usually governs the government, Congress might simply increase and index the tax, thereby avoiding two inconveniences -- fresh thinking, and departures from the status quo.

There must be new highways and new lanes on some old ones. But there also must be new ways -- made possible by new technologies -- of using lanes.

The usual scolds -- environmentalists, urban "planners," enthusiasts for public transit (less than 5 percent of the work force uses it) -- argue that more highways encourage more driving ("induced demand") and hence are self-defeating. But as Ted Balaker and Sam Staley respond in their new book on congestion, "The Road More Traveled," among the 10 largest metropolitan areas, Los Angeles has the least pavement per person; Dallas has twice as much per person and half as much congestion. Furthermore, when new schools are built because old ones have become congested, and then the new ones fill up with children from families attracted by new schools, who argues that building the new ones was a mistake?

The congestion crisis requires joining an old material -- concrete -- with new technologies. Toll highways or lanes can do what restaurants and movie theaters do -- use differential pricing to draw traffic to off-peak hours. Peters cites I-15 in Southern California. It uses dynamic pricing, posting on electronic signs the continually varying cost of access to special lanes. Changing the price as often as every six minutes prevents congestion. Another California highway that uses prices posted on a printed schedule has increased traffic flow 40 percent.

When taxpayers pay the gas tax, they do not know what they are buying -- except ``bridges to nowhere'' and other pork. When drivers pay a toll they know exactly what they are getting -- life's most precious scarce thing, time.

Peters says there are large sources of private capital available for investments in transportation infrastructure. Indiana has leased its toll road to a private consortium that will have an incentive -- profit -- to use electronic toll collection rather than human collectors who slow traffic and sometimes cost twice as much as the tolls they collect.

Transportation innovations always have been prerequisites for America's growing prosperity. In 1815, the cost of moving goods 30 miles inland from an Atlantic port, over rutted roads that were impassable in wet weather, equaled the cost of moving the goods across the Atlantic. But soon America's first great transportation innovation, the Erie Canal, reduced the cost of shipping a ton of wheat from Buffalo to the port of New York from $100 to $10. Because of railroads and macadamized roads, the difference between the wholesale price of pork in Cincinnati and New York fell 90 percent.