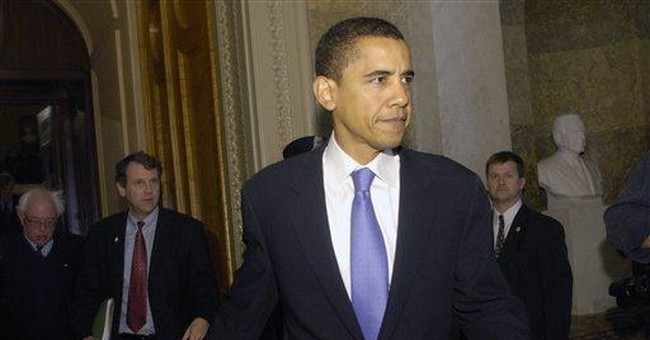 WASHINGTON -- Indiscriminate criticism of President George W. Bush is an infectious disease. Some conservatives seem to have caught it, but congressional Democrats might be crippled by it.

Consider some conservatives' reflexive rejection of the administration's achievement -- with China, Russia, South Korea and Japan -- of an agreement that might constrain North Korea's nuclear weapons program. Voicing the obvious with a sense of originality, critics exclaim that North Korea is a serial liar. And, echoing the equally reflexive disparagement of the agreement by some liberals, these conservatives say it is not significantly different than President Bill Clinton's 1994 agreement, which failed.

The new agreement might not bring Pyongyang to heel. It is, however, unlike that of 1994, in three particulars.

First, China was infuriated by North Korea's October nuclear test which fizzled but expressed defiance of China. So now China seems amenable to serious pressure on its mendicant neighbor, which is substantially dependent on China for food and energy.

Second, the new agreement, like the 1994 pact, is an attempt to modify behavior using bribery. But under the 1994 agreement, North Korea got the bribe -- energy assistance -- before being required to change its behavior. Under the new agreement, North Korea will receive just 5 percent of promised oil -- 50,000 of 1 million tons of heavy fuel oil -- before it must fulfill, in 60 days, the first of the many commitments it has made.

Third, the administration believes it found, in Banco Delta Asia, a lever that moved Pyongyang. The Macau bank was pressured into freezing 52 accounts holding $24 million -- yes, million, not billion -- of North Korean assets because Pyongyang has been using them for illicit purposes. If Pyongyang flinched from being deprived of $24 million -- less than Americans spend on archery equipment in a month -- Pyongyang's low pain threshold suggests how fragile, and hence perhaps how containable, that regime is.

Regarding Iraq, the Democratic-controlled Congress could do what Democrats say a Democratic president would do -- withdraw U.S. forces. A president could simply order that; Congress could defund military operations in Iraq. Congressional Democrats are, however, afraid to do that because they lack the courage of their (professed) conviction that Iraq would be made tranquil by withdrawal of U.S. forces.

So they aim to hamstring the president with restrictions on the use of the military. The restrictions ostensibly are concerned with preparedness but actually are designed to prevent deployments to Iraq.

Suppose Democrats write their restrictions on the use of forces into legislation that funds the war. And suppose the president signs the legislation but ignores the restrictions, calling them unconstitutional usurpations of his powers as commander in chief. What could Democrats do? Cross First Street NE and ask the Supreme Court to compel the president to acquiesce in congressional micromanagement of a war? The court probably would refuse to get involved on the grounds that this is a "political question."

The court has held that some constitutional controversies should be settled by the government's political -- meaning elected -- branches. In 1962, the court said that a case involves a political question when there is:

"... textually demonstrable constitutional commitment of the issue to a coordinate political department; or a lack of judicially discoverable and manageable standards for resolving it; or the impossibility of deciding without an initial policy determination of a kind clearly for nonjudicial discretion; or the impossibility of a court's undertaking independent resolution without expressing lack of the respect due coordinate branches of government; or an unusual need for unquestioning adherence to a political decision already made; or the potentiality of embarrassment from multifarious pronouncements by various departments on one question."

In that welter of criteria there are reasons why the court will not rescue congressional Democrats from facing the logic of their posturing. They lack the will to exercise their clearly constitutional power to defund the war. And they lack the power to achieve that end by usurping the commander in chief's powers to conduct a war.

They can spend this year fecklessly and cynically enacting restrictions that do not restrict. Or they can legislate decisive failure of the Iraq operation -- withdrawal -- thereby acquiring conspicuous complicity in a defeat that might be inevitable anyway. A Hobson's choice? No, Nancy Pelosi's and Harry Reid's.