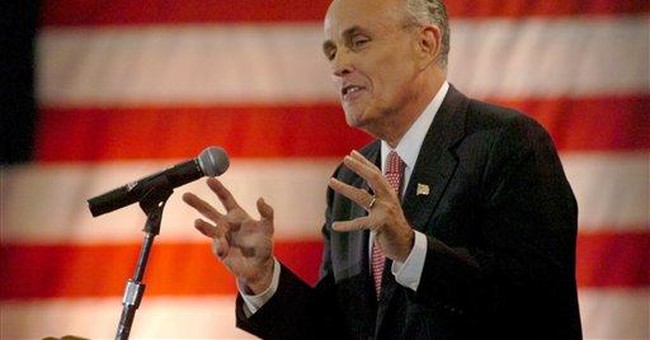 When Steve Forbes was seeking the Republican presidential nomination in 1996, then Mayor Rudy Giuliani ridiculed his proposal to scrap the federal income tax code and replace it with a simple flat-tax. Giuliani called Forbes plan a "mistake" and said if implemented "would really be a disaster."

Despite these smears, Steve Forbes now believes Rudy embraces the flat-tax concept and endorsed him for president claiming he "will inspire the next generation of the Reagan Revolution."

Apparently Forbes forgot that when running for mayor, Rudy Giuliani showcased his liberal credentials and boasted he would "rekindle the Rockefeller, Javits Lefkowitz tradition" of the Republican Party and "produce the kind of change New York City saw with Fiorella LaGuardia and with John Lindsay."

Here's a sampling of the change the Rockefeller-Lindsay brand of Republican liberalism gave New York: During Governor Rockefeller's 14-year tenure, he brought New York State to the verge of bankruptcy. When Rocky entered office, his first budget was $2 billion, when he left office his last budget was $8.7 billion. Thanks to 18 tax increases he signed into law, New Yorkers were the most heavily taxed citizens in the nation and their state had the highest public debt in the nation. Viewing the mess he inherited from Rockefeller, Democratic Governor Hugh Carey said: "I've seen delicatessens in bankruptcy in better shape than the State of New York."

Following in their footsteps, Mayor Giuliani declared that pledging no new tax increases is "political pandering." He also said "when I ran for mayor both times, I was asked very, very often to do the following: Pledge that you will never raise taxes. I refused to do that. Pledge that you will lower taxes. I refused to do that."

When Giuliani endorsed liberal icon Mario Cuomo for governor in 1994, he called the Republican-Conservative George Pataki's 25 percent state income tax cut (cloned from the Forbes-inspired New Jersey income tax cut) "irresponsible" and a "shell game that would hurt everyone in the state."

Forbes points to Rudy's fiscal management of New York City as proof of his conservatism. "Giuliani," he claims, "turned an inherited deficit [$2.3 billion] into a multimillion dollar surplus." It's true that during Giuliani's first term when times were tough, he contained costs and made some tax cuts. But what Forbes failed to point out is that in Rudy's second term, when the economy was booming, he abandoned fiscal restraint and became a big-spending liberal. City budget expenditures jumped 25 percent – twice the inflation rate – and Giuliani left his successor a projected operating deficit of $4.5 billion and New York's citizens with the highest tax burden in any major municipality in America.

Rudy Giuliani, a legatee of Nelson Rockefeller and John Lindsay, fails on every fiscal and cultural issue that are dear to conservatives. And one can only hope that Steve Forbes and his friends will learn before it's too late that life-long liberal Rudy Giuliani is employing conservative rhetoric merely to patronize them.