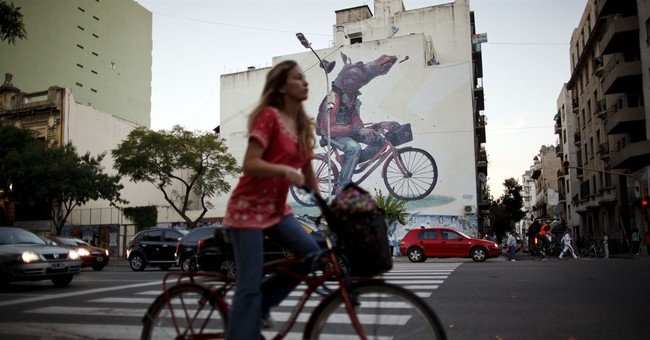 Spain invites endless historical considerations, but on this trip I was struck by something more immediate and prosaic. We were on the road from Granada, near the coast, to Madrid, the capital in the center of the country. It was a four-lane highway, what Americans would call an interstate. The road was clean, well maintained and, as we moved north, nearly empty. Every few kilometers a car would pass in the opposite direction, or we would run alongside another car heading north.

It was not the paucity of cars that struck me; it was the almost complete absence of trucks. This was, after all, the road from the coast to the capital, not the only road but still a significant one. It was early afternoon on a weekday. The oddest moment came when we reached a tollbooth not too far from Madrid. There was only one booth open and when we pulled up there was no one in it and no coin or credit card slot. We waited, then we left. Perhaps the attendant was in the bathroom. Perhaps the revenue didn't justify paying a toll taker. Perhaps this was one of the austerity measures they had taken.

I will never know. What I do know is that the drive had a sort of post-apocalyptic feel, except that it was very clean. We marveled at it and then realized that there was nothing that ought to have surprised us about it. The unemployment rate in Spain is more than 27 percent. Gasoline costs 1.4 euros a liter (more than $6.50 a gallon). At that price, a drive is no longer a casual undertaking; it has to justify itself. As for trucks, when that many people are out of work -- and have been for many months -- the demand for goods declines to the point that trucks will be rare on the road.

I should have been prepared for this. We stayed in a very nice hotel in Granada. In the morning when we left the hotel, there was a beggar sitting on the sidewalk, his back to the wall, to our right. We paid little attention. Beggars are not uncommon in Europe or the United States. But there is an aesthetic to beggars. They look a certain way, owing to alcohol, madness or a very long time in trouble. When we returned in the late afternoon, he was still there. He was in his mid-to-late 20s, wearing glasses and reading a book. He was dressed in khakis and a decent shirt. He wasn't mad, he wasn't drunk and he wasn't like the hippies of my youth. He wasn't playing an instrument. He was sitting, absorbed in a book and begging. There were other beggars in Granada of the more conventional sort but also several more who looked like this one.

There is an argument that says Spanish unemployment is not as bad as it seems because a huge amount of it is youth unemployment. It is implied that youth unemployment has less social consequence. Certainly, it is more immediately destabilizing to have the head of a household with children out of work, but when -- as some say -- 57 percent of those under the age of 25 are unemployed, it also has consequences. Older people get bitter, despair and tend to be fatalistic with what life dealt them -- or at least a lot of them do.

A 22-year-old becomes desperate. When a young man is unemployed because he is a musician or an artist awaiting discovery or because he has lived carelessly, that's one thing. But this is different unemployment. It is a generation whose dreams are shattered. They may have hoped to be a businessman or a craftsman, but that's not going to happen now. Unemployment of this sort doesn't go away in a few months or years. This is the level of unemployment the United States experienced in the Great Depression, the kind of unemployment that scars an entire generation. World War II solved the unemployment problem in the United States, but there is no global war on the horizon for Spain. Imagine what would have happened in the United States if the war hadn't come and the Depression had lasted 20 years.

No one knows how long this will last but everyone suspects that it will be a long time, and I share that suspicion. How do you accept a situation that says you, at the age of 22, will live on the margins of society along with half of your friends? More important, how do you live with that fact if you worked hard preparing for a career?

Failures that are caused by living carelessly can be managed. The very carelessness of the life makes the consequence nearly morally required. Some people in every generation fail and fall to the bottom rungs of society because, well, bad things sometimes happen. Those people do not constitute a social force. But when nearly half a generation, most from middle-class families, finds itself at the bottom, there is no explanation to provide solace. In its place there is, quite reasonably, a sense of victimhood. Whatever explanation one gives for the Spanish crisis -- the stupidity of politicians, the laziness of the public, the greed of bankers or whatever else -- the generation that is bearing the burden is the only one that is not guilty -- at least not yet.

This -- being the victim in personal calamity shared by half a generation -- is the foundation not just of political instability but also for the politics of rage. The older middle-class citizens, with the lives they thought they had secured shattered, hurled into the ranks of the permanently impoverished, represent the vanguard, if you will. But those who will never live the lives they thought they would, they are the explosive mass.

I think the reason things are so calm -- occasional riots hardly count -- is that no one really believes that they won't awake from the nightmare. There is a firm belief that this period will end. The denial of what has happened is not confined to Spain. In speaking to a German, he declared my view that the European system is broken as "scandalous." A moderate official in the European Union, he became choleric at my assertion that countries such as Spain are being plunged into the kind of hell that creates political monstrosities in Europe. For him, the critical thing was that the banks were no more stable than ever. He was simply dismissive of unemployment as the problem. Most people dismiss my views with aplomb, without breaking into a sweat. I have learned that on the rare instance when I cause apoplexy, it's because what I have said is not too far from the other person's fears.

Far more interesting than the German official was the Spanish official at the European Union. He was equally enraged when I argued that the social (it is not beyond either a financial or economic) crisis was not going to be solved in the current framework. In almost the same words -- and the exact spirit -- as the German, he insisted that the problem would not only be solved but that he was working on it day and night and was very close to a resolution. From this I conclude that it is perhaps not just the Germans but the entire EU apparatus that either really believes a solution is imminent or simply doesn't want to consider the consequences of failure.

Another Spaniard, this one not a government official, said he missed Francisco Franco, the fascist dictator who won the Spanish Civil War and governed for decades. I was surprised to say the least, since Spain under Franco was even poorer than it is today. He explained that he missed Franco because he knew how to tell the Germans to go to hell. When Hitler asked Franco to join him in World War II, Franco refused. The Spaniards' desire to tell the Germans to go to hell is too easy. Even if this was all Germany's fault, which it isn't, Spain's problem wouldn't be solved.

The German problem is the European problem and vice versa, and so it has been for a long time. Ever since 1871, when Germany was unified, Germany and Europe have been struggling with the question of how to live with each other. They thought they had found the answer in the European Union -- and maybe they will, but not yet. Europe does not know how to live with a Germany that uses the free trade zone to surge its exports while blaming Europe for being lazy and shiftless. Germany does not know how to live with a Europe that does not see that all of its problems are due to its lack of industriousness.

Of course, to our 22-year-old in Spain, the debate has become irrelevant. He is broke, scared and bored -- not something you want a mass of young men to be. That is the point at which history turns. Over time, they become men with nothing to lose; they become violent men, trying to reshape the order by any means necessary. Looking around the violent parts of the world, it is young men with nothing to lose and fantasies of glory, led by older men who understand them and their needs, who wage the civil wars that tear countries apart.

Driving in Spain, things look quiet, neat and empty. But in that emptiness there is something ominous, perhaps not so much post-apocalyptic as pre-apocalyptic. Spain is still under control, and the European elite still believe an answer will be found. But I don't see the path that leads to the redemption of a generation's hopes. There is time, but in my mind there isn't enough. And given the attitude of the Eurocrats I have met, there is no sense among the elite that time is running out.