Twenty Years After "Tear Down This Wall" 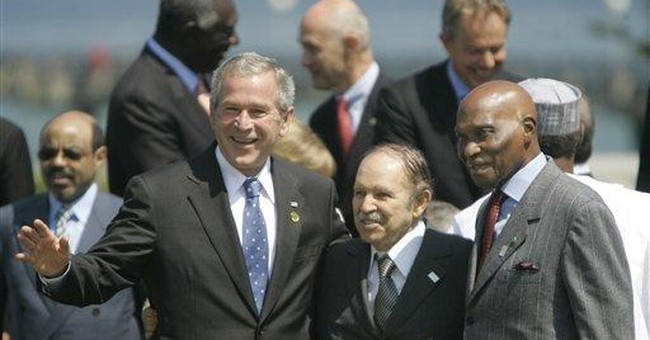 On June 12, 1987, President Ronald Reagan declared, "Mr. Gorbachev, tear down this wall!" It was our generation's equivalent to "Remember the Alamo!" This month we celebrate the 20th anniversary of this wonderful declaration for the cause of freedom on behalf of repressed people in Central and Eastern Europe. We should renew our shared commitment with our allies in Europe because it is the transatlantic relationship that is America's anchor for global engagement.

Although Ronald Reagan's words must have seemed like only a dream, they resonated in the hearts of East Berliners who led restricted, hopeless lives. The dream of freedom did come true because of the steadfast, essential political and logistical support of Prime Minister Margaret Thatcher and Chancellor Helmut Kohl. The moral compass was provided by the respected Pope John Paul II. And Lech Walesa, behind the Iron Curtain in Poland, had freedom lovers all over the world in solidarity with their cause.

Since the fall of the Berlin Wall in 1989, it has become clear how beneficial a free, prospering, and whole Europe is to the transatlantic community. Germany is no longer a borderland. Many of the Central European states have joined us in Iraq and Afghanistan. But a central challenge today is Americans' and Europeans' lack a unity of purpose and shared definition of the threats we face.

President Bush embarks this week on a trip to a free Europe. On this trip—he is visiting Germany, Poland, Italy, Czech Republic, Albania, and Bulgaria—he must make clear to European partners that American leaders see the transatlantic relationship as our anchor for global engagement. He must also identify steps America and Europe should take jointly to address our shared challenges and worldwide threats.

Counter-terrorism. Today's war on terror is global, and America's efforts are strengthened by our allies. We need Europe's help and capabilities now more than ever. Our model should be the cooperative spirit in which the Taliban was toppled in Afghanistan through the joint efforts of the United States, Europe, and our Afghan allies.

Russia. Russia has the potential to have a tremendous positive relationship with its neighbors, however the Kremlin's intimidating tactics against Estonia and the latest cyber attacks emanating from Russia are of serious concern. Russia should join Europeans in embracing freedom and prosperity. America and Europe must speak clearly to Russia; while Russia's international integration is highly desirable, Russia must realize that undercutting the sovereignty and independence of neighboring states is not acceptable.

NATO's future. Since the world is now a cooperative concern, responsibility for global stability challenges fall on both the U.S. and Europe. NATO's future role needs to be clearly defined, and NATO should identify an harmonious agenda that continues to build on NATO's constructive role in the Balkans. The process of NATO expansion was a positive and tremendous motivator for reform in the post-communist states, and that process should continue.

The Europeans themselves are moving toward greater unity with the selection of Poland and Ukraine as hosts of the 2012 European Soccer Championships. This major European event will create a new major highway through these countries, and with the building of new stadiums, U.S. companies should look to assist in these projects. Russia, with its enormous energy reserves, will be more prosperous and ought to see the benefit of cooperation with Europe to diversify and improve its economy as a credible free country with reliable rules of law. As President Reagan vouched concerning our missile defense system: we can share aspects of the defense system with a cooperative, trustworthy Russia.

As we face, adapt, and decide our future action against present day threats, let us learn from Ronald Reagan's resolve to advance freedom. Based on shared values, let us build respectful, strategic alliances, expand beneficial interaction and private investment, creating more jobs, and always choose to stand strong together for freedom as we nurture the growing trees of liberty and plant new groves in Eastern Europe. The United States must have a dynamic, strategic agenda befitting a great power.