The Darfur Genocide and Global Warming 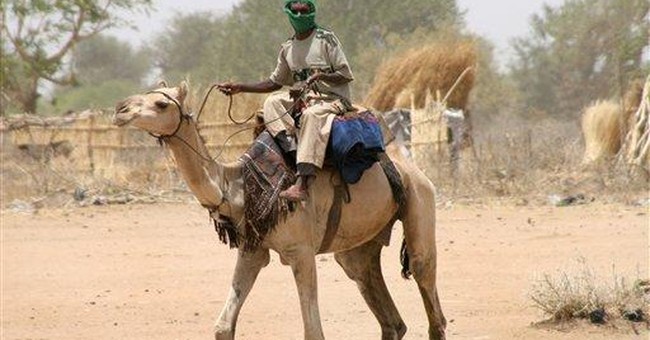 Recently, the new UN Secretary General Ban Ki-moon said that the root cause of the current genocide in Darfur is … global warming. Now if you've been following the tragedy of the Darfur region in the African nation of Sudan, you know how absurd that statement is.

There's not room here for even a good summary, but let me make a few points. Sudan straddles the line between Christian African and Muslim Arabic cultures, bordering Egypt and Libya on the north. Bloody regional warfare stretches back centuries but, in modern times, the country has been in pretty much of a constant state of war since the 1950s. It's safe to say that millions have died in wars that are often aimed at control of the rich oil fields in the South. Today, however, the vastly reduced African Christian population isn't even involved. Two Muslim factions, divided along racial lines, are fighting for control of Darfur.

Now it’s true that the return of cyclical droughts has made agriculture and life more and more difficult for the people in the region. The impact of the weather, however, doesn’t approach the destruction that generations of warfare have worked on the land and the people. With peace and freedom, the economy of Darfur could have easily adapted to any climate change – no matter the cause.

Why, then, would the new UN Secretary General blame climate change? I think it’s pretty obvious.

Blaming the Islamic government and groups that have manipulated events in Sudan will get him nothing but enemies. Blaming global warming, however, is basically the same thing as blaming America. America is by no means the only major source of greenhouse gases, but we've taken the most political heat. The reason is that congress rightfully balked at ratifying the Kyoto international climate treaties during the Clinton presidency.

There is simply no downside to blaming America, because Americans don't punish their ideological foes. From the UN, we don't even require sanity sometimes. And there might even be an upside to blaming us, since there are Americans who suffer from such ingrained feelings of guilt, they’ll support increased aid to both the UN and Sudan.

There is a lesson to be learned here, though. UN Secretary General Ban Ki-moon is arguably the most powerful man in the international community today. We know he's unwilling to blame those who actually gave the orders to commit genocide in Darfur. And apparently he's happy to shift the blame for ongoing deaths to those living peaceful, productive lives in the West.

Now hopefully we can work toward international cooperation with regard to environmental policies that make sense. It’s not very encouraging though when the head of the world’s leading international body uses climate change as an all purpose excuse in order to avoid hard realities.