The Queen and Free Speech 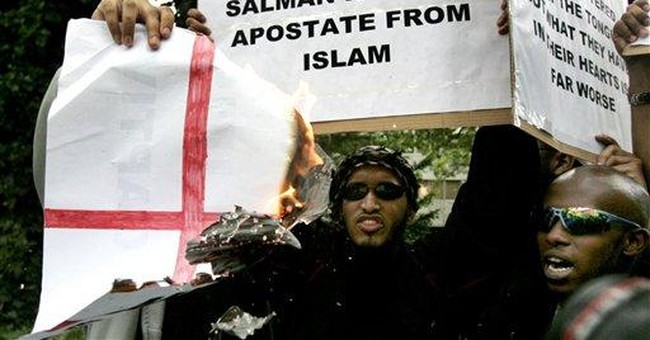 Last week, I was fortunate enough to spend some time in London. Being there, I couldn't help but think how much America owes to British culture and traditions. Even our past disagreements, like that “taxation without representation” thing, had their roots in British thought. The American Revolution can, in fact, be traced directly back to ideas set forth by the great British thinkers such as John Locke and Adam Smith.

For our part, I think what happened in the 13 colonies actually helped the British rid themselves of the “divine right of kings.” Perhaps because of the fact that we fought a war to escape undemocratic monarchy, Americans are sometimes puzzled by Britain's maintenance of royal institutions and traditions.

I've got to admit, though, that I’ve seen things in a slightly different light recently. The efforts by the two princes, Harry and William, to fight in Iraq impressed me. I was also impressed by the knighthood of author Salman Rushdie and the British reaction to the predictable outrage that followed.

That's not to say I'm a big fan of the British-Indian novelist. I don't agree with a lot of his criticism he's made of America and the UK in the past. But that's the point, really. In the West, we can disagree strongly with someone without issuing fatwas and calling for his death. We can even honor someone with whom we disagree.

In 1989, when Rushdie was first threatened with death by the Islamic regime in Iran, it was for saying far less critical things about Muslims than he’d said about American Christians. Since then, he's become a much stronger critic of Islamic intolerance and authoritarianism. Rushdie defended, for example, the publication of the Danish cartoons and has called for ending the oppression of women in Islam.

While Queen Elizabeth doesn't actually select those who’ll be knighted, lending her name to the honor is symbolically powerful. She and the honors committee who have put the "Sir" before Rushdie's name had to have known that it would provoke anger among those who believe Islam should be protected from criticism. Furthermore, Rushdie had to have known that accepting the honor would prompt renewed and serious calls for his murder -- and it has.

Already, Britain's Home Secretary John Reid has responded to a Pakistani government minister's comment that Rushdie’s knighthood justifies a suicide bombing on the writer. Standing by the knighthood, Reid reminded his international audience that the West tolerates movies made by Monty Python and Mel Gibson even if they offend Christians and Jews. Reid said that, "in the long run, our protection of the right to express your views in literature, argument (and) politics is of over-riding political value to our societies."