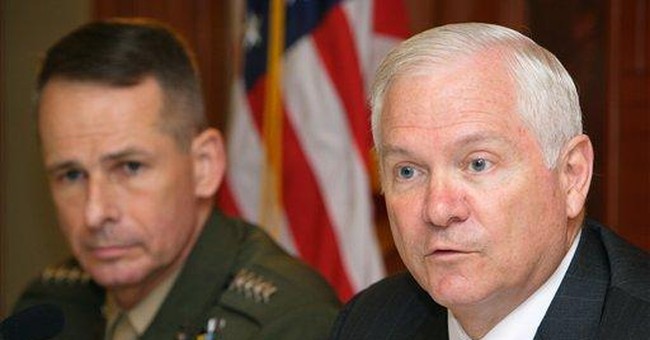 First, Harry Reid voted for the war, like a majority of our legislators. America decided as a nation to free Iraq and the region from Saddam Hussein's tyranny. I have friends, both Democrat and Republican, who questioned the decision at the time, but the Republic made a commitment based on constitutional and democratic procedures. So they are now a hundred percent committed to moving forward in a way that’s best for our country. None of them, by the way, believe surrendering to the forces of terror in Iraq is what's best for our country.

Harry Reid, though, has taken a different route. He made his statement about General Pace on a conference call with fringe elements of the blogosphere who think we're the bad guys. This is a place where even those who think the 9/11 attacks were an inside job find a home.

And why shouldn't they think that? Reid has led the attack on the administration, with Nancy Pelosi, charging it lied and tricked America into supporting the war. Ignoring multiple hearings and investigations into pre-war intelligence findings that have debunked this paranoid myth, they accuse an entire administration of conspiracy to trick us into a war.

I suppose that's easier for some than admitting that they've flip flopped -- but the fact that Reid says this sinister Republican plot is going to help him elect more Democrats ought to be raising a few flags. Saying General Pace is incompetent doesn't even rank near the top of his bizarre statements.

How could anyone possibly believe, as Reid charges, that our commanding general in Iraq, David Petraeus, is out of touch with what's going on. Surely someone in Reid's position would know that Petraeus is briefed daily on all aspects of Iraq -- from civil to military. Surely he has to know that Petraeus is a true warrior scholar who literally wrote the Army's book on counterinsurgency warfare.

But Reid's comments are not meant for logical analysis. He proclaimed the war lost some time ago, and the surge as a failure even before the additional troops were on the ground. The problem is that every one of Reid's comments I've noted here has also been reported gleefully by Al Jazeera and other anti-American media. Whether he means to or not, he’s encouraging our enemies to believe that they are winning the critical war of will.