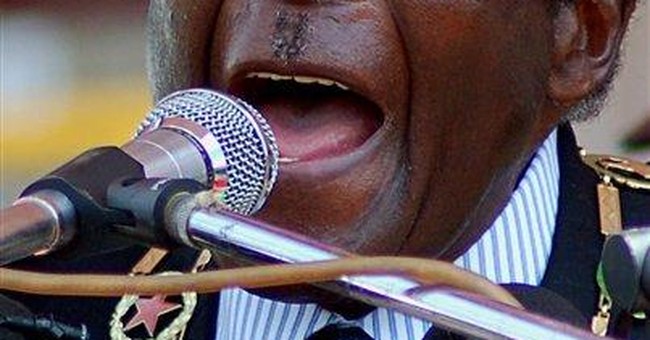 If there's a hell on earth, it's probably Zimbabwe. Life expectancies in the landlocked nation in the South of Africa are the world's lowest. Reports say women live an average of 35 years; men a bit longer. Four in five people are unemployed. Government printing presses run day and night to produce enough money to keep the military from rebelling, so inflation is at an annual rate of 3,700 percent and rising. Cash loses over ten percent of its value everyday.

It wasn't always that way. Before Robert Mugabe's government took power a quarter of a century ago, this land was one of the most prosperous in Africa. Known as the breadbasket of south Africa, it exported food to the rest of the continent. Then Mugabe was elected. He used his office to destroy his own market economy, silence the press, murder his opposition and persecute minority ethnic groups, black and white alike. Zimbabwe was, by any account, the most disastrously managed economy on the planet.

The reason I want you to take note of that is that, last month, the same United Nations elected Mugabe's Zimbabwe to lead the UN Commission on Sustainable Development. That's the organization charged with promoting sound long-term economies.

Now you might ask why a country in economic freefall would be chosen by the UN to advise the rest of the world about economic growth. But you might also ask why Iran was made vice-chair of the UN Disarmament Commission last year -- even as it ramped up its nuclear weapons program and threatened to destroy Israel. Or, for that matter, you might wonder why Libya was made chair of the Commission on Human Rights -- as Libyans don't even have basic democratic rights.

The UN never seems to have good answers, but I'll offer one. Robert Mugabe was given chairmanship of the commission because his view on sustainable development fits right in with much of the UN's.

He claims that third-world poverty is caused by free market economies like Americans’ -- and like the one that once made his country the envy of his region. He blames free and prosperous countries for the suffering that comes with tyranny and corruption. The sad thing is; Mugabe gets away with it, in part, because he has the glamour and prestige of the UN behind him.

Now we have to keep in mind that while the UN is hopeless in some respects, a Security Council vote provides political cover for some timid nations to do the right thing -- like help us in Iraq. Also, UN humanitarian assistance, like the World Food Program’s, run by Americans, do much good. But it’s a constant challenge at the UN, and the reason we must always have a strong ambassador there willing to blow the whistle when they do outrageous things.