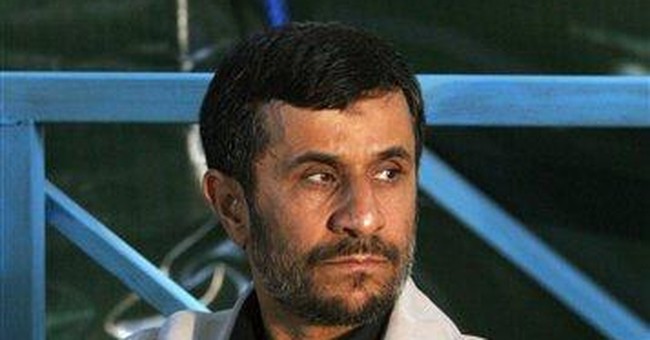 When Iran abducted 15 British citizens from Iraqi waters in March, the world knew about it. The regime used the hostages for their own underhanded propaganda purposes, but they were at least released. Last week, President Bush called for the release of Americans that almost no one knows are being held hostage in Iran.

When the British sailors and marines were kidnapped, some analysts said that they were second-choice hostages -- that the Iranian management really wanted Americans. Intelligence reports indicate that at least one attempt was made in Iraq to grab a small group of American soldiers, though they fought back and escaped.

Tehran's solution was to look for Americans unable to fight back. They arrested four Iranian-Americans visiting Iran to see family or arrange humanitarian assistance for that country. They pose no threat to Iran, but have all been accused or charged with espionage, as were British hostages. This is a serious charge made specifically to remind the world that they could be executed.

A fifth American, in Iran on business, has disappeared entirely. Most think he is also being held by the government. He may be in the greatest danger because his name sounds, at least, Jewish. In a country that officially holds Jews responsible for all the world’s ills, this is a serious problem.

Kidnapping and hostage-taking have been the hallmark of this regime since it came into power. Unfortunately, it has never paid a serious price for the tactic -- even the holding of embassy personnel during the Carter administration. Having gotten away with it for so long, I suppose it's not surprising that they continue this activity. Journalists and human rights activists in Iran are also reminded that they can be punished if they say anything that might be read as support for democratic reform.

In reaction to the President's statement, Iran has condemned America for interfering with its "internal affairs." This has been a favorite line of tyrants for as long as I can remember.

There’s a silver lining here though. Everyday in every way, Americans are learning exactly what we’re dealing with here. It’s valuable information for those who may be tempted to think that, in order to end hostilities, all we have to do is sit down across the table from these guys.