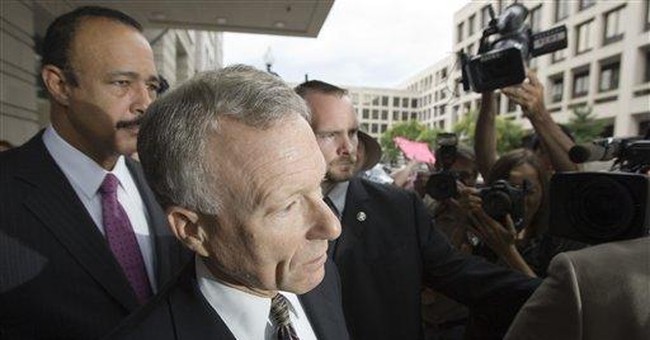 The sentencing of Scooter Libby was the last in a series of acts that has resulted in a shocking injustice – one created by and enabled by federal officials. As I’ve been saying for many months, this is a “he said-she said” case about political infighting that would have never been brought in any other prosecutor’s office in America.

The CIA started the ball rolling by sending the Democratic partisan husband of one of its employees to Niger on a sensitive mission. Knowing an opportunity when he saw one, he returned and blasted the Bush Administration (the fact that he blatantly falsified a few important things along the way is another story). It should not have been a shock to CIA officials when people then asked, “Who is this guy and why was he sent to Niger?” The only mystery in Washington is why the CIA employee-wife’s name, Valerie Plame, took as long as it did to leak.

Nevertheless, the CIA demanded that the Department of Justice investigate the leak of her name (not surprisingly, the fact that the CIA was making such a request was leaked). This put pressure on the DOJ. The DOJ, in turn, promptly caved to the media and Congressional pressure to appoint a Special Counsel to investigate the Plame leak. However, there were two glaring problems for anyone with a sense of justice, or who may have gone to law school for one semester.

The Justice Department and the new Special Counsel knew that: 1.) The leaking of Valerie Plame’s name did not constitute a crime because she was not a “covered person” under the relative criminal statue and, 2.) They already knew the name of the leaker: State Department official Richard Armitage.

Yet small matters such as these do not matter much to Justice Department officials trying to cover their own fanny, or to a newly minted Special Prosecutor with a reputation to make and members of the media to satisfy.

Special Prosecutor Patrick Fitzgerald proceeded to make public statements and employ tactics that would have brought condemnation in any other setting. He moved heaven and earth for a year and a half in order to come up with some sort of “process” crime against a high-level Administration official -- so that he could try them in one of the most anti-Bush Administration places in America, Washington DC.

The best he could come up with was a man who was not well known to the public, but who was basically working two full-time jobs after 9/11 -- trying to prevent such a thing from happening again. The White House physician says that, “Mr. Libby worked himself to exhaustion day after day reviewing national intelligence estimates.” Of course, he had to make time for hours of testimony before Fitzgerald’s grand jury and Fitzgerald found inconsistencies. At trial, practically every government witness not only was inconsistent with other government witnesses, but was inconsistent with regard to their own prior testimony.

During his closing arguments, Fitzgerald did what has caused many a prosecutor to get a mistrial: He asked the jury to consider “facts” that had not been placed into evidence or proven in any way. It was so egregious it was even too much for the judge, who admonished him.

Mr. Libby was convicted of perjury and false statements. For sentencing, the federal probation office filed a statement that the applicable federal guidelines called for a sentence of from 15 to 21 months. He also identified several grounds for what is known in the law as a “downward departure” from that range. In this case, Mr. Libby had led an exemplary life, and had sacrificed in order to serve his country and will presumably lose his law license. In other words, under the law, the judge would have had ample reason for giving Mr. Libby less than 15 months, including probation.

Fitzgerald, seeing this probation report and reverting to form as someone without professional judgment or scruples when it comes to landing his prey, weighed in. Throughout the trial, Fitzgerald insisted that Valerie Plame’s status was irrelevant and that the defense could not use her status in any way. But now that it came time for sentencing, Fitzgerald insisted that her status be considered, and that Mr. Libby be treated as if he’d violated the law he’d never even been charged with.

Proving once again that Fitzgerald can get away with practically anything in Washington, the judge apparently accepted Fitzgerald’s argument, contrary to all notions of basic fairness. The judge rejected his own probation office’s recommendation, not only doubling the 15-month minimum to 30 months, but also fining Mr. Libby $250,000 and giving him 400 hours of public service. Apparently, the judge is going to make Mr. Libby start serving his sentence in the near future, before he can get his appeal heard.

Unfortunately, this is an example of what Washington is all about these days. All too often the intersection of politics, law and the media results in a lack of responsibility by practitioners in all three areas. Having all this crashing down on the head of one man and his family, in a time when national security leaks are published regularly on the front pages of the newspapers without consequence, will justifiably add to the cynicism and outrage on the part of all observers.

For the preamble to our Constitution, our founders stated explicitly the purposes for our Constitution. Listed even before providing for domestic tranquility or for the common defense was the establishment of justice. Official behavior, with regard to matters like the Scooter Libby case, are not what our framers had in mind. Now this excessive sentence, given by the Federal District Judge is just another in a long line of reasons why Mr. Libby should be pardoned.