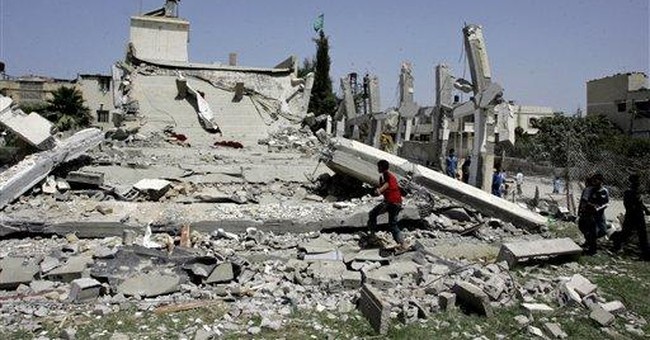 Let me ask you a hypothetical question. What do you think America would do if Canadian soldiers were firing dozens of missiles every day into Buffalo, N.Y.? What do you think our response would be if Mexican troops for two years had launched daily rocket attacks on San Diego -- and bragged about it?

I can tell you, our response would look nothing like Israel's restrained and pinpoint reactions to daily missile attacks from Gaza. We would use whatever means necessary to win the war. There would likely be numerous casualties on our enemy's side, but we would rightfully hold those who attacked us responsible.

More than 1,300 rockets have been fired into Israel from Gaza since Palestinians were given control two years ago. Israelis, however, have gone to incredible lengths to stop the war against them without harming Palestinian non-combatants. But make no mistake, Israel is at war. The elected Hamas government regularly repeats its official promise to destroy Israel entirely and replace it with an Islamic state. Hamas openly took credit for killing one woman and wounding dozens more last week alone.

The Palestinian strategy is to purposely target and kill Israeli civilians. Then, when Israel goes after those launching the attacks, Palestinians claim to be the victims. If Palestinian civilians aren't hurt in the Israeli attacks, they stage injuries and deaths. Too often, they garner sympathy and support from a gullible or anti-Semitic media in the international community.

Israelis, themselves, are often incapable of facing the damage they inflict in self-defense. Knowing this, Islamic extremists are using their own populations as human shields.

I'm beginning to wonder how much longer this vicious plot will work though. International sympathy for Palestinians has diminished as the same Islamofascist extremists have brought havoc to Madrid, Bali, Somalia, London and elsewhere. More importantly, Israelis themselves are suffering so badly, they may be on the verge of losing their sympathy for the people who have sworn to kill them.

Imagine what it would be like to live, knowing that a rocket could fall on you or your children at any minute. Half of those who live nearest to Gaza have fled their homes. Those remaining are traumatized by daily warning sirens and explosions.

The irony is that Israel has the military might to easily win the war that is being waged against them today. They haven't used that might, in the past, out of compassion for Palestinian civilians and because it could trigger a wider regional conflict.

That balance of power is about to change, though. If Iran develops nuclear weapons, the very existence of this tiny nation of Israel will be threatened. The Iranian regime has left little doubt that it intends to see Israel "wiped off the map.” Hamas is using the same language, not coincidentally, and has announced it will begin launching missiles into Israel from the West Bank too.

If the world doesn't act to stop Iran's nuclear ambitions, it must be prepared for the consequences of Israel defending itself.

Did Democrats “Outside” The Biden Campaign Sabotage Him By Pushing Kamala Harris as VP?
Redstate
Eric Trump posted a video of Robin Williams joking about Biden, then Zelda responded
Hotair