To the Shores of Tripoli 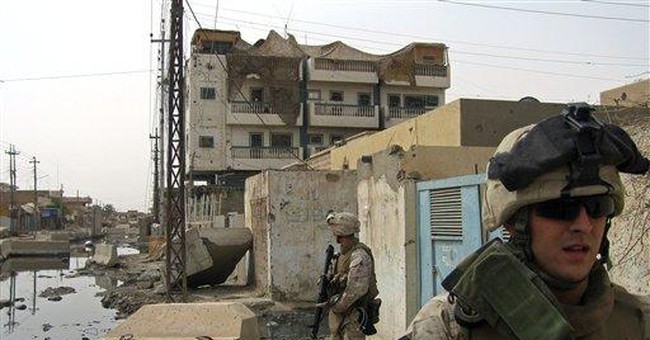 From the Halls of Montezuma to the Shores of Tripoli.
We fight our country's battles in the air, on land and sea.
First to fight for right and freedom, and to keep our honor clean;
We are proud to claim the title of United States Marine.

That’s from the Marine Corp Hymn, of course, and you can thank me for not singing it. When I was a boy, a lot of America kids knew that verse -- and probably a few more. I hope they still do, but I get the impression that might not be the case.

That's one reason I'd like to spend some time talking about the heritage this song represents. Another reason is that the lyrics hold a history lesson critical to America’s future. I realize a lot of you already know this material, but indulge me for the sake of those who might not.

The very first line written for the Marine Corps Hymn, about the shores of Tripoli, refers to America's first foreign war. After the Revolution, U.S. ships were sailing the world in search of trade without British protection. With no real navy to protect our merchants and travelers, American vessels and citizens were being targeted for looting, enslavement and ransom. The enemy was the so-called Barbary pirates -- agents of the North African provinces of the Ottoman Caliphate.

Ransom and protection money were demanded and paid. Stories of terrible treatment of American men and women in the dungeons of North Africa were well known. Behind it all, the country was having a pro- and anti-war debate.

On the one hand were those who took the "no blood for trade" approach. They had legitimate concerns about the cost and political impact of maintaining a standing military. They favored negotiations and payments rather than fighting. For a long time, their side was winning the argument. In 1786, Thomas Jefferson and John Adams even went to London to negotiate directly with the envoy from Tripoli.

Several historians and writers have reminded us recently of the ambassador’s nearly forgotten answer. Fortunately, Jefferson prepared a written report for the government and left other records of the incident. Here’s a description from The Atlantic Monthly in 1872:

“Disguising their feelings as best they could, they ‘took the liberty to make some inquiries concerning the ground of the pretensions to make war upon nations who had done them no injury.’ The ambassador replied that it was written in their Koran, that all nations which had not acknowledged the Prophet were sinners, whom it was the right and duty of the faithful to plunder and enslave.” He claimed every one of their guys who was “slain in this warfare was sure to go to paradise."

This answer may have helped sway the debate to the side of those who favored military response over further attempts at diplomacy. Some believe it had a personal impact on Jefferson himself, though higher and higher ransoms probably helped too. Congress finally acted, creating the US Navy in 1794. This included approval for the construction and manning of six frigate warships, including the USS Constitution -- which is afloat and commissioned to this day.

Still, though, congress refused to act directly against the Barbary pirates for years. Eventually, between 10 and 20 percent of U.S. revenues would be paid annually without ever buying actual safety for Americans. In the end, Thomas Jefferson acted on his own, sending forces into harm’s way. America entered into its first and protracted foreign war. From beginning to end, in fact, the conflict lasted approximately 14 years. I couldn’t tell you, by the way, if the Barbary wars were ever described as a “quagmire” or "lost."

I won’t describe here the taking of Tripoli by courageous American soldiers. And I sure don’t have time to talk about America's eventual victory over the forces of that era's religiously justified terrorism. I would though encourage you to read about it for yourself. It's a great story and it holds an important lesson about the nature of the world.

Sometimes folks around the world mock Americans for not having more of a sense of history. They might be right, but I think it is often for a good reason. Americans are a people who look to the future instead of the past. We hope and believe that things can and will get better. We are more than willing to forgive our old enemies and move forward together in peace. So we tend to forget the bad things we left behind.

Unfortunately, some of our enemies feel differently. They neither forgive nor forget. Listening to the messages of al Qaida's leaders, you understand that they see their old defeats in very personal and contemporary terms. They are in a “long war” against us, even if we don’t know it. And they’re committed to winning it.