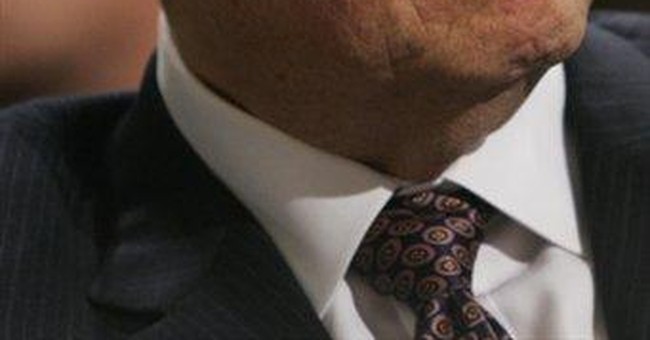 So we meet again, and I'm honored, because I know we're here for the same reasons: Love of our country and concern for our future.

A lot of Americans have these concerns tonight. They are concerned about the way things are going in our country right now. Some fear we may be in the first stages of decline. We've heard this malaise talk before.

Of course Iraq is a large part of it. Not only is it tough going, but the effort is besieged on all sides. From those playing the most crass kind of politics with it at home to criticism from around the world.

Even at home, as we enjoy the benefits from one of the best economies we've ever had, people seem uncertain; they raise concerns about global competition or a growing economic disparity among our citizens.

These are challenges. But how we react to them is more important than the challenges themselves. Some want us, to the extent possible, to withdraw from the world that presents us with so many problems, in the hope they will go away. Some would push us towards protectionist trade policies. Others see a solution in raising taxes and redistributing the income among our citizens.

Wrong on all counts. These are defensive, defeatist policies that have consistently been proven wrong. They are not what America is all about.

Let's talk about the issues here at home, first. A lot of folks in Washington suffer from a big misconception about our economy. They confuse the well-being of our government with the wealth of our nation. Adam Smith pointed out the same problem in his day, when many governments mixed up how much money the king had with how well-off the country was.

Taxes are necessary. But they don't make the country any better off. At best they simply move money from the private sector to the government. But taxes are also a burden on production, because they discourage people from working, saving, investing, and taking risks. Some economists have calculated that today each additional dollar collected by the government, by raising income-tax rates, makes the private sector as much as two dollars worse off.

To me this means one simple thing: tax rates should be as low as possible. This isn't anything ideological, and it really isn't some great insight. It's common sense arithmetic.

That's why the economy booms when taxes are cut. When the Kennedy tax cuts were passed in the 1960s, the economy boomed. When Reagan cut taxes in 1981, we went from economic malaise to a new morning in America. And when George Bush cut taxes in 2001, he took a declining economy he inherited to an economic expansion -- despite 9-11, the NASDAQ bubble and corporate scandals.

The Democrats, of course, want to raise taxes. They only want to target the rich, they say. A word of advice to anyone in the middle class -- don't stand anywhere near that target. Wouldn't it be great if, instead of worrying so much about how to divide the pie, we could work together on how to make the pie bigger?

On globalization -- we're not afraid of it. It works to our benefit. We innovate more and invest in that innovation better than anywhere else in the world. Same thing goes for services, which are increasingly driving our economy. Free trade and market economies have done more for freedom and prosperity than a central planner could ever dream and we're the world's best example of that. So, why do we want to take investment dollars out of growth, and invest it in government?

I'd say cash flow to the government is already going quite well. Over the past year our current tax structure generated record levels of revenue for Washington. In fact it's time to seriously consider what we're getting for our "investment" in government.

For many years, several functions of the federal government have been descending into a sorry state of mismanagement and lack of accountability. I published a 68-page report on government's waste, duplication and inability to carry out some of its basic responsibilities. That was back in 2001 before 9-11, and it got little attention. Now the government's shortcomings are affecting our national security and are getting a lot of attention.

The growth of government is not solving these problems; it's causing a lot of them. Every level of new bureaucracy that is created develops a level of bureaucracy beneath it, which creates another one. Pretty soon there is no accountability in the system. A new head of a department or agency comes in from out of town and, after a protracted confirmation fight, wants to spend his or her few years in Washington making great policy and solving national problems, not fighting with their own bureaucrats. So they just let well enough alone. Then you start seeing the results. Departments that can't pass an audit, computer systems that don't work, intelligence breakdowns, people in over their heads.

Yet people in both parties continue to try to federalize and regulate at the national level more and more aspects of American society -- things that have traditionally been handled at the state and local level. We must remember that we have states to serve as policy laboratories for innovation and competition. That's how we got welfare reform. Our system also allows for the diversity of our large country. Our attitude should be, let the federal government do what it is supposed to be doing -- competently. Then maybe we will give it something else to do.

The government could start by securing our nation's borders. A sovereign nation that can't do that is not a sovereign nation. This is secondarily an immigration issue. It's primarily a national security issue. We were told twenty years ago if we produced a comprehensive solution, we'd solve the illegal immigration problem. Twelve million illegals later, we're being told that same thing again. I don't believe most Americans are as concerned about the 12 million that are here as they are about the next 12 million and the next 12 million after that. I think they're thinking: "Prove you can secure the border and then people of good will can sit down and work out the rest of it, while protecting those folks who play by the rules."

Speaking of reforms and our economy, there is nothing more urgent than the fate that is awaiting our Social Security and Medicare programs. The good news is that we are living longer. However, we don't have enough young working people to finance these programs from their taxes.

People say the programs are going bankrupt. They won't go bankrupt. Even as these programs sap every dime of the government's revenue, the folks in Washington will raise the taxes necessary to cover the problem. At this rate the federal government is going to wind up as nothing more than a transfer agent -- transferring wealth from one generation to another. It will devastate our economy.

Sometimes I think that I'm the last guy around who still thinks term limits is a good idea. The professionalization of politics saps people's courage. Their desire to keep their job and not upset anybody overrides all else -- even if it hurts the country.

So the entitlement problem gets kicked a little further down the road. This action is based on the premise that our generation is too greedy to help the next generation. I believe just the opposite is true. If grandmom and granddad think that a little sacrifice will help their grandchildren when they get married, try to buy a home or have children, they will respond to a credible call to make that sacrifice -- if they don't think that the sacrifice is going down some government black hole.

It's clear with close numbers in the House and the Senate we need bipartisanship to have any chance at real reform in any of these areas. And there are many responsible people who are willing to try to make it happen. But the level of bipartisanship needed for real progress can only be achieved when politicians perceive that the American people are demanding it. That's why leaders of reform and hopefully our next President, will have a mandate to go directly to the American people with truth and clarity.

These days in Washington, there's an awful lot of talk about the need for conversation -- that we should talk more to our nation's enemies; that we should speak "truth to power." However the speakers are usually turned in the wrong direction. Instead of talking to each other, leaders need to be speaking more to the American people.

The message would be simple: "My friends we have entered a new era. We are going to be tested in many ways, possibly under attack and for a long time. It's time to take stock and be honest with ourselves. We're going to have to do a lot of things better. Here's what we need to do and here's why. I know that, now that you're being called upon, you will do whatever is necessary for the sake of our country and for future generations. You always have."

When the American people respond to that, as I know they will, you will have your bipartisanship.