The myth of Cuban health care 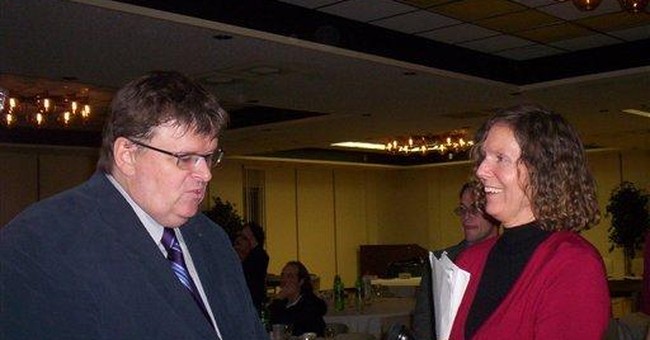 You might have read the stories about filmmaker Michael Moore taking ailing workers from Ground Zero in Manhattan to Cuba for free medical treatments. According to reports, he filmed the trip for a new movie that bashes America for not having government-provided health care.

Now, I have no expectation that Moore is going to tell the truth about Cuba or health care. I defend his right to do what he does, but Moore's talent for clever falsehoods has been too well documented. Simply calling his movies documentaries rather than works of fiction, I think, may be the biggest fiction of all.

While this PR stunt has obviously been successful -- here I am talking about it -- Moore's a piker compared to Fidel Castro and his regime. Moore just parrots the story they created -- one of the most successful public relations coups in history. This is the story of free, high quality Cuban health care.

The truth is that Cuban medical care has never recovered from Castro's takeover -- when the country’s health care ranked among the world's best. He won the support of the Cuban people by promising to replace Batista’s dictatorship with free elections, and to end corruption. Once in power, though, he made himself dictator and instituted Soviet-style Communism. Cubans not only failed to regain their democratic rights, their economy plunged into centrally planned poverty.

As many as half of Cuba's doctors fled almost immediately -- and defections continue to this day. Castro won't allow observers in to monitor his nation's true state, but defectors tell us that many Cubans live with permanent malnutrition and long waits for even basic medical services. Many treatments we take for granted aren't available at all -- except to the Communist elite or foreigners with dollars.

For them, Castro keeps "show" clinics equipped with the best medicines and technologies available. It was almost certainly one of these that Moore went to, if the stories in the NY Post and The Daily News are true.

Nothing about this story inspires doubt, though. Elements in Hollywood have been infatuated with the Cuban commander for years. It always leaves me shaking my head when I read about some big-time actor or director going to Cuba and gushing all over Castro. And, regular as rain, they bring up the health care myth when they come home.

What is it that leads people to value theoretically "free" health care, even when it's lousy or nonexistent, over a free society that actually delivers health care? You might have to deal with creditors after you go to the emergency ward in America, but no one is denied medical care here. I guarantee even the poorest Americans are getting far better medical services than many Cubans.

According to Forbes magazine, by the way, Castro is now personally worth approximately $900 million. So when he desperately needed medical treatment recently, he could afford to fly a Spanish surgeon, with equipment, on a chartered jet to Cuba. What does that say about free Cuban health care?

The other thing that irks me about Moore and his cohort in Hollywood is their complete lack of sympathy for fellow artists persecuted for opposing the Castro regime. Pro-democracy activists are routinely threatened and imprisoned, but Castro remains a hero to many here. According to human rights organizations, these prisoners of conscience are often beaten and denied medical treatment, sanitation or even adequate nutrition.

If Moore wants a subject for a real documentary, I would suggest looking into the life of Cuban painter and award-winning documentarian Nicolás Guillén Landrián. He was denied the right to practice his art for using the Beatles' song, "The Fool on the Hill," as background music behind footage of Castro climbing a mountain. Later, he was given plenty of free Cuban health care when he was confined for years in a "mental institution" and given devastating, repeated electroshock "treatments."

There are many other artists and activists who have enjoyed similar treatment. I suspect we'll see movies with sympathetic portrayals of terrorists held in Guantanamo before we ever hear about the torture of true Cuban heroes. Even Andy Garcia's brilliant fictionalized movie about the real Cuban experience, "The Lost City," was given the Hollywood silent treatment. My bet, though, is that we'll hear lots about how Michael Moore showed that Cuba's socialized medicine is better than ours.

So go ahead and start working on the Oscar speech, Michael.