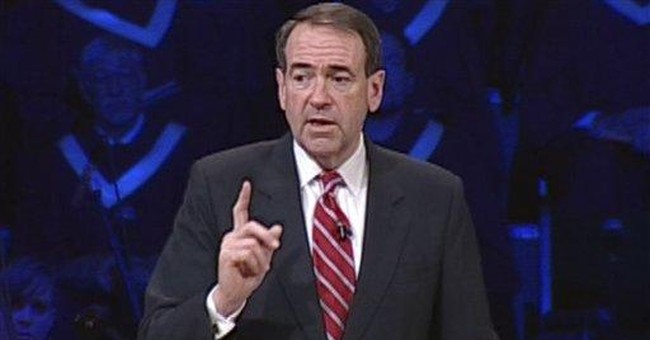 I can say, along with millions of Americans, that you’ve won our hearts. Now, close the deal and win our minds and thereby our votes by answering the main questions your critics have raised against you becoming our next president.

As I write this, you’re four points behind McCain nationally, three points behind him in Michigan, five points ahead of him in South Carolina and four points behind Rudy in Florida. You’ve got a real shot at winning this thing, and if you answer these questions successfully, I think you could end up becoming our next president—because I believe you can beat either Hillary or Obama.

1. You’re accused of advancing “liberal economic policies” because you raised taxes in Arkansas. If elected, what do you want to increase social spending on and why? Most conservatives don’t define “limited government” in terms of “no government.” We want government to help those who truly need it. We want to help the single mom down the street that’s struggling. Unlike Democrats, we don’t measure the success of social programs by how much we spend on them, but by whether the people we claim to be helping actually get helped.

We want “limited government” in opposition to “unlimited government.” We believe we’re already spending too much on too many programs, and we’d rather spend more wisely what we’re already spending than simply default to spending more. We don’t want “bigger government,” we want “smarter government.” We understand a “let’s cut spending” message can’t win a general election, but a “responsible spending” message can. How do you suggest we do this?

2. Your “Fair Tax” proposal is interesting, but you must know it has zero chance of getting through Congress in the coming decade, even if you should win reelection. We appreciate you raising the issue, and we’re all frustrated with the Tax Code, and we all hate the IRS. But, Congressional Democrats won’t ever let us eliminate an entire federal department like the IRS or the Department of Education. It will take decades to make a serious run at something like that. So, what are some more modest improvements you suggest for improving our existing tax system over the next four years?

3. You’re accused of opposing vouchers, yet you have the endorsement of the National Education Association for your work in Arkansas, and you have the overwhelming support of home schoolers. This is an odd mix. What is your position on school choice, vouchers, charter schools, etc.?

4. You’re accused of being weak on national security and your statement that we have “an arrogant foreign policy” is troubling. We need to hear more clearly why you think that is. Why do you want to close Guantanamo? Do you really want to give “enemy combatants” full access to our court system? This too, is troubling. In spite of this, it sounds like you “get” the global war against radical Islam. Please convince us you’ve got what it takes to go toe to toe with Osama, Ahmadinejad, Kim Jung-il, Putin, Chavez and China.

5. Your position on illegal immigration is confusing. On the one hand, you’ve got the strongest immigration platform of all the candidates and you want to pardon border agents Ramos and Compean as your first presidential act. We all love this. But, on the other hand, you gave children of illegals in-state tuition breaks in Arkansas. Please explain this apparent inconsistency.

6. You have said that you want a national ban on smoking. This offends even the vast majority of non-smoking conservatives because it violates the principle of federalism. How serious are you about this?

7. We understand the need to talk about the environment and global warming for electoral purposes. How serious are you about governmental involvement in this, too?

Finally, governor, we’re with you on the big issues of life, marriage, family and faith. We know that these moral issues are essential for holding the conservative coalition together. Yet less than half of all Christians in this country are even registered to vote. In order to motivate the traditional values community to get our friends and family registered and voting for you, please tell them the truth: Putting Hillary or Obama in the White House will mean a generation of pro-abortion justices on the Supreme Court, the likelihood of same-sex marriage in every state, pro-gay curriculum in every public school, and a decisive victory for ACLU-fueled militant secularism against the last remnants of our once Judeo-Christian culture.

Like I said, you’ve won our hearts. Now, answer these questions and win our minds, and thereby our votes and the election.