Carbon Offsets: Eco-Extortion, Green Guilt, and the Selling of Indulgences 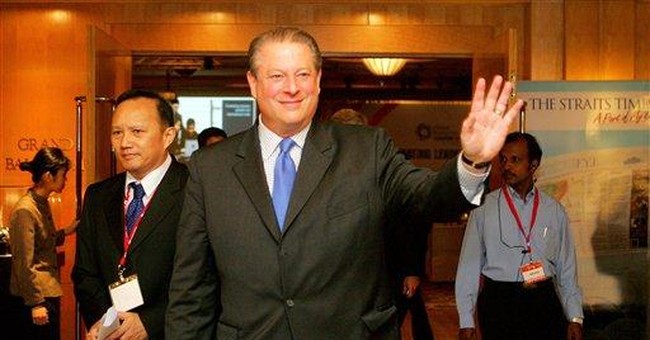 There are some things you just gotta do yourself. Someone else can’t lose your weight, quit your addiction, parent your kids, or confess your sins.

You have to do it.

Neither God nor science works that way.

Yet, the selling of “voluntary carbon offsets”—eco-indulgences—is a $55 million per year industry, involving over three dozen companies worldwide. Total sales are anticipated to double both this year and next, and entrepreneurs are clamoring all over themselves for a piece of the action.

And it’s all a scam.

Yes, the money is very real, but the alleged benefits to the environment are fake.

Paying someone to plant a tree to “offset” the carbon footprint of your SUV is just plain silly. Yet there are thousands of people spending real money on these kind of indulgences every day. Why?

The answer is that it’s part green guilt, part eco-extortion, and part just plain novelty—like those pet rocks, mood rings, and Magic 8 Balls from the ’70s. People want to brag to their friends about how eco-sensitive they are. Which, of course, is part of the whole green guilt, eco-extortion thing.

The dictionary defines extortion as “the practice of obtaining something, especially money, through force or threats.”

What is the “force” used to pressure people into wasting their money on carbon offsets?

It’s called “green guilt,” and it’s the peer pressure generated by people like Algore and The Live Earth Hystericals (see here) to “Do something!” about the “threat” of catastrophic, man-made global warming.

Of course, he and his green buddies aren’t going to stop living their giant carbon footprint lifestyles, which is why they came up with the whole scam of selling you a voluntary carbon offset—which is simply a self-imposed, guilt-motivated pollution tax.

So, you give them your money, and they tell you it’s okay to feel good about yourself because you’re “Doing something!” about global warming. It’s almost like a bad late-night infomercial slogan: “Got green guilt? Wanna do something to fight global warming? Can’t attend one of our Live Earth concerts? Buy an offset!”

See, in the liberal mind, it’s better to “care” about a problem than it is to actually solve it. Whether it’s poverty, racism, substance abuse, teen pregnancy, illegal immigration, public education, the threat from radical Islam or nearly any other problem we face, liberals would rather make the effort to convince you how much they can empathize and “feel your pain,” than they would to actually do the hard work of implementing policies to fix the problems or reduce the threats.

Last week, in a great article in the Los Angeles Times entitled “Can You Buy a Greener Conscience?,” author Alan Zarembo exposed how the whole voluntary carbon offset scam works by profiling one of the leading companies in the offset business, Native Energy. It’s an exposé on the need for governmental regulation of the budding industry.

Basically, Native Energy is a middleman that buys offsets from places like wind farms and methane farms, for say $2.00 to $4.00 a ton, and then they turn around and sell those offsets to the public at “market price,” which is usually between $9.00 to $15.00 a ton. So far, so good.

The problem is, Native Energy is only buying a small portion of these alternative energy suppliers but they’re declaring a benefit as though they bought the whole thing. They buy a 1 percent piece of the action but claim 100 percent of the benefit.

That’s like buying 1 percent of a race horse and keeping 100 percent of the winnings. Not good.

Furthermore, Native Energy is buying little pieces of companies that are already designed and financed, then acting as though their investment was critical to the whole operation.

The offsets they sell aren’t making, creating, or saving anything additional. That wind farm or methane plant was going to get built anyway—with or without the sale of their offsets. So, in reality, buying offsets from Native Energy does nothing to benefit the environment—just as buying indulgences do nothing to benefit your soul.

But, none of this is about reality, anyway. It’s all about caring, and compassion, and green guilt.

Take it from someone who knows.

Zarembo includes a quote from Davis Guggenheim, director of “An Inconvenient Truth,” who says this about the selling of voluntary carbon offsets: “It’s a powerful first step … The choice of doing this rather than nothing is not a choice … All of us knew when you’re doing offsets that the theoretical and symbolic quality to doing this is as important as the practical quality.”

The symbolic is as important as the practical? That’s liberalspeak at it’s finest.

We have to “Do something!”

Since their founding, Native Energy has sold about 1 million tons of CO2 offsets. At, say, an average of $10 a ton, that’s a lot of “something.”

So, the clearest thing that has been done through the sale of offsets is the rise of a very profitable, middleman industry capitalizing on guilt.

Too bad it’s not “doing something!” to actually reduce a single carbon footprint.