A Leftist Declaration of DE-pendence 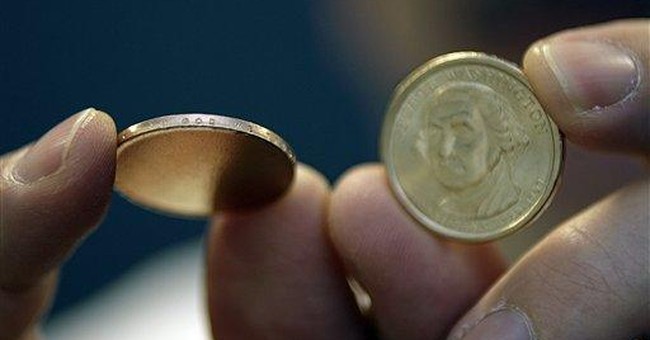 Despite a 45-year monopoly on public education, the Left has been unable to persuade most Americans to abandon their belief in God and creation and replace it with a belief in atheism and evolution.

According to the latest Newsweek poll, 9 out of 10 Americans still believe in God, and half still do not believe in evolution. Especially discouraging the Leftist Academy are the 34% of college graduates who still accept the Biblical account of creation. And, when you consider 90% of all K-12 students attend their public schools, it becomes even more evident that the Left’s program of public indoctrination is not yielding the anticipated results.

This attempt to bring about the death of Christian America in order to bring about the birth of a secular-socialist uto-pia has been resisted primarily because of the fundamental Judeo-Christian values buried deep within our hearts and our national soul, best expressed in the Declaration of Independence.

WE hold these Truths to be self-evident, that all Men are created equal, that they are endowed by their Creator with certain unalienable Rights, that among these are Life, Liberty and the pursuit of Happi-ness — That to secure these Rights, Governments are instituted among Men, deriving their just Powers from the Consent of the Governed, that whenever any Form of Government becomes destructive of these Ends, it is the Right of the People to alter or to abolish it, and to institute new Government, laying its Foundation on such Principles, and organizing its Powers in such Form, as to them shall seem most likely to effect their Safety and Happiness.

The Bible is the foundation, the Declaration is the “why,” and the Constitution is the “how” of this wonderful experi-ment in liberty and self-government known as the United States of America.

From the Bible, we learn man was created in the image of God, that each man is of equal moral value before God, and our equality prevents one man from claiming the divine right to rule over another. Because each man is equally re-sponsible before God, he is to be free, and each man is responsible for the use of that freedom in governing himself. The principle of self-government roots in our equality before God.

It took 18 centuries of Christian thought to produce the Declaration. Many things needed to be worked out, among them the separation of church and state, the divine right of kings, primogeniture, and a theory of natural law and natural right. Once these were established, the institution of slavery needed to be set on a course toward ultimate extinction, which the Founders accomplished in the drafting of the Declaration. We are still overcoming the residue of that deplor-able curse. Yet, the foundation had been laid in “all men are created equal.”

If no God, then no Creator, no natural rights, and no equality. If no Creator, then evolution. If evolution, then all rights are positive rights, expressions of power rather than authority. And, if evolution, then no equality since the differ-ent races evolved separately, and no human exceptionalism – man is but an animal. Meaning, if man were to consider himself on a higher moral plane than the brutes, he would be guilty of the highest form of racism: speciesism.

Ultimately, rights come from either God or Government. If rights come from God, then government is under God, since it is the role of government to secure those rights. But, if government is the source of rights, then what is granted can be withdrawn. Rights would be alienable, only temporary. Similarly, laws are either divine or positive. All positive laws are expressions of power, while all divine laws are claims of authority. The Founders understood these things better than anyone before or since – they are the greatest political philosophers in history.

Consider slavery. Lincoln argued slavery was immoral though legal. Douglas argued it was both moral and legal. Both men accepted the divine origin of rights. But, if rights were mere positive rights, as the Left contends, then that which is legal is that which is moral. This is why to the Left, nothing is higher than the law, not even morality. Which is why there could be no leftist moral argument against slavery, they would be limited to merely a legal appeal. If so, Dred Scott would still stand. It does not because we believe the Declaration, that the moral trumps the legal, that the legal at-tempts to codify the moral. Our Founders believed this. It is the American way.

Consider an Atheist’s Declaration of Dependence:

We claim these opinions to be our relative truth, that most men are to be considered equally evolved, that they are granted certain temporary rights by government, that among them are generally life, lib-erty, and the pursuit of happiness, that to create, define, and enforce these rights, governments are insti-tuted to rule over men, deriving their powers from the ruling elites, that whenever any form of govern-ment is threatened, it is never the right of the people to alter and abolish it, for they are to never insti-tute new government. For it is the power and authority of government to create and destroy all rights, and to always determine what is in the best interests of the people. For the people are forever depend-ent upon government for all things.

The Newsweek poll is good news. It is a high, noble and an especially American thing to do to reject secularism, atheism, evolution, and other ideologies of the Left – for such thinking could never have drafted the Declaration of Inde-pendence.