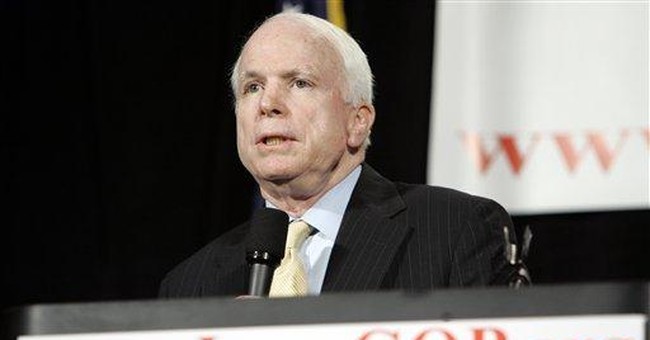 As we approach Election Day 2008, the uncertainty of our world necessitates that we elect a person with John McCain’s consistent conservative record. We face difficult choices about Iraq and the War on Terror that have profound implications on our long term security, the consequences of mismanaged federal spending are imminent, and the Supreme Court will likely have important vacancies.

Republican voters put a great deal of emphasis on a candidate’s conservative record and the credibility of their nominee, which is why I believe John McCain will be our next president.

It is fortunate for all of us, because we need John McCain’s brand of leadership now more than ever.

Senator McCain has taken the principled position on the war against those that intend to do us harm. He has made global security a centerpiece of his vision for the future, not because it is politically expedient, but because it’s necessary.

John McCain has consistently said he would “rather lose a campaign than a war.” There is no question John McCain’s resume makes him the most qualified conservative choice on defense issues, and his principles make him the most compelling.

As the fiscal irresponsibility in Washington has spread, the need for a true fiscal conservative has grown. Senator McCain, who earned a 91% rating from Citizens Against Government Waste, has spent his entire career battling out-of-control spending. He fought the problem head on by introducing The Pork-Barrel Reduction Act, focusing on government transparency and restraint. He has backed the Legislative Line Item Veto Act to provide the President with an important tool to block wasteful spending.

The Economist summed it up well, “[McCain] is a budget hawk who has done more than any other senator to crusade against ‘earmarks,’ pork-barrel spending and the lobbying industry…”

His pro-family voting record earned him a 0% rating from NARAL Pro-Choice America and Planned Parenthood. He has always had a strong pro-life voting record and voted to confirm Justices Alito, Roberts, Thomas, and Scalia.

On the issue of protecting traditional marriage, John McCain voted for the Defense of Marriage Act and actively campaigned for the Arizona constitutional amendment defining marriage as between one man and one woman. He supports an amendment to the U.S. Constitution if activist judges attempt to usurp the right of states to protect marriage.