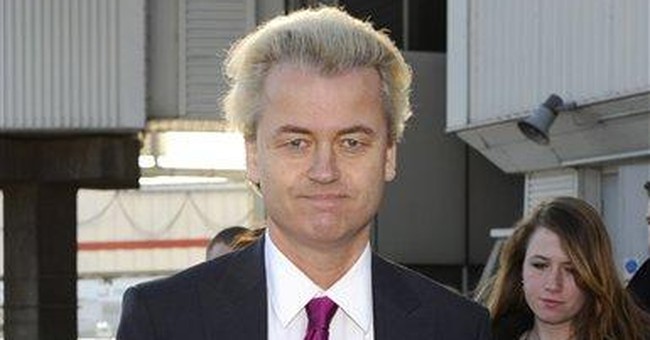 At a time when President Obama insists that the most pressing threat facing America is the growing cost of health care, a recent speech in Britain's House of Lords by Dutch parliamentarian Geert Wilders is a salutary reminder of what is really endangering us all: The rising tide of Islamic supremacism codified by authoritative Islam in the brutally repressive law of Shariah - the law of Saudi Arabia and Iran among other Islamic states.

For pointing out that danger and striving in his native Netherlands to counteract it, Mr. Wilders is being reviled and slandered. Condemnation from the Islamists is to be expected. Ditto the attacks from their friends on the political Left. Unfortunately, he has also recently been sharply criticized by several prominent and influential American conservatives. On Fox News last week, Glenn Beck called him "a fascist," Bill Kristol said he was "a demagogue" and Charles Krauthammer described him as "extreme, radical and wrong."

In fact, at great personal cost and with extraordinary courage, Geert Wilders has been trying to save his country from the true fascists of our time, those whose demagoguery is unmistakable and whose extremism is all too real: Shariah-adherent Muslims in the Netherlands, in Europe more generally and in the wider world - including, increasingly here in the United States.

Now, I have had my disagreements with Mr. Wilders - primarily about the way he sometimes characterizes the problem posed by Shariah. But let there be no doubt: He is committed to protecting freedom and Western civilization in an era when too many are choosing the easier course of ignoring the gathering threat being posed to them by Shariah-inspired, fascistic Islamic supremacism.

Geert Wilders does so in the tradition of others who valiantly fought earlier efforts to impose intolerant and repressive ideologies on free societies. Indeed, in his appearance before Britain's House of Lords on March 5th, he invoked: Ronald Reagan who famously declared, "We need to act today, to preserve tomorrow"; George Orwell's "If liberty means anything at all, it means the right to tell people what they do not want to hear"; and Winston Churchill's comparison of the Koran to Mein Kampf and "Winnie's" century-old admonitions about the threat "Mohammedanism" poses to Western civilization.

[In his address in London at the invitation of Baroness Caroline Cox and Lord Malcolm Pearson - two of Parliament's greatest contemporary champions of freedom, Mr. Wilder noted caustically that he is on trial in the Netherlands today for making the same comparison as Churchill did in his Nobel Prize-winning history of the Second World War. He then asked rhetorically, "I wonder if Britain will ever put the beliefs of Winston Churchill on trial?"]

Perhaps Geert Wilders' most trenchant warning concerns the alarming political nexus between the Left and the Islamists - what some have called the "Red-Green axis." He told the House of Lords: "The Left is facilitating Islamization. Leftists, liberals, are cheering for every new Shariah bank being created, for every new Shariah mortgage, for every new Islamic school, for every new Shariah court. Leftists consider Islam as being equal to our own culture. Shariah law or democracy? Islam or freedom? It doesn't really matter to them. But it does matter to us. The entire leftist elite is guilty of practicing cultural relativism. Universities, churches, trade unions, the media, politicians. They are all betraying our hard-won liberties."

In the face of these perils, Geert Wilders offers policies that infuriate the adherents to Shariah and their allies on the political Left - and that strike as "extreme" some who have yet to confront the danger this axis poses to the Free World and Western civilization. He calls for Europe to adopt something akin to the U.S. Constitution's First Amendment - hardly the stuff of fascism. He proudly and correctly declares the West's tolerant, freedom-rooted culture as superior to that of totalitarian Shariah Islam.

Mr. Wilders also seeks an end to mass immigration from Islamic countries, expulsion of criminal immigrants and a halt to further construction of mosques. Clearly, in some quarters, these are seen as controversial proposals. But they reflect a harsh demographic reality: Failure to take such steps will inevitably condemn free societies like the Netherlands to submission at the hands of swelling numbers of Shariah-adherent Muslims.

Geert Wilders' courage in standing up to the Red-Green axis and its shared agenda of destroying Western civilization has made him the man of the hour in his country. Even as he is being prosecuted by his government for exercising free speech, his commitment to protecting it and other liberties has made his Freedom Party the most popular in parts of the Netherlands - and given him a good shot at becoming the next Dutch prime minister in elections to be held there in June.

All of us who hate fascism need to recognize the real source of that threat in Europe and elsewhere today. It arises from Shariah's adherents, not those like Geert Wilders who thankfully are standing up to that totalitarian ideology in the tradition of great democratic anti-fascists like Reagan, Orwell and Churchill. As such, Mr. Wilders deserves our thanks and support, not denunciations from fellow freedom-fighters that unintentionally provides political cover for our common enemies' efforts to discredit and, if possible, to kill him.