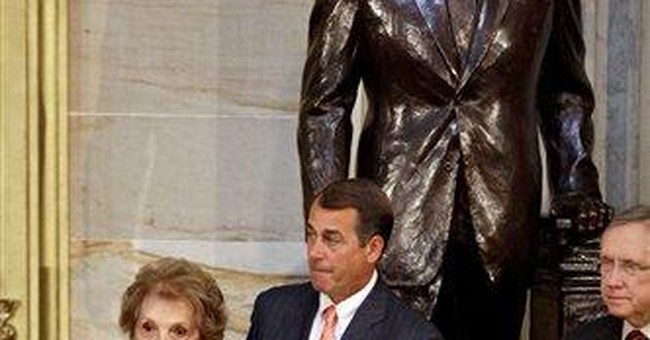 Ronald Reagan the actor once famously screamed on screen "Where's the rest of me?!" after waking in a hospital to discover that a sadistic surgeon had amputated both of his legs. My guess is that Ronald Reagan the national leader would express similar horror at what is happening to his beloved conservative movement as some in its ranks seek to sever from its agenda the priority "the Gipper" consistently gave to the national security.

One need look no further than the various functions held in the Washington area last week to see why Mr. Reagan would be so alarmed. On Wednesday, I joined a group of prominent conservatives assembled for the purpose of unveiling a document dubbed "the Mount Vernon Statement." It was intended to emulate an earlier articulation of the principles that unite the Right, issued fifty years ago at the Sharon, Connecticut home of William F. Buckley, Jr.

It was noteworthy that, during the press event where the new statement was released, Colin Hanna of the remarkable organization Let Freedom Ring read passages from the previous one. The latter spoke of "eternal truths" to be affirmed, including: "That we will be free only so long as the national sovereignty of the United States is secure; that history shows periods of freedom are rare, and can exist only when free citizens concertedly defend their rights against all enemies; that the forces of international Communism are, at present, the greatest single threat to these liberties; that the United States should stress victory over, rather than co-existance with, this menace; and that American foreign policy must be judged by this criterion: Does it serve the just interests of the United States?"

By contrast, the Mt. Vernon document made no mention at all of today's totalitarian ideology - what authoritative Islam calls Shariah - or the threat it poses to America, let alone declare that victory should be our purpose in dealing with this menace. To be sure, there were passing references to the Founders' "secur[ing] national independence," "warnings to tyrants and despots everywhere" and the proposition that "energetic but responsible government is the key to America's safety and leadership role in the world." Thin gruel by comparison with Sharon's statement, and woefully short of the sort of express commitment to "peace through strength" Mr. Reagan exemplified and practiced.

Still, the Mount Vernon Statement is a paragon of robust national security- mindedness in contrast to what took place in the succeeding three days at the annual Conservative Political Action Conference (CPAC). With a few notable exceptions - including powerful addresses by former UN Ambassador John Bolton and former Senator Rick Santorum - the program was bereft of the focus one would think 10,000 people who cherish the memory of Ronald Reagan would have demanded, especially in the midst of a global war with two active combat fronts.

Incredibly, there was but one panel held in the plenary hall that had as its principal subject the question of national defense. Entitled "What is a Conservative Foreign Policy?," it featured remarks by: a junior (but promising) Member of Congress, Rep. Jason Chaffetz of Utah; an old Reaganaut, Don Devine, who urged America to emulate President Reagan's abandoning of Lebanon and the use of force only in tiny Grenada; and Joanne Herring, the colorful Texas patriot/philanthropist best known for her persona played by Julia Roberts in "Charlie Wilson's War."

With all due respect to the participants, it is inconceivable that CPAC's organizers could not have arranged a more formidable program to address this and related topics. We are entitled to know why they did not do so. Watch this space for the answer.

Whatever the reason, the intended take-away from most of the other major speakers-- including Glenn Beck, who closed the conference with an extraordinary, hour-plus-long "pox on both your houses" call-to-action that never once mentioned national security-- and the featured panels was unmistakable: It's the economy, stupid. Or at least, it's the deficit, or excessive government spending or just excessive government.

As a result, it came as little surprise to this attendee that libertarian Rep. Ron Paul won 31% of the vote in the CPAC straw poll. In the absence of the sort of serious attention to national security that was emblematic of the conservatism of Bill Buckley and Ronald Reagan, why shouldn't those present feel free blithely to endorse a man who is committed to small, cheap government even if his positions on foreign and defense policy are so extreme and so critical of America as to make Barack Obama's look responsible, if not hardline.

And there's the rub. Even if a robust security policy platform were not, on the merits, the right stance for the Right, it has proven repeatedly to be the winning-est stance politically, especially in times when our countrymen properly feel insecure. Sen. Scott Brown of Massachusetts was wildly acclaimed by the CPAC masses, yet he would be the first to acknowledge that some 64% of his voters supported him because of his rejection of Obama's fecklessness on terrorism.

In time of war, the American people deserve at least one party/movement/team that is unabashedly Reaganesque in its commitment to the national security of the United States. If conservatives and Republicans fail to articulate and demonstrate such a commitment, it is a safe bet that - even in an election season seemingly so promising - they will wake up on November 3rd screaming, "Where's the rest of me?"