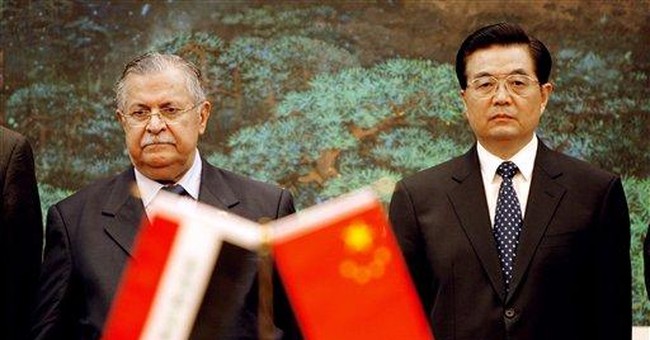 Communist China has done it again. Desperate for new sources of energy, the Chinese are moving into an oil-rich nation eschewed by others. In this case, however, the country in question is not a state-sponsor of terror or other pariah state. Rather, it is Iraq, a country the United States has gone to great lengths to make a member in good standing of the Free World – free, among other things, of the influence of those like PRC who had close ties to Saddam Hussein.

Yet now, according to the Financial Times, the Iraqi government last Friday “revived a contract signed by the Saddam Hussein administration allowing a state-owned Chinese oil company to develop an Iraqi oil field.” The deal to develop the al-Ahdab field in Iraq was signed with China National Petroleum Corporation (CNPC) in 1997 and was valued at the time to be worth $1.2 billion. What is more, the FT reported that Iraqi Oil Minister Hussein al-Shahristani announced that “Baghdad welcomed Chinese oil company bids for any other contract in the country through a ‘fair and transparent bidding process’ to be laid out in the new oil law under discussion in Iraq’s parliament.”

Part of the impetus behind the free Iraqi government embracing CNPC – the PRC’s largest state-owned oil company and an instrument for its partnerships with the world’s most odious regimes – is a harsh reality: China is one of all too few investors who appreciate the strategic opportunities inherent in securing a foothold in Iraq today and are able to accept and mitigate the risks associated with doing business there.

Another consideration, however, has to do with the matter of Iraqi sovereign debt to Communist China dating from Saddam Hussein’s time and estimated to be worth as much as $10 billion. The PRC has insisted that the successor government in Baghdad is responsible for its predecessor’s liabilities. The Financial Times noted Friday that a seeming breakthrough occurred during a visit to China last month by Iraq’s president, Jalal Talabani. Beijing announced that “a ‘large margin’ of Iraqi debt would be canceled, although no specific figures were released.” As the Communists are fond of observing, this is hardly a coincidence, comrade. China used the leverage of a promise to forgive what is, as a practical matter, uncollectable Iraqi debt to secure renewed access to Iraqi oil.

There is a special irony to China’s adamance on the subject that successor governments are responsible for their predecessors’ sovereign debts. After all, American and other investors are estimated to be holding Chinese sovereign bonds issued by pre-Communist regimes worth roughly $260 billion – bonds the PRC has, to date, refused to honor. While British holders of such Chinese bonds were given a discriminatory settlement back in 1987, their American counterparts have been left holding the bag.

Now, though, U.S. legislators are considering a resolution that could induce China to be more forthcoming. House Concurrent Resolution 160, introduced last month by Rep. Lincoln Davis, Democrat of Tennessee and others on both sides of the aisle, would deny the PRC access to the U.S. capital markets until such time as, among other things, Communist China “fully honors repayment of its outstanding defaulted public debts owed to United States citizens.”

Such a penalty for China’s effective default would be a first. Until now, there have been no material costs to China for reneging on these debts. Its bond ratings were not affected. Neither has there been any impediment to the PRC’s ability to bring to American and other international exchanges various “bad actors” – often state-owned companies, like CNPC, Petrochina and Sinopec, engaged in activities inimical to vital U.S. security, economic and/or human rights interests.

In the absence of any serious, let alone sustained, effort by the Executive Branch and the Congress to resolve this corrosive bilateral problem, is it any wonder that there has been no satisfactory resolution to other financial abuses by China? These include: Beijing’s manipulation of its currency; its underwriting of the genocidal regime in Sudan; and China’s worrisome financial (and other) ties with Iran, Hugo Chavez’s Venezuela and North Korea, etc.

The adoption by both houses of Congress of legislation like H. Con. Res. 160 should be but the first of several steps taken to induce the PRC to clean up its sovereign debt. For example, as legislative and other measures are developed to counter China’s currency manipulation, provisions should be included requiring Beijing to make good on its defaulted sovereign bonds.

The Securities and Exchange Commission and other credit-rating agencies should be required to take into account China’s defaulted bonds in their ratings and disclosure requirements. And targeted financial sanctions against the PRC should be promulgated in the event China continues to ignore its long-standing financial commitments.

Last, but not least, American and other vendors should be encouraged to settle accounts with China by using the legal tender of Chinese sovereign bonds. In this fashion, Beijing can be held accountable for its debts, with minimal impact on trade and other relations.

If China can use sovereign debt owed it – even debt incurred by previous governments as despicable as that of Saddam Hussein – to euchre freedom-aspiring Iraqis into making strategically momentous concessions, the least the United States can do is ensure that the Communist Chinese are held to no lesser standard. Sauce for the goose, after all, must be sauce for the Beijing duck.

Here's the New Office Trump Will Hold
Townhall
Washington Free Beacon looks into the researcher who helped with Salon's 'saddest hit piece ever' on Sen. Tom Cotton
Twitchy
Trump Makes New Move That's the Ultimate Troll, and Liberals Are Already Melting Down
Redstate
Tulsi Gabbard on Dems' Terror Law: ‘We Don’t Have to Guess About Where This Goes or How This Ends'
PJ Media