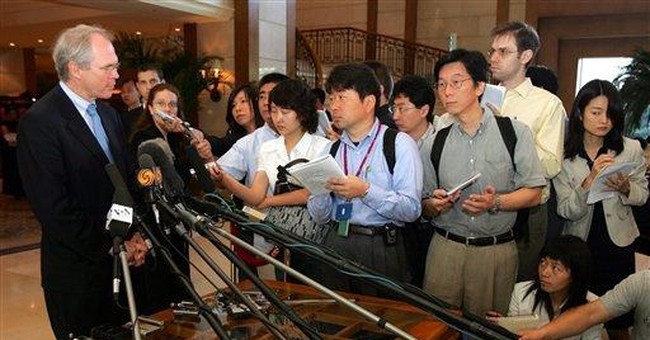 Back when nuclear weaponry and deterrence strategy still received serious national deliberation, most sensible people recognized a basic reality: Once the technology to build nuclear weapons became widely available, there was no way to stuff “the nuclear genie back in the bottle.”

In those days, only the most pollyannish and irresponsible – typically, arms control enthusiasts, Soviet dupes and one-worlders – nurtured illusions that nuclear proliferation could be wholly prevented. Toward that end, such “Genie-stuffers” generally promoted the negotiation of unverifiable treaties and unilateral U.S. restraint, if not actual disarmament.

Unfortunately, a domestic political squeeze-play (involving funding for the long-since-terminated Super Collider-Super Conductor then under construction in Texas) prompted the first President Bush to embrace such an exercise in American nuclear restraint: a U.S. moratorium on all underground nuclear testing.

Fifteen years have now elapsed since the United States last conducted an underground U.S. nuclear test. The unilateral moratorium ushered in a period in which little responsible thought, let alone rigorous debate, has been applied to America’s deterrent and what it will take to assure its future reliability and safety.

This is all the more astounding since, during this period, uncertainty has steadily grown about the actual condition of the U.S. nuclear arsenal. As the Washington Post reported back in January 2002, “The Energy Department’s inspector general has determined that the growing problems associated with the safety and reliability of the nation’s nuclear weapons, without nuclear testing, have become a ‘most serious challenge area’ for the [agency] that runs the weapons complex.”

It has, nonetheless, been nine years since questions about what it will take to ensure that this country has – and continues to retain – a credible nuclear arsenal were addressed in a way remotely commensurate with the importance of the issue. The occasion was a momentous debate in the U.S. Senate concerning ratification of one of the Genie-stuffers’ favorite hobby horses: a treaty permanently (albeit unverifiably) banning all underground nuclear tests.

This accord, known as the Comprehensive Test Ban Treaty (CTBT), is such a priority for the anti-nuclear crowd for a simple reason. Without periodic, realistic testing, it is not scientifically possible to assure with high confidence that existing nuclear weapons are as safe and reliable as we know how to make them. Even more risky would be the replacement of such aging weapons with new, modern and appropriate designs – absent the rigors of underground tests. Claims to the contrary are leaps of faith and defy historical experience.

When the Senate considered the CTBT in 1999, it took testimony establishing that, thanks to differing technological approaches and the considerable opportunities for cheating, the treaty would not have comparable effects on other nations. In addition, experts warned that other nuclear weapon states would continue modernizing their arsenals and proliferation among wanna-be nations would go on apace. These predictions have been validated by the passage of time.

Fortunately, when an informed, thorough debate on the CTBT was conducted by the Senate, fully half of the “world’s greatest deliberative body” refused to consent to the treaty’s ratification. No arms control agreement in history had been so thoroughly – and so properly – repudiated.

Now, however, Sen. Carl Levin – hands-down the most radical anti-defense legislator ever to chair the Senate Armed Services Committee – has decided to try to resuscitate the defective and rejected CTBT. Not content with undermining the U.S. position in Iraq and purging the chairman of the Joint Chiefs of Staff, Gen. Peter Pace, Chairman Levin is seeking to engineer a stealthy, back-door reversal of the Senate’s historic position on the Comprehensive Test Ban Treaty.

Sen. Levin’s vehicle is the annual defense authorization legislation, which is expected to be considered by the full Senate after the 4th of July recess. He has attached to the bill a “sense of Congress” resolution expressing support for the CTBT and calling for its ratification. Were the full Senate to approve the bill in its present form, the Genie-stuffers would be able to claim that the previous rejection has been supplanted by an endorsement, clearing the way for a hasty reconsideration of the accord.

Unfortunately, political cover has recently been afforded to the Genie-stuffers by several elder statesmen who should know better than support the CTBT as a means of ridding the world of nuclear weapons: former Secretaries of State Henry Kissinger and George Shultz. Citing Ronald Reagan’s idealistic vision of a world without nuclear arms – one he had the good sense not to pursue as an immediate objective or through a nuclear test ban, Messrs. Kissinger and Shultz have joined forces with former Clinton Defense Secretary William Perry and Sen. Levin’s predecessor as Senate Armed Services Committee chairman, Sam Nunn (now working for the Nuclear Threat Institute, a creature of the inveterate U.S.-disarmer Ted Turner).

These geezer Genie-stuffers have been joined by former Soviet President Mikhail Gorbachev. His endorsement of denuclearization is a throwback to the USSR’s historic efforts to disarm the United States. Its utter insubstantiality is underscored by Gorbachev’s successor, Vladimir Putin, and the current Russian capo’s aggressive nuclear modernization program and threats of devastating attacks on Europe.

There are many still serving in the Senate who opposed the CTBT eight years ago – including the entire Republican leadership and ranking members of the Armed Services, Foreign Relations, Intelligence, Energy and Appropriations Committees. There are, however, thirty-six Senators who have been elected since that time who have not benefited from any hearings, let alone real debate, about this treaty. It is a disservice to them and to the American people they represent to try by stealth to enlist them in the Genie-stuffers’ irresponsible agenda.