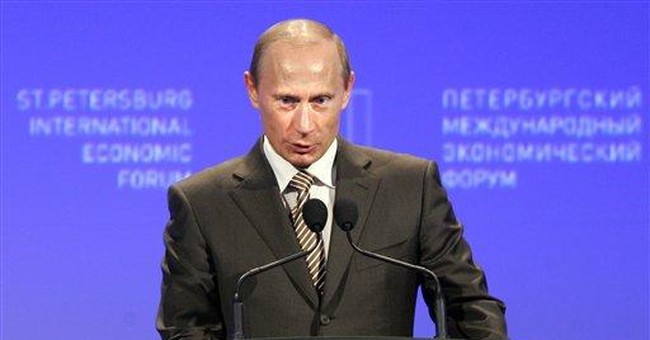 Chess is the national sport of Russia. It is, therefore, as Soviet Communists like Vladimir Putin used to say, “no coincidence, comrade” that the proposal on missile defense that he rolled out at last week’s G-8 meeting was a sophisticated gambit, a crafty effort not to advance the protection of Europe and the United States from future Iranian missiles, but to block such anti-missile defenses. Call it Putin’s ploy.

In fact, in the manner of an accomplished master of the game – for example, his democracy-advocating nemesis, Garry Kasparov – Putin is playing on several different chess boards simultaneously.

First, there is the U.S.-Russian relationship. An enemy is required by every would-be totalitarian – and it is increasingly clear that, despite his laughable claim to being “the last democrat,” Putin’s behavior has the hallmarks of a new czar. For Vladimir Putin, it is us. By building up the notion that we are a threat, he is able to garner popular support for his growing consolidation of power and even repression at home. He is also able to justify a new military build-up and adventurism abroad in league with the likes of world-class anti-Americans like Iran’s mullahs, China’s Communist leadership, Venezuela’s Hugo Chavez and Kim Jong Il of North Korea.

Then, there is the Russian-European “board.” Putin has reverted to traditional Kremlin behavior towards Europe: bullying, coercing and blackmailing, using threats of nuclear attacks and energy cut-offs and other forms of economic pressure Taking a move out of Stalin’s playbook, the man-who-would-be-Czar has even attacked one of the Baltic states, Estonia, albeit with cyber-warfare, not the old fashioned kind.

Finally, Vladimir Putin is trying to affect U.S.-European relations. His service in the KGB during the American-led effort to place intermediate-range nuclear missiles in Europe nearly a quarter century ago clearly left its mark on Putin. He is not only nostalgic for the Soviets’ superpower status that began to unravel when that deployment went forward. He is also well-versed in the type of divide-and-conquer strategy that narrowly failed to topple key NATO governments and prevent the INF missiles from being fielded.

Today, the Kremlin is hoping to capitalize on U.S.-European strains over Iraq and to use the wedge of opposition to Bush Administration plans to deploy a very modest anti-missile capability in Poland and the Czech Republic to create, and fill, a vacuum of power on the continent.

The Putin ploy seeks to advance these purposes in several ways:

The Russian president has offered a Russian radar in Azerbaijan as an alternative to the detection and tracking radar slated under the Bush plan for the Czech Republic. Never mind that the Kremlin’s obsolescent radar is not designed for the kind of sophisticated discrimination of warheads from decoys inherent in the proposed, modern American system. The idea is not to do the job. Rather, it is to confuse the issue, give Czech opponents an apparent alternative to having the new radar based in their country, and make the U.S. appear unreasonable.

Similarly, Putin has proposed that instead of 10 anti-missile interceptors slated for deployment in Poland, the United States put interceptors in Turkey, Iraq and at sea on warships equipped with the Aegis defensive system. This gambit gives Polish critics an out, while affording a chance further to roil the United States’ relations with Turkey and Iraq.

The Kremlin has long sought to undermine the incalculably important strategic alliance between America and Turkey – already frayed at the moment by the anti-U.S. agenda of the Islamist government in Ankara and the growing tensions between the two countries over Iraq’s Kurdistan. And at a moment when the idea of “getting out of Iraq” is all the rage in American elite circles, committing to the long-term basing there of anti-missile systems is clearly not on.

The idea of making Aegis warships all they can be when it comes to anti-missile defenses is, of course, a great idea. That is not what Putin has in mind, however. And, unless a man who does – the new Chairman of the Joint Chiefs of Staff-designate, Adm. Mike Mullins –has his way, these missile defense ships will remain incapable of providing the sort of robust protection to Europe and the United States that they could, and that we need.

For good measure, Putin has thrown in two other problematic ideas: 1) There is no need to rush on European missile defenses, since he claims the Iranians have no missiles capable of reaching Europe, nor any plans to build them. And 2) Russia must be involved in the decision-making about any anti-missile deployments.

The first is patently untrue. Iran’s current Shahab-3 missile could reach parts of NATO territory. And there are unmistakable signs that the mullahs in Tehran intend to develop a Shahab-4 which will be able to attack much, if not all, of the European continent.

The most insidious aspect of Putin’s ploy is his insistence, through seduction or intimidation, that Russia be a party to any decisions about the deployment – and perhaps the employment – of missile defenses for Europe. This would be tantamount to allowing one of the Tehran regime’s most important allies and one of its nuclear enablers to determine whether and how our European partners and interests will be protected against the threat posed by Putin’s friends in Iran.

All this is expected to be discussed further in July when Vladimir Putin is honored with a trip to the Bush family compound in Maine. President Bush will be under greater pressure to surrender American freedom of action on missile defense there than any U.S. leader since Ronald Reagan, who was tempted to do so by Mikhail Gorbachev at Reykjavik two decades ago. Now, as then, the response to the Kremlin’s gambit must be “Thanks, but not thanks.”