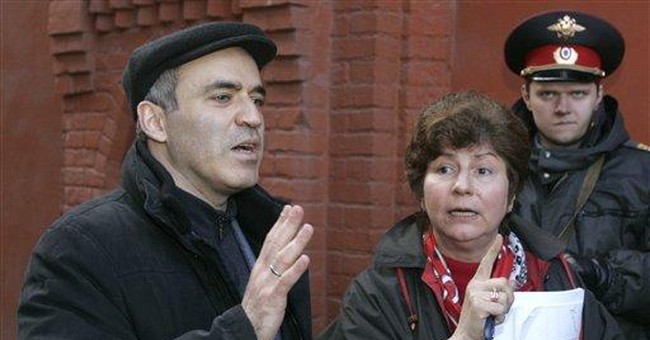 It was so, well, Soviet. This weekend's news clips showed Russian goon squads charging courageous opponents of an authoritarian Kremlin, truncheons flailing, roughing up the dissenters and arresting their leaders. One of those detained on Saturday was Garry Kasparov, the long-time World Chess Champion and a world-class champion of freedom.

Although Kasparov was subsequently released, his forcible detention is a sign of the extent of Vladimir Putin's repression and the master of the Kremlin's confidence that the Free World will not protest, let alone punish, the Russian government's ever-more aggressive behavior at home and abroad. If the Kremlin can move with impunity against the most visible, widely admired and gutsy of its critics, no one in Russia is safe. And the world beyond will become more dangerous, too.

Like the refuseniks of the Soviet Union – storied individuals like Andrei Sakharov, Alexandr Solshenitsyn and Anatoly Sharansky – Mr. Kasparov has been a formidable adversary for a government accustomed to having its own way. He has written powerful columns in publications like the Wall Street Journal. He has used his stature as one of history's best practitioners of chess, the national sport of Russia, to speak truth to power on behalf of millions of his countrymen who have become too intimidated to challenge Putin's systematic liquidation of what passed for democracy there.

Most recently, Garry Kasparov has entered the political fray, helping to found Other Russia, a somewhat ungainly coalition of parties from the Left and the Right who have joined forces to challenge Vladimir Putin's creeping totalitarianism and offer a democratic alternative in upcoming elections. The Kremlin has denounced Other Russia as "destabilizing." All other things being equal, the state's violence against the coalition's demonstrations this weekend and Kasparov's arrest will be followed by more draconian measures.

But all other things must not be equal. The Free World and its leader, the United States, must take steps now to help Freedom's Champions like Garry Kasparov in at least as forceful a way as it did when President Reagan assisted the USSR's dissidents.

For starters, Kasparov and others who are taking on the Kremlin's repressive actions must be raised up by the Bush Administration and Congress as test cases of the Russian government's worthiness for a place at the table of civilized nations – to say nothing of its inclusion in such company as the G-8 and World Trade Organization. Today's refuseniks, like those of yesteryear, are after all canaries in the mineshaft. If their voices are allowed to be extinguished (in some cases, literally), their oppressors will be emboldened in their menacing behavior towards others, including Western interests.

Even now, the Kremlin is arming to the teeth countries like Communist China and others, notably Hugo Chavez's Venezuela. It is enabling Iran's nuclear ambitions (despite a spat at the moment over payments due Moscow). It is using energy as a weapon against its neighbors and Europe. And it is threatening nuclear attacks against Poland and the Czech Republic if they cooperate in U.S.-led missile defense initiatives.

Another, particularly worrisome development is noted in a new paper just released by the Center for Security Policy . It involves a stealthy Russian government effort to become a major shareholder in, and influence over, the European Aeronautics, Defense and Space (EADS) consortium. EADS is, in turn, trying to become a major supplier of defense equipment to the Pentagon. Even under other circumstances, such an arrangement should be considered problematic in the extreme. In light, however, of what Putin is doing to Freedom's Champions in Russia and to our friends and interests elsewhere at the moment, it is completely beyond the pale.

As it happens, others who are Freedom's Champions are being badly treated closer to home. In this space last week, I reported that a film about what was happening to courageous anti-Islamist Muslims in the U.S., Canada and Western Europe was being suppressed by the Public Broadcasting Service (PBS). Unfortunately, that remains the case at this writing – a situation being enabled by the Corporation for Public Broadcasting (CPB), which paid $675,000 in taxpayer funds to make this film but is now cooperating in PBS's refusal to air it unless the documentary is reworked.

As a partner in the production company that made "Islam vs. Islamists: Voices from the Muslim Center," I have watched with horror as techniques out of Putin's playbook have been applied to prevent the telling of the story of freedom-loving Muslims who are – like the Kasparovs of Russia – warning about the ominous rise of totalitarian ideologies in their communities, and what that portends for the rest of us.

Matters have been made worse by the replacement of our film in PBS' "America at a Crossroads" line-up this week by a film produced by the series' host, Robert MacNeil, as part of a sweetheart deal with PBS and its Washington flagship, WETA. MacNeil's documentary is entitled "The Muslim Americans." It is an appalling, politically correct but disinforming paean to organizations like the Council on American-Islamic Relations (CAIR), the Muslim Student Association (MSA) and others who are part of the Islamist problem in this country, not the solution.

It is time to choose. Do we stand with those who have the courage to risk everything to oppose the totalitarians and their ideologies? Or do we stand with their oppressors, in the vain hope that the latter will treat us better?