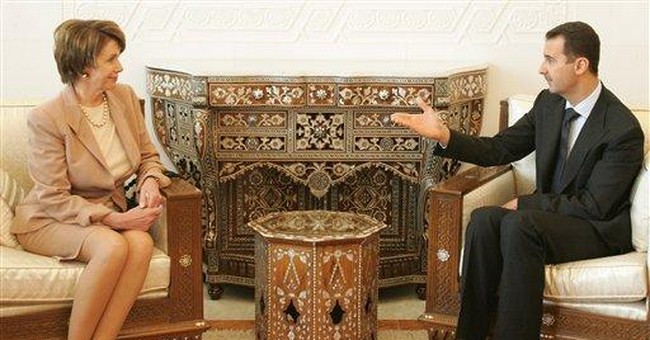 Speaker Nancy Pelosi is clearly one of those women who want it all. In her case though, this is not simply a matter of a lady seeking to have both a family and a fulfilling and successful professional life. Rather, the first female leader of the House of Representatives evidently seeks also to be the commander-in-chief and the secretary of state.

The job of the former would be circumscribed, if not rendered impossible, by the legislation Mrs. Pelosi is currently pushing through Congress. Her supplemental spending bill meant to provide resources needed to fund ongoing military operations would compel the removal of U.S. combat forces from Iraq by a date certain, irrespective of conditions on the ground.

Fortunately, the incumbent Commander-in-Chief is not prepared to relinquish the job just yet. President Bush has the votes to sustain his promised veto of such restrictions. And Sen. Carl Levin, the Michigan Democrat who chairs the Senate Armed Services Committee, seemed on a Sunday talk show to signal that even Mrs. Pelosi's kindred spirits in defeatism are not prepared to follow her lead at the expense of the troops, whose funding is now being jeopardized.

Still, the message being sent by a Speaker who signals division in the face of the enemy is insidious in the extreme. It encourages our foes, undermines the confidence of our friends and demoralizes those we have sent into harm's way.

Not content with such dubious achievements, Mrs. Pelosi has set her sights on Condoleezza Rice's portfolio, too. Using the Easter recess for a bit of globetrotting, the Speaker took her show on the road to Damascus. Speaking of which, once there, she fatuously announced that "We came in friendship, hope, and determined that the road to Damascus is a road to peace."

Even the Washington Post was so outraged by this performance that it unloaded on her in an editorial last Thursday. The paper called the Speaker's statement "ludicrous," noting that her host and purported partner for peace, Syrian dictator Bashir Assad "is a corrupt thug whose overriding priority at the moment is not peace with Israel but heading off U.N. charges that he orchestrated the murder of former Lebanese prime minister Rafiq al-Hariri."

The Post justifiably savaged the Speaker for trying "to substitute her own foreign policy for that of a sitting Republican president." It said that her "attempt to establish a shadow presidency is not only counterproductive, it is foolish."

What Madame Speaker's Iraq and Syria initiatives have in common is a preoccupation with handing the Bush Administration strategic defeats for domestic political gain, without regard for the predictable and probably high costs of such behavior to the nation. Now, that same dedication to such a short-sighted, tactical objective is evidently precluding effective action to redress America's energy insecurity.

Specifically, reports from Capitol Hill indicate that Mrs. Pelosi has refused to allow action on the 2007 DRIVE Act. This legislation is modeled on the Set America Free Coalition's Blueprint for Energy Security (http://www.setamericafree.org/blueprint.pdf). It would encourage important steps towards reducing what Mr. Bush has rightly described as the country’s "addiction to oil" by decreasing the U.S. transportation sector's reliance on immense quantities of gas and diesel fuels much of which are imported from countries that are unstable at best, and dangerous at worst.

The centerpiece of the Drive Act is "fuel choice" – which would permit gas consumption to be cut through a number of practical, near-term steps. These include greatly increasing the number of vehicles in America's automotive fleet that can use alternatives to petroleum-based fuels (namely, ethanol – derived from various sources, not just corn – and methanol) and creating incentives for the production and distribution of such liquids. The DRIVE Act would also help make electricity a widely used transportation fuel by encouraging the accelerated introduction of plug-in hybrids.

Legislation along these lines was first introduced in the House during the last session of Congress with strong bipartisan support under the leadership of Republicans Jack Kingston and Jim Saxton of Georgia and New Jersey, respectively, and New York Democrat Eliot Engel. Rather than allow the then-Republican majority a victory on energy issues in the run-up to a critical election, however, Democratic leader Nancy Pelosi opposed its enactment.

Now that the voters have entrusted both houses of Congress to Mrs. Pelosi's party, however, one might ask why the reintroduced, and vitally needed, DRIVE Act would still be hanging fire in the House of Representatives? The conclusion seems unavoidable: The Speaker is unable to put the national interest before her partisan ambitions to deny this president any successes during his remaining time in office. Unless she shifts course, it could be at least two more years before already overdue energy security measures are enacted.

If Nancy Pelosi's party is to have any hope of actually running the country (not to be confused with operating a "shadow presidency" that threatens to run it into the ground), the Democrats had better not only forego further negative measures like the recent meddling in Iraq and Syria. They must also do something constructive. A good place to start on the latter would be to take the lead in swiftly adopting the energy security program contained in the bipartisan, bicameral DRIVE Act.