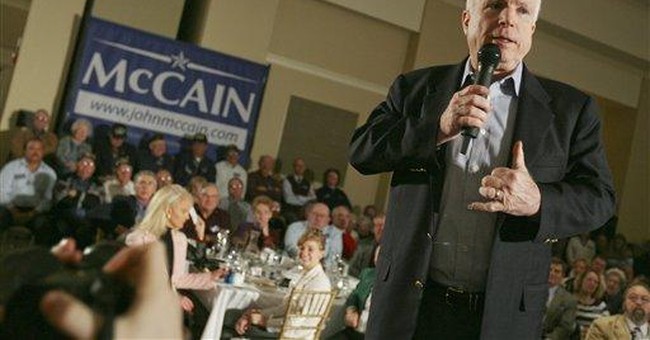 Fifty-one years ago, then-Senator John F. Kennedy published "Profiles in Courage" – a chronicle of political figures whose convictions prompted them to adopt unpopular stances for what they perceived as the Nation’s larger good.

One of the finest contemporary examples of such courage is Senator John McCain’s steadfast advocacy of American success in Iraq and absolutely correct, if unfashionable, warnings of the costs of failure. To his credit, when asked about the possibly catastrophic price such a profile might inflict on his presidential ambitions, the Senator has declared, "I would rather lose an election than lose a war."

Fortunately, fifty U.S. Senators agreed with Sen. McCain last week and rejected their Democratic leadership’s efforts to begin forcing the withdrawal of U.S. forces from Iraq and hamstringing those who, for the moment, would remain in-country. The bad news is that there are many more discouraging profiles in evidence elsewhere including, notably the following:

House Speaker Nancy Pelosi and Defense Appropriations Committee Chairman John Murtha are making a determined effort to buy the votes needed to pass legislation similar in its essentials to that just rejected by the Senate. Billions of dollars worth of domestic pork-barrel spending have been added to the war-funding supplemental in the hopes that enough Democrats, and perhaps a few Republicans, will be induced to agree to surrender Iraq by a date certain.

One wonders what John Kennedy would make of such a spectacle. He was, after all, the man who declared so movingly in his inaugural address in January 1961: "Let every nation know, whether it wishes us well or ill, that we shall pay any price, bear any burden, meet any hardship, support any friend, oppose any foe, in order to assure the survival and the success of liberty." Would he fail to appreciate the dangers associated with sending exactly the opposite message to today’s Islamofascist adversaries – enemies who are, in some respects, even more threatening than the international communists of Kennedy’s day?

The newly announced modus vivendi between the Islamofascist Palestinian organization Hamas and its rival for power, Fatah, has been well-received in parts of Europe and the United Nations. Some now seek to deal directly with the Palestinians’ resulting "unity" government, despite the fact that the lowest-common-denominator of this unification seems to be an undisguised commitment to destroy a country that is not only, as JFK put it, of one of our "friends," but a key ally in a dangerous part of the world: Israel.

While the Bush Administration has, for the moment at least, staked out a more robust position, it will inevitably come under growing pressure from its Quartet "partners" (the European Union, the United Nations and Russia) to acquiesce to the new Palestinian reality – and to coerce Israel to do the same. That will be the practical effect of negotiations with Hamas’ now-partner, Fatah’s Mahmoud Abbas, who may continue to profess for Western audiences a desire to live in peace with the Israelis. But Abbas’ idea of a profile in courage has been to pledge to live in peace with Hamas, on its terms. Which means any Palestinian nation that might emerge under his leadership would be a state-sponsor of terror threatening immediately Israel and, in due course, other freedom-loving peoples.

Then there is the discouraging profile of Special Envoy Christopher Hill, the driving force behind U.S. capitulations to the North Koreans. In his pursuit of the will-o’-the-wisp of denuclearizing the North, Amb. Hill has insisted that the Treasury Department accede to Pyongyang’s demand for the return of $25 million frozen when a Macau bank, Banco Delta Asia, was sanctioned for laundering high-quality North Korean counterfeit American currency.

Alas, Kim Jong-Il has Hill’s number. It is predictable that the North’s next precondition for further "progress" in negotiations (not to be confused with actual disarmament) will be an end altogether to the sanctions aimed at countering such acts of economic warfare against the United States. Treasury has rightly been resisting, but without strong support from Congress, it may not be able to stave off the appeasers much longer.

This illustrative list of discouraging profiles would be incomplete without at least passing mention of behavior so contrary to the national interest that our government refuses even to acknowledge that it is afoot. It is going forward under the rubric of the Security and Prosperity Partnership of North America (SPP) and is shaping up to be one of the greatest threats to U.S. sovereignty of all time.

The Bush administration has generally dismissed concerns about the roughly two-dozen U.S.-Canadian-Mexican working groups beavering away in secret to produce tripartite understandings, rules and regulations that will "harmonize" virtually every facet of business and society in North America. In much the same way the European Common Market inexorably mutated into the European Union, the idea is, in the words of the new trilateralists, to "evolve by stealth" a "North American Community" out of the North American Free Trade Agreement (NAFTA). Indeed, it has only been possible to ferret out information about these groups and their ominous ambitions by filing Freedom of Information Act requests – something the public interest group Judicial Watch has done in recent months.

Instead of trying to abandon our vital interests in Iraq, Congress should be demonstrating the courage it will take both to win the war and to deserve to win future elections. Our leaders must support our friends, oppose – rather than reward – our foes and assure the continued survival and success of liberty here at home in the face of bureaucrats and business interests that would stealthily undermine both.