Putin's back to the future 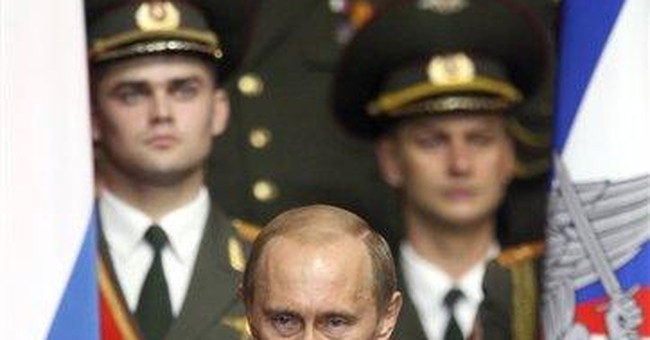 It is becoming increasingly dangerous to be a critic of Vladimir Putin, the elected dictator of Russia. That is, as KGB thugs like Putin used to say during the Soviet era, “no accident, comrade.”

The most recent authority on the subject of Putin’s increasingly ominous behavior at home and abroad to have met an unpleasant fate is Paul Joyal. He is an internationally renowned expert on the former Soviet Union who had the temerity last week to accuse the Russian government on the NBC TV program “Dateline” of murdering Alexander Litvinenko.

Litvinenko was himself a former Soviet intelligence agent who worked with and then turned against Putin. He had blamed the Putin regime for killing another Putin critic, the courageous Russian journalist, Anna Politkovskaya, in Moscow last year. Litvinenko wound up dead in London from poisoning with an exotic, highly radioactive element called Polonium 210 widely believed to have come from Russia.

Of the Litvinenko murder, Joyal told “Dateline”: “A message has been communicated to anyone who wants to speak out against the Kremlin: ‘If you do, no matter who you are, where you are, we will find you, and we will silence you – in the most horrible way possible.’” His words appear to have been eerily prophetic.

On Thursday, two unidentified men attacked Joyal in the driveway of his home, in a way seemingly meant to send its own message: By shooting him once in the groin. Thanks to quick action by his wife, a nurse, he did not bleed to death on the spot and is recovering from his wound.

Joyal did not live in Moscow, or even some other foreign capital. His home is in Adelphi, Maryland, a quiet suburban community roughly 12 miles outside Washington, D.C.

The Kremlin’s apparent willingness brazenly now to strike at its foes wherever they may be is all too reminiscent of past, ruthless measures taken by Russian and Soviet rulers to crush internal and external dissent. Unfortunately, it is but one piece of the reprise Vladimir Putin seems to have in mind for his country.

For example, as he systematically consolidates absolute power in Russia, Putin is increasingly putting the squeeze on his country’s neighbors in what the Kremlin refers to as “the near abroad.” Also in his cross-hairs are nations as far away as Western Europe. Notably, he is using threats of disruptions in Russian energy supplies and, in some cases, actual cut-offs for strategic ends.

In addition, Putin is feverishly arming America’s actual or potential foes. Recent transactions have included: selling anti-aircraft weapons to Iran to defend its nuclear sites against U.S. or Israeli bombers; state-of-the-art missiles, planes, ships and other offensive hardware to China that are greatly enhancing its power-projection capabilities; and over 100,000 AK-47s to Hugo Chavez’s Venezuela, the weapon of choice for his anti-American program of subversion throughout the hemisphere.

Vladimir Putin has recently launched a particularly momentous strategic campaign. He seems determined to replay what was, arguably, the turning point in the Cold War – the juncture when Ronald Reagan’s carefully articulated and faithfully implemented plan for destroying the Soviet Union began the inexorable roll-back of the “evil empire” that Putin served and loved.

The moment was 1983 when President Reagan, Margaret Thatcher and the leaders of the Netherlands, Belgium, Italy and Germany successfully resisted, and ultimately overcame, the most concerted public relations/political warfare effort ever mounted by the Soviets, their agents of influence and fellow-travelers in the West. Millions of people took to the streets to block the deployment of hundreds of long-range Intermediate-range Nuclear Forces (INF) ballistic and cruise missiles in western Europe, threatening to topple the five basing-country governments if their demands – and the Kremlin’s – were not heeded.

This attempt by Putin’s predecessors in the Kremlin (he was doing his bit well down the food-chain, working the problem as a KGB agent in East Germany) to intimidate, seduce or coerce the allies into giving up their necessary response to the USSR’s deployment of hundreds of deadly SS-20 missiles proved to be the high-water mark for Soviet Union. Mikhail Gorbachev later tried to save at least some face by negotiating an INF agreement with Mr. Reagan, even though it involved a total ban on such missiles – something the Soviets had previously, categorically rejected.

Now, Vladimir Putin seems to want once again to threaten America’s allies to prevent them from defending themselves. This time, the pressure is being brought to bear on states that Mr. Reagan helped to escape from the Soviets’ grip: Poland and the Czech Republic. They have expressed a willingness to position respectively interceptors and radars to protect Europe and the West against the emerging threat of missile attack from Iran and potentially other Mideast nations.

Even though such an allied missile defense system will be incapable of stopping a concerted Russian attack, Moscow is now vowing to abrogate the INF Treaty and attack the Poles and Czechs should they go ahead with this deployment. Popular opposition in Europe is once again being fomented. Mass demonstrations and other, more concerted Kremlin-backed actions seem likely if and when the missile defense sites’ construction goes forward.

The question is: Will George Bush allow his administration to be thwarted by the political equivalent of Putin’s murderous efforts to silence his critics. Or will he, like President Reagan before him, make “INF, the Sequel” have as happy an ending as the original?