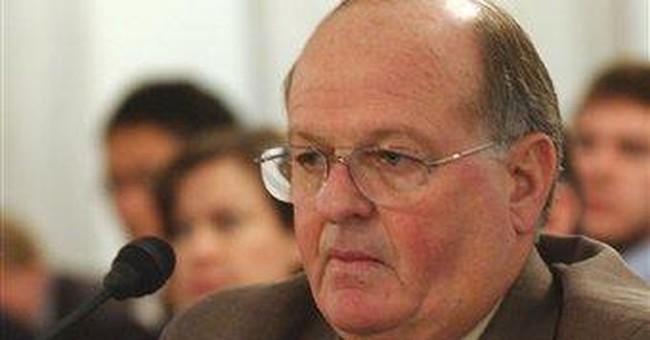 “Congressmen who willfully take actions during wartime that damage morale and undermine the military are saboteurs and should be arrested, exiled, or hanged.”

It is, of course, unimaginable that the penalties proposed by one of our most admired presidents for the crime of dividing America in the face of the enemy would be contemplated – let alone applied – today. Still, as the U.S. House of Representatives and Senate engage in interminable debate about resolutions whose effects can only be to “damage morale and undermine the military” while emboldening our enemies, it is time to reflect on what constitutes inappropriate behavior in time of war.

Scarcely anyone seems to consider the conduct of the Congress at the moment inappropriate, to say nothing of a hanging offense. As various sitting Members, whose day jobs increasingly are those of presidential candidates, jockey to outbid one another in their defeatism, the talk is not about whether such behavior is appropriate in time of war – or consistent with the national interest.

Instead, official Washington is obsessing about a peculiar finding last week by the Defense Department’s Inspector General (IG). It concludes that an effort by the Pentagon’s policy organization to critique intelligence assessments prior to the liberation of Iraq involved “inappropriate” behavior.

Specifically, the IG found fault with an effort undertaken after 9/11 by several employees then-working for the Defense Department’s policy bureau. This effort infuriated the Central Intelligence Agency as it questioned whether the CIA and the rest of the U.S. intelligence community were being blinded in their assessment of ties between Saddam Hussein’s Iraq and al Qaeda due to a working assumption that secular Baathists and Islamofascist terrorists would not cooperate against their common foe: Us.

In fact, a wealth of evidence was available to the CIA that indicated a relationship existed between Iraqi agents and al Qaeda operatives, spanning more than a decade. It was this evidence that was compiled by the Defense Department staff members and presented, first to their own leadership and then, as directed, to other senior policy-makers, intelligence officials and legislators. Much of this material was documented in a Pentagon memo supplied to the Senate Intelligence Committee in the Fall of 2003. The data was leaked to Stephen Hayes of the Weekly Standard, who published lengthy excerpts the next year in his book, The Connection: How al Qaeda’s Collaboration with Saddam Hussein Has Endangered America.

What makes the report signed out by Acting DoD Inspector General Thomas Gimble so bizarre is that it determined the Pentagon policy organization’s activity in this area to be both legal and authorized. Neither, according to Mr. Gimble, did that activity mislead Congress.

As it happens, these findings were consistent with two earlier, independent reviews that concerned this matter. One was unanimously approved by the Senate Select Committee on Intelligence in July 2004. It found that the Defense Department team “played by intelligence community rules” and that “policymakers’ probing questions...actually improved” the CIA’s products.

The other was the unanimous, bipartisan report about intelligence concerning Iraqi weapons of mass destruction issued in March 2005 by the Silberman-Robb Commission. In its cover letter to the President, the Commissioners wrote: “Sharp questioning” of an intelligence assessment is not “‘politicization’; it is a necessary part of the intelligence process.”

It is an indication of the sorry state of our polity that some legislators are so intent on justifying their opposition to the conflict in Iraq that they persist in claiming that then-Under Secretary of Defense for Policy Douglas Feith and his organization engaged in intelligence skullduggery, misleading them and the nation in the run-up to the invasion in 2003. The most prominent of these are the newly installed chairmen of the Senate Armed Services and Intelligence committees, Carl Levin and Jay Rockefeller, respectively. The Wall Street Journal has dubbed the former “Senator Ahab” for his “obsessive” pursuit of this white whale of a story about “politicized” intelligence. I guess we should call the latter Ishmael.

Consistent with his past, outlandish practice, Sen. Levin declared the IG report a “devastating condemnation” of senior DoD officials, one that confirmed “intelligence relating to the Iraq/al Qaeda relationship was manipulated by high ranking officials in the Defense Department. Rubbish.

Doug Feith is an old friend of mine. He is among the most thoughtful, careful and conscientious public servants I have ever known. The only truly “inappropriate” behavior evident at the moment is the ongoing effort led by Senators Levin and Rockefeller to impugn the integrity, quality and, yes, the appropriateness of policy-makers’ efforts to ensure that far-reaching national security decisions are made on the basis of the best information available.

The Journal has properly warned that Senator Ahab’s misbehavior is likely to have implications far beyond the immediate disservice it does to Mr. Feith and those who labored so ably under him. It will likely also have a severely chilling effect on the willingness of policy-makers rigorously to challenge, and thereby to improve, the quality of the intelligence they are getting about tomorrow’s threats.

If there’s one thing that really should be a hanging offense, it is behavior that results in our being even less equipped to deal with such threats than we were before this phase of the War for the Free World began on 9/11.