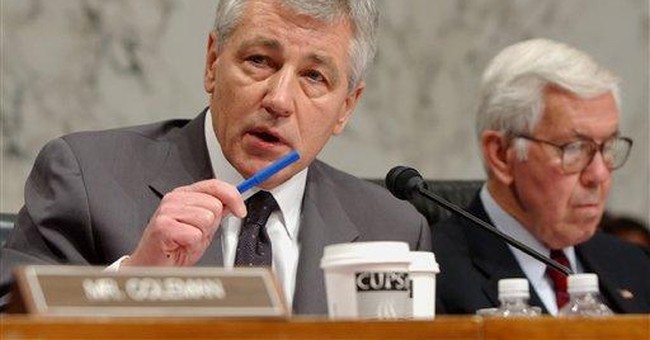 Members of the 110th Congress are behaving like drunken drivers with respect to the conflict in Iraq, veering wildly all over the road, seemingly oblivious to the risk they pose to others. Before they do actual harm by voting on various resolutions aimed at repudiating President Bush and further undermining his wartime leadership, they should be obliged to sit through the sort of sobering, behavior-modification program to which courts assign those found operating heavy equipment while inebriated.

The centerpiece of the "Defeat for Iraq" (DFI) remediation program I have in mind would be a couple of videos, too. Any sentient being will be affected by these films – perhaps even partisan Democrats whose antipathy to President Bush is so profound that they are willing to have the country lose a war in order to hand him a defeat.

The first of these video therapies would be "Obsession: Radical Islam’s War Against the West." This documentary dissects the phenomenon of Islamist totalitarianism, drawing on the words of its practitioners and promoters in Saudi Arabia, Iran, Lebanon, the Palestinian Authority and in Western nations. While other experts, both Muslim and non-Muslim, provide important context and texture, the vivid counterparts in "Obsession" to the gruesome gore of the DWI movies are the bloodcurdling calls to jihad and “death to America” emanating from our enemies’ pulpits, television outlets and other propaganda instruments.

Viewers of this film can harbor no illusion that the war we are in is confined to Iraq. It is, instead, a truly global conflict with an ideology, Islamofascism, that is determined to destroy us. Should those animated by this ideology succeed in defeating America in Iraq, they will be one step closer to achieving their avowed goal: global domination.

It would be a good thing if some judge would require clueless aging celebrities like Jane Fonda and wannabes like Cindy Sheehan to see “Obsession” now that they are behind the wheel of a nascent anti-war movement. But such folks are like the hardened repeat-offenders for whom DWI school is but a speed bump, an inconvenience on the way to their next irresponsible act.

One would hope, however, that many – if not all – Members of Congress would behave better if confronted with the reality of the determined and implacable enemy we face in this War for the Free World. To be sure, there are the equivalent of unrepentant drunks on Capitol Hill – members whose indifference to the far-reaching strategic consequences of their actions is a matter of record. (In some cases, they actually are unrepentant, or at least unreformed, drunks.)

Still, it seems unlikely that the majority of legislators would be willing to be associated with defeatism in Iraq, let alone to champion it, were they absolutely clear about the stakes. If, however, sitting through “Obsession” does not induce senators and congressmen to understand how high the costs of such behavior would be for the country, the DFI course would take a page from DWI programs’ playbook: Show them another film.

The next one should be a terrific short video produced late last year by one of Hollywood’s most successful directors, David Zucker, and his partner, Myrna Sokoloff. It can be viewed on YouTube.

Entitled "the Fabulous Baker Boy," it treats with appropriate contempt – and hilarious sight gags – the centerpiece of the 79 recommendations served up by the Iraq Study Group (ISG, better known as the Iraq Surrender Group): the idea of having the future of Iraq determined in negotiations with Iran and its wholly owned subsidiary, Syria. ISG co-chairman James Baker is parodied as a hapless, sycophantic appeaser of Iranian President Mahmoud Amedinejad, playing Neville Chamberlain to his Hitler.

Amazingly, the idea of negotiating with the Islamofascist regime most responsible for the mayhem in Iraq – Iran – has increasingly become a staple of the defeatists in Congress. Virginia Senator Jim Webb featured it in his party’s response to the President’s State of the Union. Most, if not all, of the Democratic presidential candidates have embraced it, as, of course, has that dark horse contender for the Democrats’ nomination, Republican Sen. Chuck Hagel.

For most legislators, the prospect of having their face and name – rather than Jim Baker’s – ridiculed for believing we can safely and usefully negotiate with Iran our surrender of Iraq may be enough to sober them up. They certainly should be on notice: They will be held to account, later if not sooner, if they recklessly ignore General David Petraeus’ testimony that he will be unable to succeed in Iraq if the Congress denies him the manpower and wherewithal called for by the President.

What is more, such legislators will in due course be held responsible for favoring defeat over victory in the Iraqi theater and making our triumph infinitely harder in Afghanistan and elsewhere. At some point, like incorrigible drunk drivers, they will have their license to enact legislation revoked by an electorate that did not vote last November for a "change" that makes things far worse.