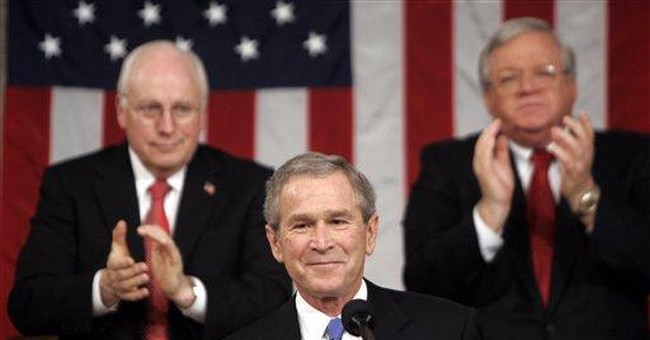 Tonight’s [Tuesday’s] State of the Union address should be unlike any in recent memory. Not because George W. Bush turns it into the expected paean to bipartisanship, or abases himself before his newly ensconced opposition. Rather, it should stand apart because the President uses the occasion to speak unvarnished truth to power.

In fact, Mr. Bush must use it as a national “trip to the woodshed,” an opportunity – a perhaps as a practical matter, his last on such a stage – to call to account the small-minded politicians who are telling the American people what they want to hear about the war we are in, rather than the unpleasant facts. In the process, they are putting the Nation on a course that invites the greatest possible peril. They must be held, as the President himself put it last week, “responsible” for advancing courses of action doomed to fail in Iraq and far beyond.

Other Presidents have followed Ronald Reagan’s lead in using individuals seated with the First Lady to assign a human face to various policy points. On this occasion, Mr. Bush will doubtless do the same, populating the visitors’ gallery with wounded servicemen and women, and loved ones of those who have selflessly given their lives fighting our Islamist totalitarian enemies. Their sacrifice deserves to be recognized, and acclaimed.

President Bush should also have another group represented there: the people of Iraq. No, not the ambassador or parliamentarians. He should have regular Iraqis, the kind of ordinary folks who, by the millions, took us at our word when we liberated them. Those who took unimaginable risks to stand and vote for a different sort of Iraq than the terrorists and Iran’s totalitarian neighbors are determined to impose on them.

For those are the people that American politicians of both parties are preparing to abandon. Mr. Bush must insist that everyone listening to his address – Democrats and Republicans, the audience in the chamber and that around the world – look those people squarely in the eye.

As the President does so, he must state certain facts: One of the finest things this country has done in decades was to put an end, at long last, to Saddam Hussein’s misrule. We did it because Saddam actually posed a threat to us, as well as his own people, that was both real and intolerable. And this nation’s honor would be indelibly stained were we now to abandon to his despotic would-be Baathist, Wahhabi or Iranian-allied successors the untold numbers of those Iraqis who want no more of sectarian strife than we do.

To be sure, there are those in our country, and in the Congress, who seem indifferent to these realities. Stating them may diminish the numbers of ovations and be met with scoffing by his opponents and the pundits. But they must be recited tonight and with relentless regularity from now on.

For notice must be served: There will be far more blood on our hands if we try to wash them of this affair, either by simply “redeploying” to someplace where we hope we might yet be welcome, or by surrendering Iraq to the Iranians via so-called “regional negotiations.”

Worse yet, such further bloodshed will not be confined to Iraq. Our collapse in that distant place will greatly add to our own future peril from enemies abroad and at home determined not only to defeat us over there, but here, as well.

Fortunately, if the President issues such a necessary warning, his will no longer be a voice in the wilderness. Indeed, the public is increasingly being treated to televised information about the true, and growing, threat of Islamofascist terror in the West. It takes the form of fictionalized accounts (such as Fox’s wildly popular drama, “24”) and factual documentaries (like programs aired this weekend on Fox News and CNN about, respectively, the operations of the terrorist organization Hezbollah in America and the virulent hatred towards the West being incubated by Islamists in places like the United Kingdom).

Our present circumstance is, as the military says, “no drill”: Our enemies are truly on the march and our perceived weakness invites their mayhem here, as well as elsewhere.

Ironically, the most strident of Mr. Bush’s critics on Iraq – including many among the gaggle of presidential candidates who will be in the House chamber tonight fancying themselves giving such addresses in the future – decry what they regard as his mistake, and that of his predecessors, in ignoring Afghanistan. They profess a willingness to put more troops there to fight the Islamist totalitarians of the Taliban and al Qaeda. They resolve not to allow that tormented land once again to become a safe-haven for, and state-sponsor of, terror.

Yet, that is precisely what the same people propose now to do with Iraq, a vastly more populous and wealthy place. In truth, our defeat in Iraq will make it impossible to keep Afghanistan free, let alone protect ourselves from what will subsequently emerge out of the terrorists’ new Iraqi base.

Set aside the defeatists’ demeaning of the sacrifice of our troops. Or the shame of condemning to interminable horrors those in Iraq we promised to help. Our political elite and chattering classes deserve a stiff rebuke for ignoring – and encouraging the public to ignore – the truth: In a global war for the Free World, there is nowhere to run.

So, when Mr. Bush ascends the dais in the House chamber tonight, let us hope he does not shrink from delivering what is needed – an irresistible call to renewed American greatness, combined with a stern challenge to those who fail that test and who would, by encouraging our countrymen to do so as well, imperil us all.