Memo to the president 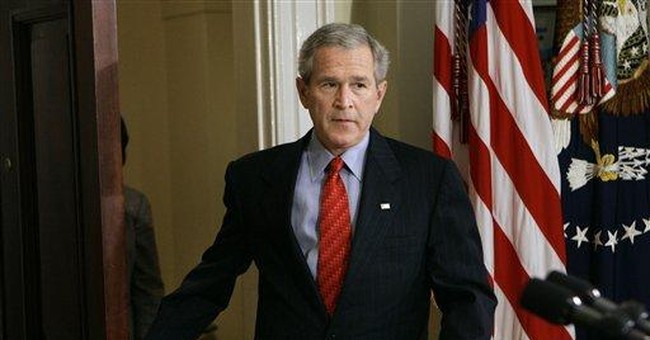 By now you have been getting lots of free advice about what to say – and what not to say – in your remarks Wednesday about a new strategy for Iraq. Some of it, like Jim Baker’s recommendations that would have translated into our defeat, you have wisely rejected. You have evidently decided to accept others reflecting your laudable determination to prevail, including staff shake-ups and surging of forces.

The leaks depicting your decisions to date seem, however, to reflect the same miasma that has afflicted many of your critics – namely, the perception that strategic adjustments are in order only vis a vis Iraq. A variation on the theme is the mistaken belief that we can make changes in policy or strategy towards Iraq without acknowledging, let alone reckoning with, the fact that it is but one front in a far wider war.

In case the free advice you have taken aboard to date hasn’t addressed these points directly, I would respectfully suggest that you factor into your thinking the following suggestions:

First, at this moment of critical redefinition, you have to root your strategy for Iraq in the context of the larger, truly titanic and global conflict being waged against us by a totalitarian ideology. In the interest of clarity and a new sense of direction, you must give new names to the war and to the enemy we confront. It is no longer enough to describe the former as “the war on terror” and the latter as “terrorists.”

Today, we are engaged in “the War for the Free World,” a formulation that makes clear that nothing less than the future of freedom and Western civilization is at stake. And our principal enemies at the moment are adherents to “Islamofascism,” a term you have used twice before. Most Muslims want no more than the rest of us to live under the sort of repressive theocracy such ideologues seek. But unless the Islamists are stopped, most immediately – but not exclusively – in Iraq, we will surely confront their violent bids for power elsewhere, including here.

To be sure, you have made such points from time to time in the past. But it has never been more important to underscore this central reality behind the changes you will be announcing Wednesday. Not least, by so doing, you can make clear why it is impossible simply to acquiesce in the face of congressional criticism and negative polls to alternative strategies that will result in a terrible loss for the Free World in Iraq – and further embolden its enemies and their enablers.

As you know, chief among these foes at the moment is Iran. Again, the problem is not confined to Iraq, although Tehran is certainly making every effort to ensure freedom’s defeat there. The Iranian mullahocracy is also actively engaged in international terrorism, destabilizing Lebanon, explicitly threatening Israel and the United States and amassing the nuclear weapons and ballistic missiles needed to carry out such threats.

Consequently, your new strategy must make clear that it is being designed to counter Islamofascist Iran both in terms of its subversion in Iraq and with a view to working with the Iranian people to bring down a government that they hate as much as we do. Toward that end, in your speech Wednesday, you should call attention to three further initiatives:

O Millions of Americans can help the war effort by investing terror-free – that is, by ensuring that their money is not invested in companies that do business with Iran and other terrorist-sponsoring regimes. Call for the Nation’s public pension funds, mutual funds and other institutional and private investors to deny resources to our enemies and, thereby, to reduce fiduciary risks associated with such investments.

O On Sunday, General Motors unveiled a new hybrid electric vehicle called the Chevrolet Volt which could allow many drivers to avoid using gasoline at all. The widespread application of this “E-flex” technology – essentially an electric vehicle which uses its gas-powered internal combustion engine only to recharge its batteries – could dramatically reduce our “addiction to oil” evident in the U.S. transportation sector’s dependence on foreign sources of petroleum. By so doing, we can further cut into the wealth our enemies use to threaten us.

For the promise of approaches like “E-flex” to be realized, though, America is going to have to have a reliable and large-scale source of lithium-ion batteries such vehicles require. Mr. President, make addressing this requirement a key part of a new, bipartisan energy security component to your new strategy.

O Finally, you need to make clear the importance of America’s freedom of action to defending this country. Under your leadership, we have enlisted dozens of countries in a U.S.-led Proliferation Security Initiative (PSI). It facilitates joint action to detect and defeat the spread of weapons of mass destruction.

Unfortunately, the new Democratic leadership of the House of Representatives has included language in its so-called “9/11 implementation legislation” (scheduled for floor action today) a sense of the Congress resolution that PSI should be subjected to the approval of the UN Security Council. This would have the effect of giving Russia and China a chance to veto, or otherwise adulterate, this important program – possibly denying us counter-proliferation tools more needed today than ever before. Draw the line on this sort of woolly-headed thinking now.

In short, Mr. President, your speech tomorrow must show the American people and their elected representatives that you are squarely addressing the challenge of our time – of which Iraq is but one part – in a comprehensive, multifaceted and determined way. Your intention to win must be forcefully communicated, not just because it is preferable to losing, but because the alternative to victory in this War for the Free World is unacceptable.