Why has the Anti-War Movement embraced Reagan? 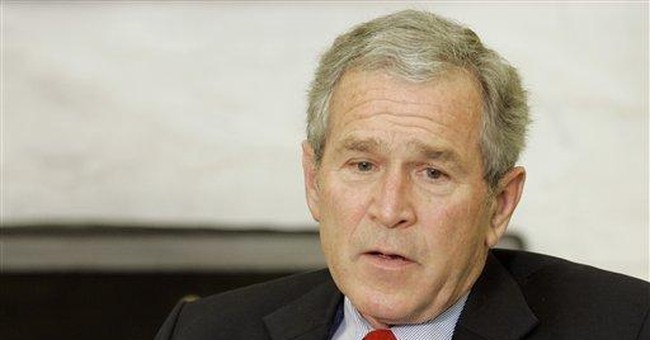 Faced with the same situation in the fall of 2002 as President Bush faced, these anti-war activists do not believe that President Reagan would have invaded Iraq. They may be right. But these critics of the War in Iraq go further and assert that, given current circumstances, President Reagan would: “cut and run”.

Repeatedly, in my research I come across quotes like this from Reagan Biographer Richard Reeves, writing in the Los Angeles Times: “On the night of Oct. 23, 1983, a suicide bomber drove a truck into the lobby of the Marine barracks, set off a huge explosion and killed 241 Marines. Reagan’s response was to talk tough about staying the course, then "redeploy" the Marines -- safely onto American ships in the Mediterranean. Cut and run.”

Reeves believes that President Reagan would not stay the course in Iraq, but instead he would pull out following tough talk. This is the approach favored by the recently released Iraq Study Group proposal.

While none of us know for sure what President Reagan would do, let me add my voice to those that are attempting this impossible task. I have spent the last five years of my life researching this remarkable man at Rancho del Cielo, President Reagan’s Western White House, which is being lovingly preserved by Young America’s Foundation.

So while President Bush huddles with his foreign policy staff in Crawford to craft a new agenda, what would President Reagan do, given the status of our position in January 2007?

Most commentaries comparing President’s Bush and Reagan start with an incorrect premise. The commentators begin by comparing the struggle in Iraq with the struggle against the Soviet Union. The War on Terror is not the Cold War.

This comparison is nonsense. Iraq is a much smaller country, and we are not fighting regular soldiers. The Soviet Union was a nuclear power with the ability to project military and naval power from the Atlantic Ocean across Eurasia to the Pacific Ocean. To compare these adversaries is comparing an elephant to a peanut. It doesn’t stand up to scrutiny.

The Cold War was a moral struggle against an ideological enemy that murdered millions of its own citizens in a drive for world Marxist domination. As much as we shudder at the radicals that run Iran and Al-Qaeda, they pose only a fraction of the threat offered by the former Soviet Empire’s Army, Navy, and nuclear arsenal.

Iraq is not currently a functioning state. It is a country in the midst of a civil war whether the Bush administration wants to admit it or not. Iraq has only stayed together in the past because Saddam Hussein used fear to keep the ethnic strife in check. With Saddam’s execution, that chapter in Mideast history is officially closed.

Today, Iraq is being held together by the American military. The current government has many challenges outside the Green Zone in Bagdad. The new Iraqi Army is improving, but the police force is still corrupt and infiltrated with insurgents.

In Vietnam we were helping a weak, corrupt regime, South Vietnam, hold onto power when faced with a civil war from the Viet Cong and an aggressive neighbor North Vietnam. In today’s Iraq the aggressive neighbor is Iran. It is no secret that the roadside bombs and much of the munitions pouring into Iraq are coming from Iran. We are possibly a few mistakes away from open conflict with Iran.

President Reagan’s strategy for Vietnam was simple. Win or get out. President Reagan was not a fan of using American troops unless they could overwhelm the enemy and get out in a timely fashion.

In Vietnam, he advocated attacking Hanoi, destroying the North Vietnamese government and closing the Haiphong Harbor. These were actions that were not taken, and we know the dismal history of Vietnam. Vietnam’s sorrows only intensified when America cut and ran.

United States’ forces are not beaten on the battlefield. They are beaten in the halls of Congress, the State Department, and countless other bureaucratic buildings in Washington D.C. President Reagan understood the American people and would never have asked them to join an unending war with no clear objectives and end point.

He also would have been dispirited to learn about the “new mission of the United States Military to build schools and health clinics in Iraq.” President Reagan believed that the military should be a fighting force not an alternative to the Peace Corps in violent spots around the globe.

But President Reagan’s goal would never be as arrogant as to attempt to make them by force liberal democracies. President Reagan believed in the power of ideas. He would speak out and share those ideas, but it is impossible to impose democracy or freedom by force. That is an evolutionary process that different peoples must transition to on their own.

We can point to the shining city on a hill, and President Reagan would use his clear voice, vibrant ideas and America’s example to point the way.