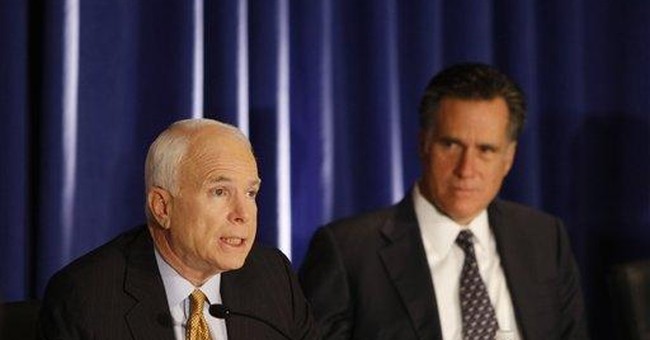 "Fearing a political backlash against Democrats," Roll Call reported, "Senate Majority Leader Harry Reid (D-Nev.) has told the White House that it must serve up support from Republican presidential nominee Sen. John McCain (R-Ariz.) if it hopes to ensure bipartisan backing for a massive economic bailout package by week's end."

Falling for this trick by Sen. Reid and the other Obama supporters in the U.S. Senate could severely damage Sen. McCain's campaign. McCain should reject the plan and use the issue to draw a distinction between himself and President Bush for good policy reasons.

Wall Street is in trouble because of misplaced bets on derivatives and other financial instruments. It is not the purpose of tax dollars to limit the damage to multi-millionaires for trading mistakes they have made.

The hyper-ventilation of New York hedge-fund operators reminds us that "masters of the universe" can make big mistakes. The media can laud the supposed great work of Paulson and Congress for diverting the economy from a new version of the Great Depression, but America isn't buying it. The only depression is in the suites of these traders' offices.

Average Americans should be concerned -- concerned they are being taken again. Any plan crafted by the pro-business, Wall Street veteran Paulson will be dramatically changed as it runs the gauntlet of the anti-business House of Representatives. Who knows what the plan will contain when it emerges from the halls of this rightly unpopular institution.

But here is what we know so far. While the plan has been dubbed the "son of RTC", referencing the independent Resolution Trust Corporation which bought the assets of failed savings and loans in the 1980s, it will be very different from the RTC. The RTC took the assets of defunct savings and loans. Shareholders in these savings institutions were wiped out. However, the Paulson process is protecting Wall Street. The U.S. Treasury Department will seek to buy as much as $700 billion in toxic assets from institutions that are still solvent. This will protect those same current corporate titans who ran many of these firms into the ground with excess leverage and wayward trading.

Because this is being done by the government directly, the balance sheet of the U.S. Government is at risk for further deterioration of the assets. Treasury, by some accounts, plans to buy the assets through "reverse auctions". But the danger of naïve government functionaries buying assets they don't understand is scary for the taxpayer. Banks could sell the U.S. Treasury assets much shakier than currently anticipated. Since these bureaucrat buyers have no skin in the game as private buyers would have, the possibility of additional shell games mushrooms.

Also the plan includes the insuring of money-market funds with over $3.4 trillion in assets. This amounts to the nationalization by the U.S. Treasury of the commercial-paper market. Money-market funds are generally low-risk commercial paper, but with a government guarantee, the risks will climb and the due diligence of the buyers will fly out the window. Before long, Wall Street will be selling bad assets here. When risks are divorced from investments, you naturally have an increased opportunity for fraud.

Some press reports say that Congress is demanding equity in the firms that sell assets to the Treasury. This is direct nationalization similar to the warrants demanded by Treasury before they lent money to AIG. The wholesale nationalization of much of the mortgage market and many banks sets a bad precedent.

America has more than 200 years of bankruptcy law that should be governing these transactions. If managers who accumulated too much risk by not adequately qualifying lenders are allowed to continue in their jobs, we are doing a disfavor to the intelligent managers who accepted lower returns for more prudent lending practices. The shareholders and management at imprudent firms should be wiped out. This allows new managers and companies to fill the void. This type of creative destruction always strengthens the economy in the long run.

McCain should reject the logic of the Wall Street hedge funds and turn the tables on Obama, Bush and their Wall Street supporters. John McCain has an excellent opportunity to prove he is the real reformer.