Saved by the KGB 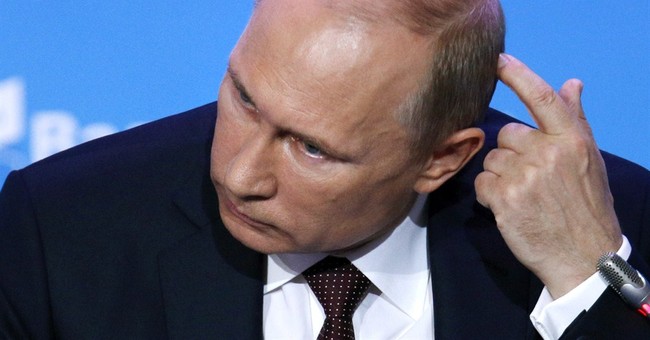 And so the government of the United States has put its foreign policy in the steady hands of President Vladimir Putin, and the KGB Americans from coast to coast are breathing a sigh of relief. In Congress, the left and the right and those in between are relieved. In recent months, it has become abundantly clear that the president of the United States is not up to the task. He would rather lecture us on domestic issues, such as how to run up trillions of dollars of debt. Then he would like to work on his golf game -- do you recall how our elites laughed and laughed when the former Supreme Commander of Allied Forces in Europe, then the Supreme Commander of NATO, and finally the two-term president of the United States, Dwight Eisenhower, played golf?

Now our foreign policy is in the hands of true professionals. The KGB has a spotty record on human rights, but everyone says they are pros at handling the realities of power. In fact, in yesteryear when they had real power they were -- you will remember the term -- "prudent."

Oh, yes. It would probably be better to have the foreign policy of our country residing in the hands of an American professional, say, Henry Kissinger. But Henry has limited time these days and besides his power base is compromised. He has many Republicans on his side, but the American left has never been a big fan of Henry's. Besides, over the last few weeks Putin has shown that he has the will and the agility to run foreign policy for his country as well as ours, or at least ours when the president is Barack Obama, a man who before coming to the White House had been a part-time United States senator for four years, a state senator for three terms, and -- most spectacularly -- a community organizer. Naturally his experience in foreign policy has been a little thin.

In welcoming Putin's takeover of American foreign policy I do not mean to imply that we Americans have become isolationist. I think most of us recognize that America has responsibilities throughout the world. People in other lands depend on us. The weak depend on us. Yet, there is a split among Americans as to the nature of those responsibilities, and during this respite from foreign policy we will have time to sort out what we want to do after President Obama retires. Will we be following the goody-goody left and stick our noses into every human rights unpleasantness, possibly with some high-level bombing as in Kosovo in years gone by? Then bug out? Will we lecture the world on shaky pieties as Secretary of State Jean-Francois Kerry has done? Or will we act in a measured fashion, employing diplomacy, and perhaps the military, where we are welcome or where we can make a difference?

The Russians do not have the military might of the United States, if they ever did. But they are clever, and they have their own problem with terrorism at home. They will make an excellent stand-in until we have a president in office who is up to the job of wielding power responsibly, hopefully in 2017. Yet, if the angry women and the clueless college students have their way, we may have to wait until 2021.

In the last few weeks we have learned that bluster does not make for an effective foreign policy. We have learned that America must not lay down red lines and then find itself tripped up by them. It does not threaten to fire off missiles, say at Syria, and then go home -- what Secretary Kerry called an "unbelievably small, limited kind of effort." It does not promise to aid Syrian rebels without knowing who those rebels are and whether they are capable of winning. For certain, America ought not to come to the aid of Syrian rebels that are going to be more hostile toward us than the present Syrian regime. In other words, we ought not "to lead from behind," as our president has been doing. That runs the danger of putting other countries in charge of our foreign policy, as we now have done.

What has been needed in the Middle East is a strategic design. As a result of the incompetence in the White House we have now seen the greatest botch in foreign policy in modern times. The president talked sweetly. Then he talked tough. Then he vowed to get the Congress to support an attack on Syria after which ... well, after which he gave no indication that he had any idea of what he was going to do. Thank God the Russians came in to help us out. They did this after the preposterous secretary of state inadvertently suggested to a reporter's question that Syria could save itself from an aerial attack by simply giving up its chemical weapons. His remark was off-the-cuff. Yet, at least President Putin's aides were listening. They conferred with Moscow, and in 24 hours our foreign policy was slipping into their hands. They already have much of our foreign intelligence eaves droppings thanks to the betrayal of Edward Snowden, so they are well versed on the intricacies of our policies. We can expect them to act "prudently."

How the Highland Park Shooter Reportedly Obtained His Guns Is Beyond Ridiculous
Townhall
Parolee worried he could be jailed if late for work confronts climate activists for blocking Beltway traffic, is promptly arrested for his troubles [videos]
Twitchy
Mayra Flores Is Already Making All the Right People Mad
Redstate
The Morning Briefing: LOL, Trump Is Still the Democrats' Daddy
PJ Media