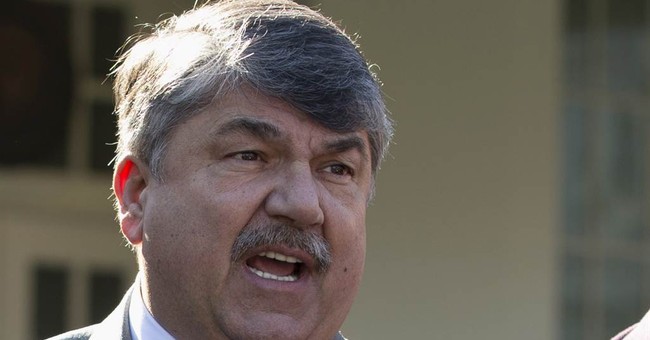 WASHINGTON -- Avert your gaze! Show some respect for the deeply troubled. Richard Trumka, the portly president of the AFL-CIO, has come forward with a pathetic acknowledgment of organized labor's weakened condition, and I suggest compassion. In fact, his proposal suggests the moribund condition of the American left, and I urge a dignified silence.

From the mainstream media we only hear of the squabbling among organizations on the right. Supposedly the tea party is running rampant. The other conservatives groups are unruly. The Republican Party is victimized by just about everyone. Yet, of course, these elements of the Republican Party are growing elements. They have come from relative obscurity to sudden political prominence. Trumka, on the other hand, is holding together a dying organization, and he is suggesting agglutinating it with other organizations of the left that are not doing so very well themselves. His great idea is to include such collections of oddballs as the members of the Sierra Club, the National Organization for Women and the Bird Watchers of America into the AFL-CIO. It is an idea born of desperation.

There was a day when the AFL-CIO was enormously powerful. Back when George Meany and Lane Kirkland headed the AFL-CIO the unions accounted for over 30 percent of the labor force and they would not think of allying with with the likes of the Sierra Club or the National Organization for Women. After all, Meany and Kirkland's unions actually manufactured goods and offered services. Yet times have been tough. In 2012 the unions accounted for only 6.6 percent of the private-sector workforce. With public-sector unions making up 36 percent of government workers at the local, state and federal level the other unions get a boost, but that boost only puts union membership at 11 percent of the workforce. So here is Trumka's bright idea.

He will extend the AFL-CIO to include all members of the "progressive" movement whether they work or not, whether they are bird watchers or angry women, whatever. On Sept. 9 the AFL-CIO settled for a resolution only to accept working "hand in hand with community partners and allies," but Trumka envisions a wider membership in the future. "We must begin, here, and now, today, the great work of reawakening a movement of working people not just all the people in this hall," he told the AFL-CIO's quadrennial convention. Whatever they do. He tried to bring the NAACP, the Sierra Club and the National Council of La Raza into some sort of alliance with him at the meeting, but some leaders of lesser unions objected.

Doubtless Trumka will try again. He sees the future of the AFL-CIO as including every worker, along with every feminist, all environmentalists and the zanies at MoveOn.org who already outnumber his workers in the private-sector unions by one million. There may be some bumps on the road ahead, for instance, when the United Mine Workers of America's 75,000 workers have to join with the Sierra Club whose 1.4 million members believe that coal power is "an outdated, backward and dirty 19th-century technology." Yet Trumka will persist.