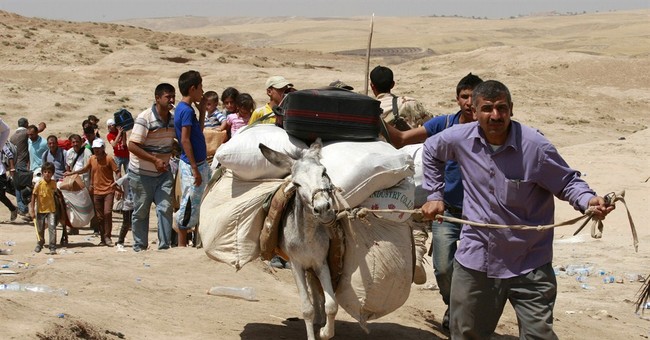 Trending
WASHINGTON -- Maybe Prime Minister Nuri Kamal al-Maliki of Iraq should not have been in such a hurry to bid American troops adieu as he was back in 2007. What is more, maybe President Barack Obama should have come up with a few more compelling proposals for American troops to stay in Iraq for a few more years. After all, we did expend all that blood and treasure in getting the Sunni and the Shiite to live together peacefully -- no car bombs, no suicide bombers. I think Prime Minister Maliki would agree with me. Iraq was a relatively peaceful place to live when there were American troops stationed nearby.

Now the place sounds hideous. Certainly you would not want to be a tourist agent in Baghdad. What would be your most fetching sights, a cafe that recently hosted a Kia minivan that exploded, or a Kia minivan that went up in flames in front of a theater? Kia minivans, apparently, are the vehicles of choice for roadside bombs, cars that suddenly go boom in an otherwise quiet neighborhood. Maybe the tourist guide could take his clients to a Kia showroom.

Back in early 2007, President George W. Bush ordered the surge. At the time Majority Leader Senator Harry Reid was pronouncing: "This war is lost and the surge is not accomplishing anything." Nonetheless, Bush endured. Following General David Petraeus' plan he sent in some 20,000 additional troops to weed out the roadside bombers and pacify the militias. In a matter of months the slaughter of civilians had ended. Sunni militias were becoming agents of peace, not mindless slaughter, and Iraq was becoming a peaceful country.

Then Maliki and Obama bungled the peace treaty. American troops were unceremoniously asked to leave the country. Washington put the best face possible on it and now what have you? Incipient chaos! I think in all of American history we have had no more ungrateful allies than the Iraqis under Prime Minister Nuri Kamal al-Maliki, who is now holed up behind cement walls in the Green Zone guarded by tanks and armor. The fortified Green Zone is one last gift from the vanishing American army.

A week ago on Saturday, there was a horrid attack in Iraq. It was preceded by a text message from Maliki to his citizenry's cell phones. Have a happy Id al-Fitr, he wrote from his fortified post. Enjoy the "security, stability and prosperity" Iraq was luxuriating in on this feast at the end of Ramadan. Then kaboom, kaboom -- the bombs went off. A few hours latter a spokesman for the Ministry of Interior, one Saad Maan, appeared on state television to assure the populace that not much harm had been done. He congratulated the security forces, lamenting that one soldier had been killed defusing a bomb and expressing the government's sympathies for the other sole civilian casualty. Yet otherwise everything was OK.

Or was it? Actually, hours later, it was reported by news sources that three-dozen people were killed and more that 100 were injured. Iraqis laughed cynically and compared Maan to Baghdad Bob, the information minister during Saddam Hussein's last days, who, as the American Army rolled into Baghdad, kept telling the world that Saddam's armed forces were making minced meat out of the Americans.

The problem in Iraq is that the Shiite majority and the Sunni minority hate each other. Just when the Americans were getting them to live peacefully together, the Americans were ordered out of the country and our President went along with it. Now al-Qaida in Iraq is bombing the Shiites, stirring up the security forces against the Sunnis, and the whole country is headed for a civil war.

I return to my thesis on the Middle East that has held for forty years. Some critics complain that if the Israelis would be more accommodating, the Middle East would be a happy land. I say if there were no Israel there still would be blood flowing in the Middle East. Consider conditions in Egypt, Libya, Lebanon, Syria and now Iraq. Israel is the only peaceful, prosperous, free democracy out there. Maybe Iraq could send a delegation of Sunnis and Shiites to Israel to see how it is done.