Testimonial to a Great American 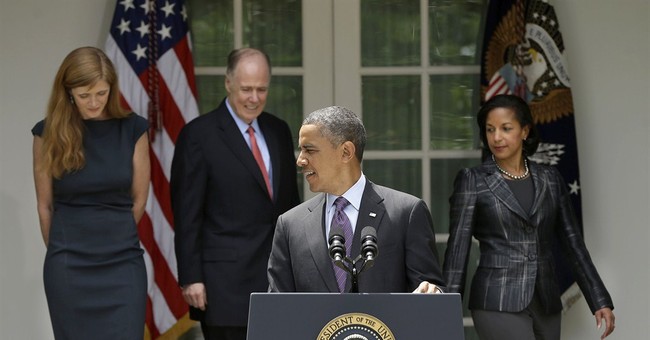 POSITANO, Italy -- I am in Positano, Italy, on the Tyrrhenian Sea, soaking up the sun and pondering the immensities. Pompeii is just down the road, or over the mountain, or somewhere nearby, and it seems to me that Pompeii is the future for America if things continue under Barack the Pitiable, not Rome as the left-wingers and the right-wingers seem to have agreed upon. Pompeii went out in a cataclysm. Rome gently declined with a few massacres and plunderings as sad punctuation marks.

Yet 2014 is just around the corner and quite possibly the beginning of the end for Barack the Pitiable, if the independent voters have their way and temperamental conservatives turn out to vote. It was the temperamental conservatives who stayed home in 2012, when President Obama won four million fewer votes than in 2008. I have called the left-wing electorate who believe all the fanciful claptrap of the left-wing demagogues -- the environmental apocalypse, the feminist apocalypse and so forth -- the moron vote. What do we call the temperamental right-wingers who abstain from voting if their conservative candidate is not tailored to their every preference? That vote has got to be the idiot vote.

Allow me to pass on to more pleasant subjects, namely, a monumental event solemnized by the Americanologist, Taki. I am also editing the next issue of the The American Spectator from Positano, and Taki has, with many scholarly notations, just sent in his reflections on a colossal event. Babs, as he calls her, has announced retirement.

He calls it a "stop-the-presses moment," the day Barbara Wawa announced her retirement from television, after about a century of appearances on the flickering screen with President Bill Clinton, Pee Wee Herman, President Anwar Sadat, every Kennedy ever heard of, most Bushes, half of Hollywood and so many others. Barbara Wawa is actually Barbara Walters. She was given, Taki tells us, the moniker Wawa by a fellow named Michael Thomas for some obscure reasons. The portrait Taki paints of her is not mean spirited. In fact it is rather gentle, even melancholy. He met her 59 years ago, when he was but 16 and accompanying an older Greek friend -- both were Greek nationals of considerable inherited wealth -- to meet a young girl, Babs as it turned out, in Miami Beach. His friend did not see her again for 38 years, when he visited the Barcelona Olympics, and she was seated in the royal box of Spain's King Juan Carlos. By then Barbara had made it. She was the most famous woman on television and she bridged two worlds, the world news and celebrity news. Under her they coalesced. So that now an utter idiot like Justin Bieber is confused with a president or a poet in the public mind.

Barbara did it with a formula of soft banal questions and "niceness." Taki remembers her asking Katharine Hepburn "what kind of a tree she would have liked to be had she been a tree." It struck Miss Hepburn, says Taki, "like a thunderbolt." I wish he had recalled what kind of questions Barbara had asked Monica Lewinsky or President Sadat or Alfred Einstein -- if she ever interviewed him. She might have. Did she ask him the tree question? Under her influence, America's news gatherers sweep up the justly renowned, the newsworthy, the celebrated and the freaks. |"The insatiable hunger for fame and celebrity that American has suffered from since the 1960s," writes Taki, "can be traced to her rise." Give her credit. She was historic.

I remember my own early acquaintanceship with her. I was part of a group of journalists that dined occasionally in the late 1970s and early 1980s. Barbara was there with Walter Cronkite and such print journalists as Bill Safire from the New York Times. Usually she was accompanied by an executive from her network. What was it, ABC? CBS? At any rate, the business guy would accost us at every dinner with some banal event that Barbara had provoked on screen recently and marvel at its singularity. "Did you see her ask so and so what specimen of tree or of an avocado he might be?" -- my mind spins visions.

The last time I saw her, we were at a great dinner hosted by Vice President George H. W. Bush for, I think, Shimon Peres. I arrived at the reception a bit late and everyone was going in except Mort Zuckerman, the publishing mogul, and a very nice woman who Mort introduced me to. I apologized. I did not get her name. She enunciated it again and at least one more time. It was Barbara from our journalists' suppers but with a different face. She had apparently had work done, and I was unaware of the new Barbara. She never talked to me again.