Government Giveth and Taketh Away 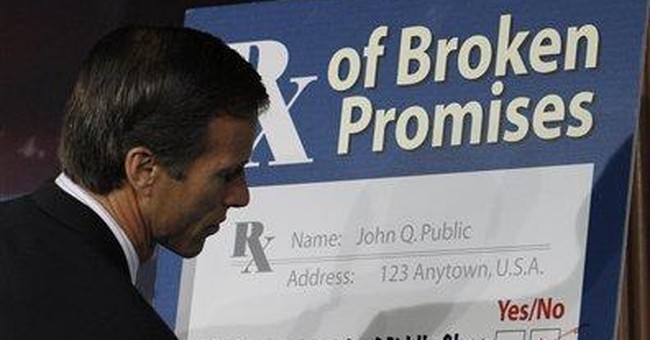 WASHINGTON -- Do my eyes deceive me? Did I really see President Barack Obama this week calling for a vast increase in government spending? He is promising to "spend our way out of this recession." He plans to build highways and bridges. There will be tax cuts for small businesses. There will be tax incentives for making our homes more energy-efficient. Economic stimulus will be extended for unemployment insurance. Checks for $250 will be sent to senior citizens and veterans. More money will be sent to state and local governments so they will not have to lay off teachers, firefighters and police. It is estimated that the president's eruption of generosity will cost an additional $170 billion, perhaps more.

He has made this promise despite the fact that fear is spreading throughout the country that our government deficits are unsustainable. The so-called independents have forsaken him, owing to their fear that he is bankrupting the country. For that matter, he has expressed the same fear ... half a year ago.

Yes, this generosity comes from the same president who told a C-SPAN interviewer last spring that "we are out of money." That grim revelation came from President Obama in response to this observation by the interviewer: "You know the numbers, $1.7 trillion debt, a national deficit of $11 trillion. At what point do we run out of money?" The president's response was: "Well, we're out of money now. We're operating in deep deficits."

About the time the president announced that this nation -- which is "out of money" -- is going to "spend our way out of this recession," the Gallup Poll spoke. According to it, the president's approval rating is lower than that of any of his predecessors at this point in their presidencies, and few came in with President Obama's high favorable ratings. Today he polls at 47 percent, down from 53 percent last month. A wit at the Los Angeles Times notes that the pulchritudinous former Alaska Gov. Sarah Palin is now within a point of the president in popularity.

When Medicare first was passed, it was understood that government would stand aside from the relations that a patient has with a doctor. Supposedly, these relations always would be a private matter between the doctor and the patient, free of government interference. Yet on Page 146 of the Senate's version of health care reform, it is clearly written that once the bill is passed, insurance plans certified by the government can only pay the fees of a doctor who "implements such mechanisms to improve health care quality as the Secretary (of Health and Human Services) may by regulation require." In plain English, henceforth government not only will intervene between doctors and patients but also will control that relationship.