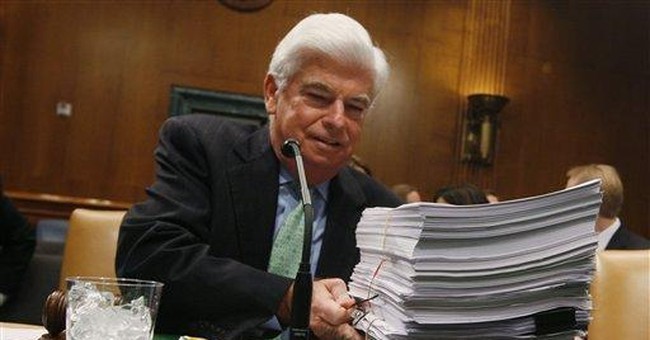 WASHINGTON -- If you have any sense that you may be getting sick in the years ahead, I suggest you get sick immediately. If you will be in need of surgery or any other medical procedure, do it now! If not immediately, be certain that you hand yourself over to the health care professionals before Oct. 15 of this year. That is the date on which President Barack Obama hopes to sign his health care bill once it has gone through the congressional baloney grinder.

At the heart of President Obama's plan is his stated goal to cut medical costs. That might sound good to you, but it means cutting services, nurses, technicians, medical tests and, most prominently, the use of expensive technology. The president's top medical advisers are quite frank about this. Dr. Ezekiel Emanuel, brother of Rahm Emanuel and a health policy adviser in the Office of Management and Budget, has chided Americans for the expense of their being "enamored with technology." Dr. David Blumenthal, another key Obama adviser, charges medical innovations as being responsible for fully two-thirds of the annual increase in health care spending. Their solution is to limit expensive innovations. A 2008 Congressional Budget Office report agrees with their cost analysis but concludes happily that such innovations "permit the treatment of previously untreatable conditions." As I shall show, there are more humane ways to cut health care costs.

Also at the heart of President Obama's plan is the restriction of services for people 65 and older, who by virtue of modern medicine may actually be 10 to 15 years younger in terms of good health than they would have been a generation ago. Alas, they still have higher health risks and costs than younger people. Thus, they are going to bear the brunt of the Obama administration's cost cuts, for 27 to 30 percent of Medicaid spending is spent for caring for people at the ends of their lives. With the government taking over more of the nation's health care costs under the Obama regime, it already has been decided that government monies are spent more economically on younger people than on older people. If a 65-year-old needs the cost of a hip replacement covered, the government will say it would better spend that money on a younger person, whose hip will last longer. Or perhaps the government will decide the money is better spent on preventive medicine for younger people.

Yet the policy remained in the bill, along with requirements for doctors' offices and hospitals to maintain databanks on patients while creating a national network to monitor patients' care. The good side of that is that a central database can send out the latest information on treatments, though doctors who keep up with their medical journals already know about these treatments. The dark side is that it will allow the federal government to control how our doctors treat us. The bill speaks of "appropriate" and "cost-effective" care and provides penalties against doctors, beginning in 2014. Now there is an Orwellian twist to the Obama promise of "hope" and "change."

As Betsy McCaughey has written in a groundbreaking analysis of the Obama health care proposals, Draconian cost-control measures are not the answer to health care reform, and they are based on erroneous data. Health care's spending increases over the past five years have been about half what they were in the recent period before that. Average family spending on food, energy and health care has remained the same for decades. Moreover, contrary to myth, there are not 47 million uninsured Americans, but actually about 22 million. Rather than pass a health care reform that mercilessly would limit health care to older citizens (and to chronically ill citizens) while still increasing federal expenditures by at least a trillion dollars, she suggests a modest reform, to wit, debit cards for the uninsured and the needy.

Appearing in a recent installment of Spectator.org, McCaughey wrote, "Providing sliding scale assistance, based on household income, to families to purchase … coverage would cost $20 to $25 billion a year." That is one reform that would deal with our present problems. There are others, which I shall take up in later columns. What we do not need is Orwell's Big Brother overseeing the rationing of health care to senior citizens, particularly senior citizens with years of life ahead of them.