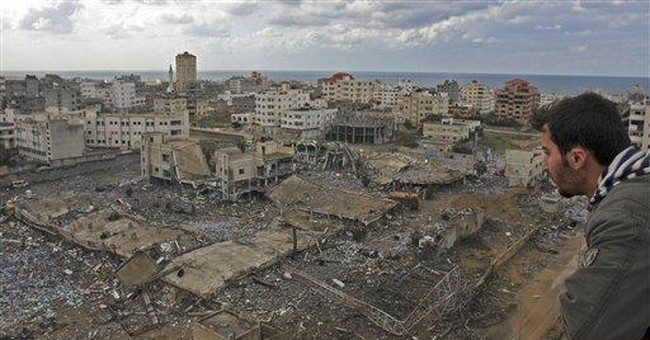 WASHINGTON, D.C. -- Does anyone know the name of the National Public Radio interviewer who was so disdainful of Israel's ambassador to the United States on the morning of Dec. 31? I missed his name. I would like to give him an award for sarcasm, rudeness and, well, controlled rage. Maybe he would accept my shoes.

The interviewer is perhaps a graduate of one of our country's esteemed anger management centers. Very theatrically, he cut the Israeli ambassador off in the midst of the ambassador's variations on the theme of peace and goodwill and that sort of thing.

I wonder what made the NPR catastrophist so angry. I can understand the professional journalist suffering some mild pique. The ambassador obviously was not giving him the answers he sought. Yet this fellow was downright contemptuous. To employ a word currently in fashion, I would say his response to the Israeli ambassador was disproportional.

It is dreadful that Gaza, one of the most densely populated places on earth, is under heavy aerial bombardment from Israel. Yet Hamas, the governing entity in Gaza, has been lobbing shrapnel-filled missiles into Israel on a regular basis for months. Two weeks ago, Hamas arbitrarily broke its six-month ceasefire with Israel, and the danger to Israeli life and property has gotten worse. How many missiles is Israel to suffer before it is warranted to defend its territory and its people?

Now that word "disproportional" is being raised among foreign policy elites. Israeli air strikes since Saturday have killed several hundred Palestinians and injured several thousand. So we are hearing that the Israeli actions are "disproportional."

I can almost imagine a learned seminar being convened here in Washington wherein the assembled gogues excogitate precisely how many incoming Hamas missiles will warrant one air strike or more. And how will these advocates of proportionality factor in the targets of the Israeli air strikes?

It is tragic that Palestinian civilians are dying, but Hamas locates its military installations and administrative facilities in civilian areas precisely to dissuade Israel from attacking Hamas as it insouciantly bombards Israel, its soldiers and, more frequently, its civilians.

A couple of decades back, I wrote that the Palestinian terrorists -- and Hamas is a fully accredited terrorist group -- were the only fighters I knew of that target civilians rather than soldiers. That was pretty much true back then. Yet as terrorist organizations have proliferated, the targeting solely of civilians has become widespread throughout the world. Now apparently the civilized world has become accustomed to this outrage. Yet it is to Israel's credit that it remains outraged by a terrorist group that would target noncombatants for strategic purposes.

I have no idea how many Hamas strikes against civilians warrant how many Israeli acts of retribution. Frankly, such calculations seem to me as beside the point. The real question is how many Israeli strikes are needed to close down Hamas? That is what is necessary. The Israelis have at their border a violent, unprincipled enemy that has vowed to destroy Israel. Hamas not only vows to destroy Israel, it bombards Israel and expects the world to object when Israel counterattacks.

Now that strikes me as irrational. Hamas should accept the consequences of its assaults on Israel. Hamas might even renew the ceasefire that it broke. For that matter, Hamas might end its war against Israel. I doubt the Israelis would object.