Clinton and I at Georgetown 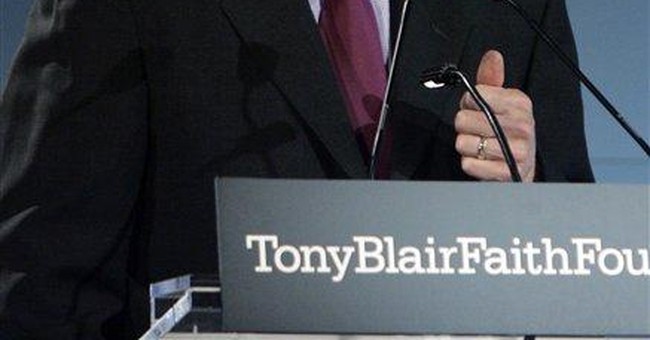 LONDON -- I am in London preparing a couple of talks on politics that I am to give this week, and I have made a very unhappy discovery. A new book, written by a promising young American historian, reveals a secret about Bill Clinton and me that we have kept from the public for four decades. In "The Pact," a book that follows the strikingly similar careers of Bill Clinton and Newt Gingrich, Steven M. Gillon reveals that Bill and I attended Georgetown University together as undergraduates. Drat, our secret is out!

This is how the historian puts it: "Emmett Tyrell (sic), a contemporary at Georgetown and later conservative pundit, referred to Clinton as 'a student government goody-goody.'" Well, who doubts that he was? I remember Bill well, tooling around campus in a late-model convertible (a Buick, if I recall), always ready with a smile and a hearty ho-ho -- especially for the girls. Incidentally, it is completely untrue that Bill's youth was impoverished, and in his autobiography, he admits as much, adding that the born-in-a-log-cabin myth is always a sure vote-getter.

Back at Georgetown, Bill had a quick mind but rarely got assignments done on time and probably used crib sheets or Cliffs Notes to finish his course work. He spread himself pretty thin on campus in those days. Even then, Bill was an inveterate Casanova, which is in part the reason for our covenant of silence. Whenever he tried to seduce one of my girlfriends, the girls and I had a good laugh. They called him Tubby; even then, he had weight problems. Also, he could not stop talking. Most college girls in those days inclined toward the tall, silent type. Bill was tall, taller than I am, but he was a gasbag. The girls and I used to joke about Bill's loquacity. Did he ever shut down even while attempting love? The girls doubted it and kept their distance.

My only regret through the years is that Georgetown never has acknowledged my presence on campus and the amicable relations I had with Bill. After all, I founded The American Spectator during my student days. Years later, in 1993, the Spectator published the first Troopergate story that set in motion the long and painful process leading to Bill's impeachment, and of course, the magazine published many other stories on Bill: his troubled real estate dealings, his chaotic and corrupt White House, his cheating on the golf course, and more. One would think someone would take notice of the irony that back at old Georgetown, we were fellow students and friendly rivals, though I never took a class with him and never saw him in the gym.

Actually, Gillon's book is not the first time that our shared experience at the university has been reported. The story originated in the historian Nigel Hamilton's biography "Bill Clinton: An American Journey." It was a rather good book but marred by so many errors that very few intellectuals took it seriously. Unfortunately, Gillon does. In his footnotes, he cites Hamilton's opuscule as the source for his claim that I attended Georgetown with Bill. Hamilton has a second volume out now, "Bill Clinton: Mastering the Presidency." It is even more error-ridden. In that book, Hamilton claims that I told David Brock, the Troopergate writer, that I would pay his sources, the Arkansas state troopers, "anything they asked." There is no truth to that claim. Hamilton offers no evidence to support it. And serious historians among my friends here in London think I should sue Hamilton.

A problem that historians are having in chronicling the lives of both Clintons is that for 40 years or more, the Clintons sedulously have deposited thousands of discrepancies on the public record. In a word, they have lied. Many of the lies have endured for so long unchallenged -- or challenged only by an audacious few whose reputations were blackened immediately -- that the lies have become commonplace facts of the Clinton saga. Thus, we forever hear about Bill's impoverished youth, though his family owned automobile dealerships in Arkansas and he now admits to exaggerating his early poverty. Or we still hear of what a political genius he is, though all he ever has managed is re-election for himself, while his party's power faded. In power, he never has gotten much done, and when he campaigns for others, they lose. In 2004, he campaigned for 14 Democratic office seekers. Twelve lost. In 2008, he campaigned for a famous front-runner whose nomination was deemed "inevitable." She lost.

Now poor Gillon is fouling up the record, spreading Clinton myths that will make the work of future historians nearly impossible. On Page 112, he writes, "The American Spectator published a series of articles, mostly untrue, about the president's promiscuous sex life and shady business practices." None of the allegedly untrue articles is mentioned because there has been none. In fact, I doubt Gillon has any familiarity with the magazine. He simply stumbled across this defamation of the magazine's reportage somewhere and incuriously accepted it. I am glad he never read Terry McAuliffe's mendacious autobiography. McAuliffe maintains that the Spectator published articles claiming Clinton ordered the murder of opponents. He never has been able to cite those articles to me because they do not exist.

In researching the lives of the Clintons, let the researcher beware. I wonder how that is translated into Latin.