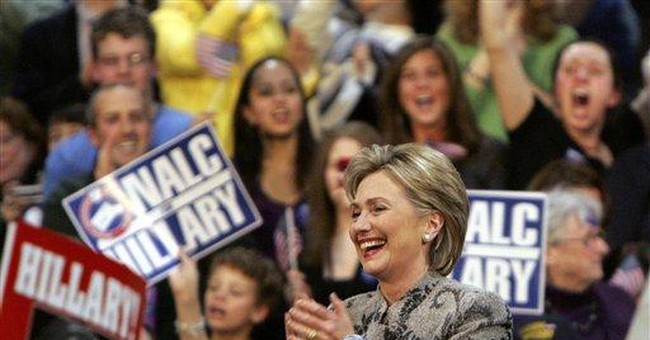 WASHINGTON -- Stepping back from the febrile blare that the political classes have orchestrated around the Iowa caucuses and now the New Hampshire primary, allow me to make an observation that some will say is lacking in humility. Well, to be honest, of all the virtues, humility is the one that I simply cannot stick. I mean, what is the point of it? Now that we have two presidential contests behind us and the Clintons thrashing to maintain a one-digit lead nationally over Sen. Barack Obama -- where only a couple of weeks back, the lead was in the double digits -- it appears that I have been right for months. We are in the midst of a Clinton crack-up.

If I do say so myself, I was right on the money when I titled my latest book on the Clintons' journey, from their disgrace in 2001 to their vicissitudes in Campaign '08, "The Clinton Crack-Up." In New Hampshire, Hillary saw a double-digit lead over Obama steadily wither to a two-point victory over him, and a shabby victory it was. She saw her husband flaying about, whining at media coverage, referring to Obama's impressive rise to national prominence as a "fairy tale" and his presidency as a "rolling of the dice." Her campaign staff began to buckle. The New York Times reported the former Boy President was increasingly a soporific on the stump, and USA Today called him a "relic." Hillary was reduced to tears just before the balloting began.

By election day in New Hampshire, large segments of the liberal political class, both in the media and in the Democratic Party, were betraying an enthusiasm for an end to the Clinton dynasty that surprised even me. Admittedly, I had predicted much of this impatience with the Clintons in my book. There in the last chapter, I mused that a rising generation of young Democrats finally is going to overthrow the 1960s generation's domination of the party, and in New Hampshire -- as was the case in Iowa, also -- the youth vote went for Obama. I also pointed out that, though Bill Clinton has been an effective campaigner for himself, he is usually ineffective in campaigning for others. In 2004, 12 of the 14 candidates whom he campaigned for lost.

Finally there is the matter of the Clintons' unpopularity. The Episodic Apologists of the media rhapsodize on the Clintons' "rock star" popularity, but who wants a rock star in the White House? Truth be known, as a politician, Hillary is manifestly unpopular. Anywhere from 40 percent to 50 percent of the electorate when polled say they never will vote for her. Even when she was first lady, she was unpopular. In fact, in researching her for my book, I found that she was the most unpopular first lady since polling this question began.

Another fact that I turned up in researching for the book is a matter alluded to earlier in this column, to wit, the Clintons began their quest for a second Clinton presidency from a position of national disgrace. Owing to the last-minute pardons, the White House property that the first family was accused of pilfering and the trashing of the White House alleged against Hillary's staff, both Clintons' approval ratings had slipped into the 30th percentile. Major liberal newspapers were demanding congressional investigations, including The New York Times. The liberal New York Observer editorialized "we (New Yorkers) have made a terrible mistake, for Hillary Rodham Clinton is unfit for elective office. Had she any shame, she would resign."

Now that last line caught your eye, did it not? The reason for the dramatic decline in Hillary's front-runner status is that Democratic voters increasingly are alarmed about a large hairy monster that has been roaming through their consciences for years, probably since they first heard of Gennifer Flowers and of Bill Clinton's diplomatic negotiations with his draft board. The monster is the Clintons' record of lawlessness and scandal. Already in this campaign cycle, Democratic voters have reminders of the Clintons' unsavory practices, felons among their contributors, even shadowy Asians bundling checks, as in 1996, and, of course, the politics of personal destruction practiced against their opponents.

My guess is that a sizable number of Democrats have had enough of it. Obama represents a clean break with a troubled and mediocre past. As Hillary leaves New Hampshire, she challenges Obama on the question of experience. The junior senator from Illinois should take up her challenge. Hillary can chide him for his lack of experience, and he can remind us all of Hillary's unique experiences, beginning with the Clintons' "holiday from history," and Travelgate, Filegate, missing billing records, lying under oath, her cattle-futures bonanza, the Riady family, Johnny Chung, John Huang, Charlie Trie -- and suddenly, you see it, too, the large hairy monster that is the Clinton legacy.

My guess is that the main reason for Hillary's decline is that voters are troubled by the monster that is her unique record.