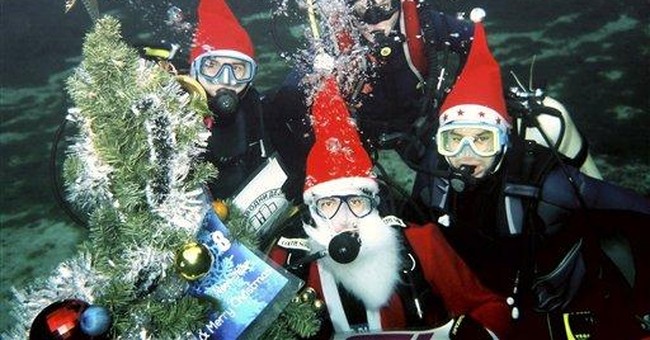 WASHINGTON -- Christmas is over, and fortunately no one was hurt. Every year, it seems the holiday becomes more divisive, which seems odd. More than 80 percent of our fellow Americans consider the holiday a holy day, the day on which Jesus was born. It is supposed to be a time of peace. Yet for many years now, it has become a time for wrangling over what decorative symbols are allowed in what public settings.

I have followed these disputes assiduously and watched an ever-wider array of Christmas decorations become malum prohibitum. At first, it was the Nativity scene, the traditional envisagement of the site of Jesus' birth: a straw-strewn stable, Mary and Joseph looking prayerfully into a primitive crib wherein the divine infant lies, face beaming out, hands raised up, palms upward. There are barnyard animals about. Possibly an angel is overhead, and the shepherds and three kings mentioned in Scripture have arrived.

I actually doubt that more than a tiny minority of non-Christians found these scenes irritating or alarming. Actually -- and bearing in mind the almost limitless capacity of mankind to complain -- I would guess that for every non-Christian who took offense at a Nativity scene, there were Christians, too, who took offense. For instance, there might be Christian pedants offended by historical inaccuracies in the scene. There also might be an occasional Christian siding with the separation-of-church-and-state rigorists and equally fearful that a Nativity scene on public property puts the nation on a slippery slope to theocracy. As a consequence of all these complainants, the once-unexceptional Nativity scene has become X-rated.

Other traditional Christmas decorations are on the way out, too, though their religious content is often nil. We all can understand why angels might be controversial. But increasingly, Rudolph the red-nosed reindeer has been the subject of disputes, and Santa Claus, too. I was in Chicago a week or two before Christmas and found that these time-honored Christmas symbols have been replaced by tin soldiers, Raggedy Ann dolls and mysterious conical trees covered with colored lights. In three days, I saw not one Rudolph and only an occasional Santa. Yet I spied an infinitude of these idiotic trees, Raggedy Ann dolls and tin soldiers. Ever the provocateur, I feigned mild indignation over a squad of tin soldiers deployed in the lobby of a posh hotel. The concierge deferred to me immediately, tremulous with alarm. I suspect he feared that I might be a member of America's powerful anti-war movement, ready to charge him with militarizing "the holidays."

Evidence of how controversial Christmas has become can be seen by comparing two votes in the House of Representatives: the October vote to recognize the importance of Ramadan and the December vote to recognize the importance of Christmas. The House resolution on Ramadan sailed through 376-0. The resolution on Christmas got 372 votes, but nine Democrats opposed the measure, though most had favored Ramadan earlier. Ten Democrats only voted "present," and 40 failed to vote either way. Possibly they were shopping.

Doubtless the opponents of Christmas are moved by various discrete motives. Some are bigots or cranks. Some are truly alarmed by Christian fervor in the dead of winter. To be sure, some probably do fear that signs of any religion will put us on a slippery slope to theocracy. But I also see another motive, a motive that has animated the most egregious public nuisances at large in recent American history: the liberal activist.

The liberal activist aspires to be an agent of "progress." In fact, the liberal activist, whether male or female, often calls himself a progressive. Yet through the years, you will spot no coherent system of political values motivating liberal reforms. Sometimes the liberals might be motivated by liberty or equality or fraternity, but sometimes they are not. They may be against censorship, but sometimes dirty words offend the feminists among them, and ethnic slurs arouse other co-conspirators.

There is, however, one political value that can be discerned motivating every one of their legendary reforms, from the ambitious (world peace) to the trivial (the criminalization of trans fats). That value is to disturb one's neighbor, to disturb the peace. In all civilized criminal codes, such behavior constitutes a misdemeanor. Yet it is at the heart of the liberal project.

Disturbing the peace is, I believe, at the heart of rendering Christmas controversial. Surely disturbing the peace was the motive on the House floor when Ramadan and Christmas came to a vote. All the opponents of Christmas were liberals. Their adolescent complaint denies all Americans the opportunity to contemplate peacefully what is conceivably Western civilization's greatest event.