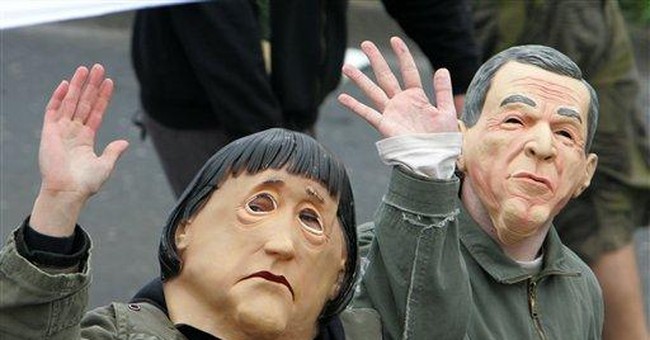 WASHINGTON -- For longer than three decades now, thoughtful Americans have lived in wonder at the enduring spectacle of the environmentalist. How, these thoughtful Americans ask, can a group of people continue to fetch the attention of the nation after being so thunderously in error year after year? "The end is nigh," our environmental Jeremiahs have told us over and again. Yet over and again, when nigh arrives, it generally arrives very decorously and passes uneventfully. Does the environmentalist's failed prophecy send him off into history's dustbin along with other failed prophets such as the Shakers (officially known as the Millennial Church), the nudists (there have been various denominations) or the grumpy members of the Communist Party of the United States? Not at all. The environmentalist merely sets another date for our ecological doom and returns to his soapbox.

Actually, as you probably have observed, the catastrophes predicted by our environmentalists usually are followed by their precise opposites. In the 1960s, overpopulation was prophesied. Today the civilized world is confronted by underpopulation. In the late 1960s, the celebrated pessimist, Dr. Paul Ehrlich, prophesied world famine. His faithful followers wore buttons on their chests and stickers on their bumpers proclaiming "Famine '75." The anticipated famine never arrived, and advances in agriculture have made the yield of a modern acre of farmland bountiful beyond anything gloomy Paul had extrapolated. Today we endure predictions of an impending global warming; and, as our amused skeptics delight in informing us, the environmentalists of yesteryear predicted just the opposite: global cooling.

Still, what if, for a change, the environmentalists are accurate in their hysteria? What if our reliance on fossil fuel is going to turn the world into a giant sauna bath? Face up to it: A sauna bath is not a fit place to bring up children. As the Earth gets warmer, our fellow Americans could begin to shed even more of their clothing than they do during the summer now. Frankly, in this season of shorts and tank tops, I have seen enough flab. The naked midriff is a fashion that I find distinctly anaphrodisiacal. Most American anatomies, obese or otherwise, are best left covered. On that I am in agreement with the Rev. Mullahs, though for different reasons.

From all I have been able to discern, the environmentalists' preferred tactic for reducing fossil fuel is to reduce our reliance on the automobile. They advise more reliance on mass transportation, which strikes me as hypocritical. Most environmentalists would be decidedly uncomfortable traveling with the rest of us in public conveyances. Given the fact that riding subways, buses and trains means constant close contact with one's fellow Americans, the average environmentalist will become even more irritable than usual. There must be other environmentally friendly vehicles in America's atmospherically salubrious future, vehicles that will allow environmentalists and ordinary Americans their "space," as the phrase has it.

We know environmentalists often ride bicycles, and I can see why bicycles suit them. The bicyclist is the exalte of the road. The bicyclist is neither a pedestrian nor a driver. He cycles where he damn well wants to, on the sidewalk or on the street. He flashes by with his posterior in the air. Neither stop signs nor speed limits impede him -- and he is environmentally beneficent. Automobiles have to give him a wide berth, and pedestrians leap aside as he pedals past. Environmentalists adore bicycles.

So the bicycle seems to be the ultimate green vehicle. Doubtless you will be seeing more of them, despite their limited capacity for bearing bossy bumper stickers. In the present presidential campaign, do not be surprised if the Democratic candidates eventually conduct their campaigns from a bicycle. Bill and Hillary probably will be seen on a bicycle built for two -- Hillary on the front seat, Bill on the back, where his eyes will be free to wander.

Yet I have still another environmentally friendly vehicle to commend to our Democratic friends. Consider the pogo stick. It certainly would keep the candidates in the news. It is as independent of fossil fuel as the bicycle and frankly a hell of a lot of fun. Hillary would be a tremendous hit on a pogo stick, and all the other candidates would follow dutifully. It would put bounce into their campaigns. The Secret Service might fear for the effectiveness of its officers, but what the hell. We are talking about preventing an environmental nightmare. I pass on.