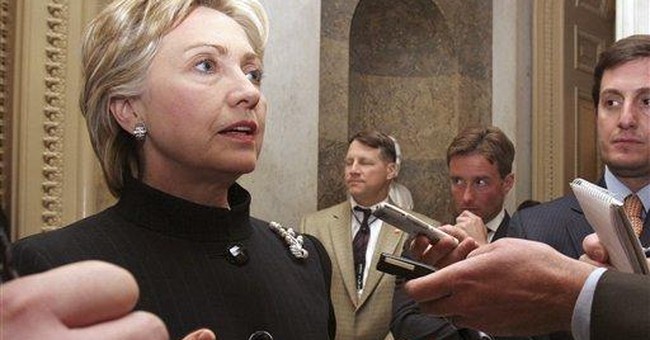 WASHINGTON, D.C. -- It looks like a death wish to me. The Democrats' recent all-night debate to confect legislation for pulling our troops out of Iraq immediately if not sooner suggests that they are, en masse, afflicted with a death wish -- and if their retreat gets more of our troops killed while transforming Iraq into bloody anarchy, they do not seem to care.

Hysteria has seized them. Not long ago most of them were prepared to give Gen. David Petraeus' new strategy a chance. After all, the Senate returned him to Iraq by an 81 to 0 vote. Now, the Democrats want the general to begin a retreat even before tendering his agreed-upon September report -- a death wish, I say.

The evidence is that the American people are watching this Congress and what they see they do not like. According to a recent Zogby poll, this Democrat-controlled Congress is now more unpopular than President George W. Bush, who, incidentally, will not be seeking re-election. Maybe many of these Democratic solons plan to retire, too.

What makes this all the more bizarre is that Petraeus' new strategy seems to be working. Anbar province was until recently a lost cause. Al-Qaida was having its way with the place. But its way was repellently brutal to local Iraqis, who increasingly saw al-Qaida as even more alien than the troops of the Coalition. About a year ago, local leaders in Anbar began siding with us, and now their fighters are working with our soldiers and the Iraqi army has sent al-Qaida packing. Ramadi, once an al-Qaida model for Sharia, is one of the safest cities in Iraq.

Part of the explanation is the savage brand of Sharia imposed by al-Qaida in Ramadi. It has also been imposed by al-Qaida in Diyala province. There, grisly torture chambers were discovered after our military liberated the province's major city, Baqubah. Local residents directed the Americans to a building where they found the instruments of torture. Nearby, corpses, many headless, were buried.

Diyala, not surprisingly, is going the way of Anbar. In recent weeks, our troops mounted a deadly operation against al-Qaida, killing hundreds and capturing more. As in Anbar, local sheiks have come to our side, recognizing that we will leave their province a lot faster than victorious al-Qaida, and we will leave their lands in relative freedom.

Once again, a catalyst for the sheiks' cooperation was al-Qaida's brand of Sharia. Al-Qaida had brought in foreign judges, called muftis. Their punishment of transgressions committed by local residents included murdering children, often with public beheadings. "Loose" morals were also punished.

For instance, if a local was caught carrying tomatoes in the same bag as cucumbers, the bearer of such a lewd mix would be beaten or worse.

On a more amusing note, al-Qaida's muftis also seem to share our progressives' disapproval of tobacco. Their punishment, however, is even harsher. Any resident of Diyala found smoking in public or even sporting nicotine stains had his or her offending fingers chopped off. Not even New York City Mayor Michael Bloomberg has gone that far.

Now comes word that early this month our troops captured Khaled Abdul-Fattah Dawoud al-Mashhadani -- Abu Shahid, for short. Embarrassingly for him, he was nabbed on July 4. According to Brigadier Gen. Kevin Bergner, he is "believed to be the most senior Iraqi in the al-Qaida in Iraq network."

Some of the muftis captured in Baqubah were fleeing the city hidden in women's traditional dress. I wonder what Abu Shahid was wearing. Would it be considered cruel punishment to inflict a bag of tomatoes and cucumbers on him? What would Sen. Harry Reid say?

So now we are back to the Democrat-controlled Congress. Are its members going to allow our troops to continue their work at least up to the earlier agreed-upon September report? It looks today as though the Republicans are going to force them to. And what will happen if that report finds things turning our way in Iraq?

I would not be surprised to see the Democrats saying they had predicted victory all along. There is something amusingly oblivious about them. They are like Don Quixote, though less good-natured.