Liberals and Conservatives for Libby 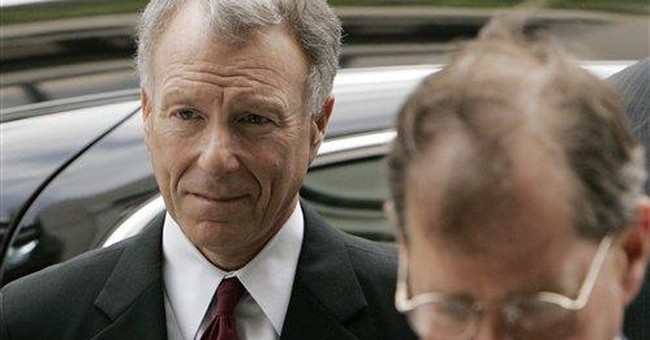 WASHINGTON -- I find myself in unusual company, and I am always so careful about the company I keep. Nonetheless, here I am arguing on the same side as Washington Post columnist and ritualistic liberal Richard Cohen and Christopher Hitchens. At least Hitchens, a columnist for Vanity Fair and Slate, is an independent man of the left. Yet here I am on their side, arguing for leniency for Vice President Dick Cheney's former chief of staff, Scooter Libby. Having been found guilty of lying under oath, he is about to be sent to prison before his appeal is considered. In fact, his prosecutor, Patrick Fitzgerald, has urged he be sent to prison immediately because of his failure to express remorse; though if he were to express remorse, what grounds would he have for an appeal? Fitzgerald is what is called a "tough" prosecutor. I would call him something else, either a failed logician or a brute.

While Libby's case was being shouted through the media and adjudicated in court, I thought I would simply abide by whatever the jury decided, notwithstanding my astonishment over a case that was in every respect a monstrosity. I have written that the case was a monstrosity, all the more so after it was reported that Fitzgerald had known all along that the suspected crime he was empowered to investigate was not a crime. Well, thought I, the jury will sort things out. Unfortunately the brute prevailed, faulty logic and all.

Now Cohen and Hitchens have raised serious questions of fairness and proportion. Lying under oath is destructive to legal proceedings and must not be permitted even by witnesses who are otherwise innocent. On this we all agree. Yet we doubt that Libby lied. In fact, I have long doubted that Libby is stupid enough to tell the particular lie that he has been found guilty of. It meant he lied about a long-ago telephone call with the journalist Tim Russert. What is more, it meant that Libby assumed Russert would somehow pick up on the lie and repeat it when asked about the conversation in court, thus making himself a perjurer. What actually happened is that Russert remembered the conversation differently, said so in court, and cooked Libby's goose. As Hitchens puts it, "If Scooter Libby goes to jail, it will be because he made a telephone call to Tim Russert and because Tim Russert has a different recollection of the conversation."

Libby's case came out of one of the most absurd news stories of recent memory. That was the buffoonish Joseph Wilson IV's claim that the White House sought to punish him for his anti-administration stand on weapons of mass destruction by illegally leaking his wife's identity as a covert CIA agent. Soon it was learned that Wilson had lied repeatedly. Next it transpired that his wife was not at the time a covert CIA agent. Finally, by now Fitzgerald had discovered that she was not covered by the law and that no crime had been committed. Yet confusion soon was discovered in Libby's testimony that could be interpreted as perjury. Now millions of dollars of legal expenses since, Libby is on his way to jail.

The case was a political scandal that left everyone appearing scandalous -- the White House, Wilson and his anti-war partisans and the press, particularly The New York Times. The Times called for the prosecutors to investigate the source of assumed White House leaks to the press. As a consequence, one journalist was jailed and others were threatened. The Times, in its partisan zeal against the Bush White House, actually managed to reduce freedom of the press and open a new avenue for government coercion of journalists. From the plagiarisms of Jayson Blair to this latest reckless partisanship, the Times continues to be its own worst enemy.

What is to be done? The president has the power to pardon, and he ought to pardon Libby. George W. Bush is, as I have observed him, a tough-minded man of conscience. Surely he recognizes that Libby is a victim of an overzealous prosecutor, a poisonously partisan process and a confused testimony. If Cohen and Hitchens can find themselves on the same side with me on Libby, perhaps there are liberal politicians who will too. Whatever the case is, the president should act. Disgraced and possibly broke, Libby has suffered enough.