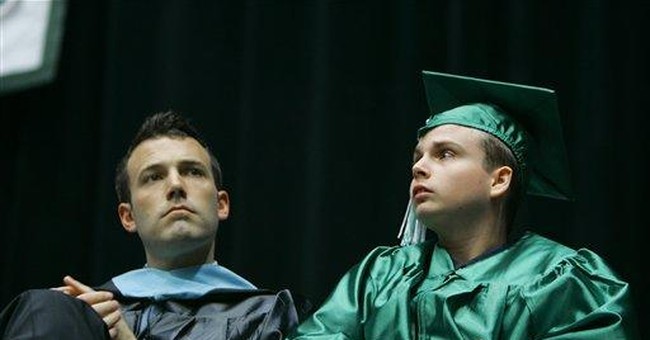 WASHINGTON -- I think we can all agree that the most inane speeches delivered nowadays in America are delivered at college commencement ceremonies. Oh, to be sure, speeches intoned at high-level meetings of the Loyal Order of Moose, the Rotarians and the National Organization for Women are also vacant, pompous and often delusory. Yet all such orations come off as Lincoln's second inaugural when compared to the bloviations exhaled on almost any American campus when it comes time for the students to don their mortarboards and parade past their adoring parents and snooty profs. Often the students wear funny shoes or carry things subversive and possibly risque beneath their graduation gowns. Helium balloons are attached to their caps, and occasionally noisemakers -- borne surreptitiously on their persons -- make rude sounds of bodily functions. Such are the antics of graduating seniors at our great institutions of higher learning this season, and frankly I support them in their obstreperousness.

The speechifying that they have to endure is usually excruciating. A few weeks back I was forced to sit through graduation ceremonies by a member of my family who insists on the solemnity of tradition, and in his eyes graduation ceremonies are a tradition. I wish I had brought an air horn. On the first day of the ceremonies I was forced to listen to a supremely self-satisfied "electric violinist" from some rock band exhort all within earshot "to dream" and to make way for "change." Starting with President Ronald Reagan, my fellow libertarian conservatives have made enormous "change," change unforeseen by two prior generations of progressives. Apparently this is not the change that the oaf at the podium was prescribing. Precisely what he did mean by change remained vague but sounded frankly old-fashioned. The following day I endured a popular novelist, employing the same thoughtless platitudes. In addition he condemned war conducted by politicians. Possibly he favored military dictatorship. His was not a very precise mind. From his remarks on the Vietnam War one might conclude that it was raging in 1977, the year of his own graduation. He insisted the war's casualties were all around him.

My low opinion of commencement speeches was confirmed recently when I read a summary of them in The New York Times. Yes, of course, most of the speakers' truths were hackneyed and dubious. America was widely compared to Imperial Rome in its last days. It is a tired thought that has been reverberating through the Republic for decades. Exhortations to do good were monotonous. Gandhi, the Reverend Martin Luther King Jr., and Mother Teresa are frequently held up to the graduates as role models, albeit without menacing the division between church and state. Yet what struck me was how passe and anti-intellectual the speakers were.

There was the aforementioned electric violinist and the popular novelist. Both were sufficiently trite to make it into the Times's summary. Angela Davis and Gloria Steinem also made the cut. Davis, renowned for being the third women ever to appear on the FBI's Most Wanted List, was once a communist and perhaps still is. Could the faculty at Grinnell College where she spoke not also find a flat-earther to complement her antique views? She droned on with the utmost smugness, saying things that were at once incomprehensible and clearly stupid. Quoth Comrade Davis, "For you will never discover a scarcity of facts, and these facts will be presented in such a way as to veil the ways of thinking embedded in them." It got worse, but my space is limited. Steinem complained about typing requirements imposed on her when she was a student at Smith College back in the 1400s or whenever she matriculated there. Such requirements were not imposed on her contemporaries at all-male Harvard. Steinem is the same feminist famed for such lines as, "A woman without a man is like a fish without a bicycle," and "In my own mind, I am still a fat brunette from Toledo, and I always will be."

Over the past three decades the politics of our democratic republic have changed. So far have the values of libertarian conservatives permeated the land and replaced the ideas of the welfare state and of the social engineers that we can say America's right has won the political battle. But the old liberal left won the battle for the culture. The social and intellectual culture of the country is polluted by ideas that are antagonistic to market economics, deferred gratification and civic responsibility -- all being the values necessary for a prospering middle class. This (SET ITAL) Kultursmog (END ITAL) broods over commencement speeches as it broods over the campus itself. It is very old-fashioned, but I think we can all agree it is enormously amusing. An "electric violinist" sending graduates off to the adult world of a global economy -- ha ha ha.