Lincoln in the Library 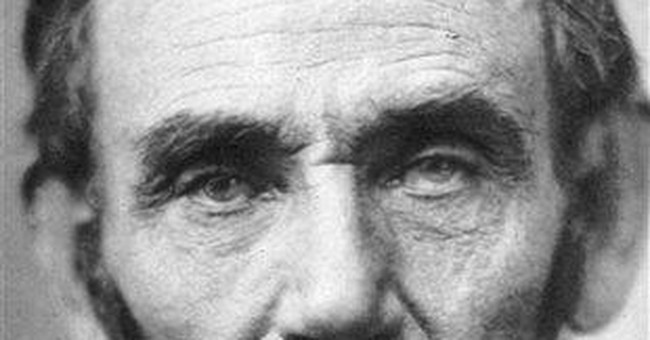 WASHINGTON -- I begin most days in the library of my northern Virginia home a couple of blocks from a Confederate war memorial. From atop a stone pedestal, a young soldier, hands clasped on the muzzle of his rifle, peers forever south toward Richmond, once the capital of the Confederacy. Two blocks from the brooding soldier I sit, taking my coffee and reading the morning newspapers under an enormous picture of Abraham Lincoln. It is my first irreverent act of the day, but on a good day it is not my last.

The library is known in my family as "The Lincoln Library," because of this old picture of the savior of the Union. Given by the president's son to my great-great-grandfather, its thick mahogany frame bears a bronze plaque, which reads: "Presented To P.D. Tyrrell, U.S.S.S. By Robert T. Lincoln April 14, 1887 For Loyalty And Service To His Father Abraham Lincoln." April 14 was the date on which the president had been shot 12 years earlier on Good Friday. That Easter Sunday, it would have been a rare church that did not echo with comparisons between the assassinated president and Christ. I assume it was not coincidental that Robert Lincoln made his gift to my ancestor on April 14.

In a fine new book, "Land of Lincoln," my friend, Andy Ferguson, describes how the eponym of my library has been reinterpreted through the years, usually through evolving contemporary values. Recently, you will recall, Lincoln was reintroduced to the reading public as gay. Soon he will doubtless be presented as an opponent of global warming. Former New York Gov. Mario Cuomo has served up the resolute conqueror of Confederate armies as a likely opponent of the war in Iraq. "Lincoln hasn't been forgotten," Ferguson writes, "but he's shrunk" to conform to our "wised-up world." It is only a matter of time before Bill Clinton announces that the 16th president is endorsing Hillary and, perhaps, making a small donation to the Clinton Library, possibly through a Swiss bank account.

For some reason books on Lincoln are suddenly in season. Another superb book just out is Thomas J. Craughwell's "Stealing Lincoln's Body." The book explains how I came to be the possessor of the aforementioned picture. In the 1880s my great-great-grandfather was a Secret Service agent pursuing counterfeiters, for that was then the Secret Service's main duty. Counterfeiting and stealing bodies for ransom were major crimes in those days. When Captain Tyrrell got wind of a plot by Chicago counterfeiters to steal Lincoln's corpse from its burial place in Springfield, Ill., he maneuvered to insert his agency into a police action that might otherwise have been left to local authorities. Mark it down as another expansion of federal authority. From the attempt to steal Lincoln's body on, the Secret Service's responsibilities for presidential protection spread.

The attempt itself was comic, described by a reviewer at the Times of London as a plot hatched by the three stooges. Craughwell's books conveys the comedy and more serious stuff: the tragic assassination at Ford's Theatre, the suffering of the Lincoln family, crime and police work in early Chicago and the drama of the now forgotten Lincoln Guard of Honor, which took it as a sacred trust to protect the Lincoln remains from ever again being desecrated. Craughwell's book would make a hell of a movie. I admire both of these books, but apparently in my admiration I can be viewed as an oddity, at least by New York Post columnist John Podhoretz, who has written about the Ferguson book. In a column of tortured praise for it, Podhoretz notes that, "writers don't really root for each other. Usually they root against each other." Well, many of us writers have long been in awe of Podhoretz's essential smallness. Here he reveals himself as so cemented in it that he psychologically projects smallness on the rest of us. Acknowledging that Ferguson has written a fine book, Podhoretz confides, "The dark secret is that I would have been happy to think 'Land of Lincoln' wasn't very good." It takes a person of colossal narcissism to make such an admission in public, but I thank him for it. The ass has given me another good day.